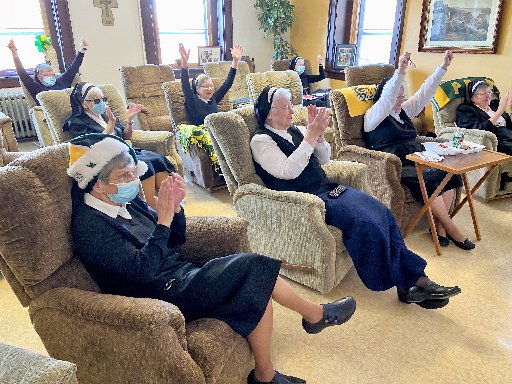 MANITOWOC, Wisconsin – At the western end of Manitowoc, atop a hill overlooking scenic Silver Lake, is the historic Holy Family Convent.

Mother house of the Franciscan Sisters of Christian Charity, its sacred rooms, embellished with respectful works of art, are serene and cozy.

There is one room in the 19th century building, however, where it can get quite busy. And so it was on January 9, when the Green Bay Packers faced the Detroit Lions this Sunday afternoon in the final game of the 2021 regular season.

On the second floor of the convent, the sisters gather in a spacious living room to regularly watch their beloved Packers play. Set up with rows of armchairs facing a 54-inch flat-screen TV, the living room has pops of green and gold – the team’s colors – that contrast with the sisters’ black-and-white habits.

“It’s the loud bunch,” Sister Barbara Mathe said with a smile. In another room, just down the hall, other sisters were gathered to quietly cheer on the Packers, she explained.

On a wall in the living room hangs a framed Packers jersey that reads “Thank Heaven for 87.” It is autographed by former Packers catcher Jordy Nelson.

A nearby Christmas tree was decorated in green and gold. Other memorabilia the sisters have accumulated over the years include an autographed football from Packers players, a cheesehead hat, caricatures of Packers coach Matt LaFleur and general manager Brian Gutekunst, and a signed photo of the late Reggie White, former Green Bay defensive end.

A core group of sisters have been “lifelong” Packers fans, Mathe told The Compass, the Diocesan newspaper of Green Bay.

Describing herself as “an avid fan”, she has been a Packers fan for as long as she can remember.

“Bart Starr, Forrest Gregg, Jerry Kramer, Paul Hornung… all the oldies,” Math said, ticking off the names of the greats she looked up to. “And Vince Lombardi, of course, because of his behavior and the way he coached the players. He was a player coach, like Matt LaFleur, he’s a player coach.

After missing much of last season because she contracted COVID-19, she was thrilled to be able to join her sisters in the living room.

Because the Packers had already clinched the NFC’s No. 1 seed before this game, the sisters got to watch not only their favorite starters, but also promising reserves.

“It’s been an awesome season,” Mathe said. “I really admire the character of (wide receiver) Davante Adams. He behaves like a gentleman. And I think our running backs (Aaron Jones and AJ Dillon) are great. What a pair.

And when the Packers aren’t doing well? “We watch anyway and sympathize with each other, and say, ‘Next week,'” she said.

Initially, the sisters followed their favorite team on a small TV.

“Ex-Packers coach Mike Sherman came here and saw our TV baby and gave us a big screen TV so we could actually watch Packers games,” Mathe said with a laugh.

This TV “has run out. It has been used so much,” added Sister Paula Vanden Hogen. She began to follow the Packers more closely as the enthusiasm of the other Packers sister-fans at home began to rub off on her.

“It has been an exciting season. Difficult, but exciting. I think the Super Bowl is in sight for the Packers,” said Hogen, a native of Little Chute, Wisconsin.

The road to the Super Bowl gets a little closer for the Packers on January 22, when they face the San Francisco 49ers, who beat the Dallas Cowboys on January 16.

Wearing a Christmas Packers-style hat while watching the game, Sister Carol Seidl explained that when she was teaching, students gave her Packers gloves, scarves and socks “galore.”

The Packers were a big part of his life growing up in Luxembourg, Wisconsin. His father had Packers season tickets and attended the 1967 “Ice Bowl” – the NFL championship game between the Packers and Cowboys.

Her brother recently lent her his four-volume book on Packers history and gave her a DVD about former offensive lineman Jerry Kramer, which she will share with her fellow Packers enthusiasts at the convent.

Sister Christine Stoller, who loves to knit during breaks from the game, grew up in a family of Packers enthusiasts. She is originally from the Algoma, Wisconsin area.

“My mom loved (wide receiver) Donald Driver. She got up and did her little dance when he did something good. She was wearing her jersey,” Stoller said.

His brother, a retired professional photographer, used to photograph home games during the Bart Starr days.

“They’ve had a lot of injuries this season, but they’ve done well. They have a shot at the Super Bowl. Maybe this is the year,” Stoller said.

Weiss writes for The Compass, the newspaper of the Diocese of Green Bay.