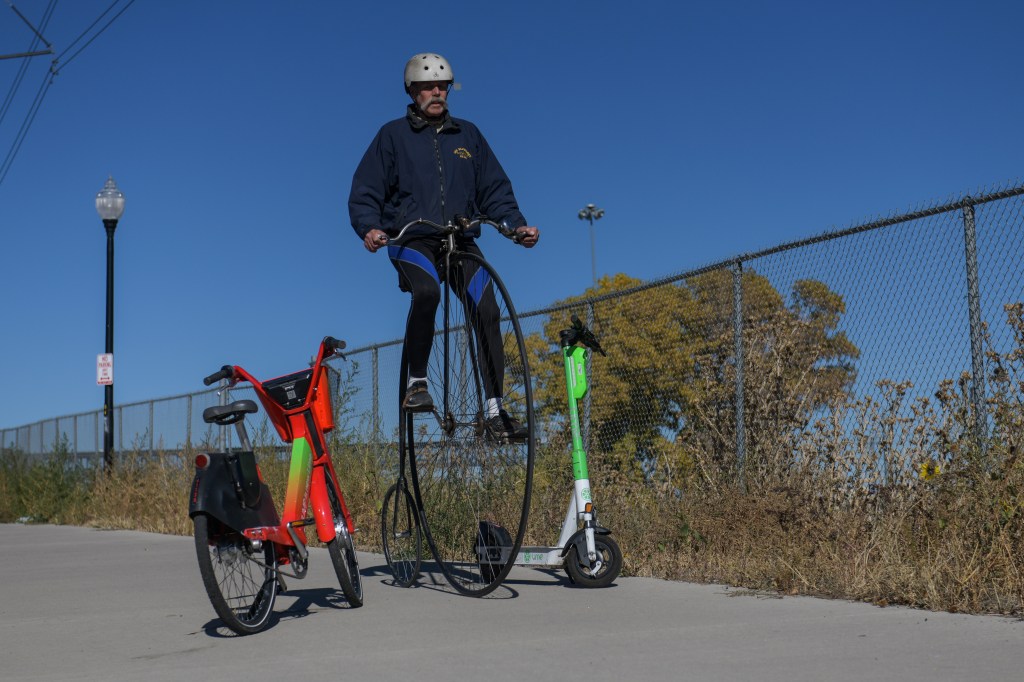 Who’s Who Rides Big Wheels in North Denver? It’s Paul Brekus, and he wants you to wave.

Paul Brekus is used to stares, waves, heads bowed in wonder, bulging eyes like in a cartoon, as he roams the neighborhood with his strange and wonderful contraption.

“See! Look at this!” a mother said to her daughter one November day, calling the young girl’s attention to a nearby park bench.

“Dude, that looks dangerous like (expletive),” one teenager said aloud as Brekus walked past.

A policeman gave a giant thumbs up from his car window. An older woman greeted enthusiastically from a bus stop outside a retirement home. Children and adults would say the same phrase, “What … is this thing?” “

If you live in North Denver, you probably already know Brekus – or at least you smiled and waved your hand as he happily cycled past you, perched on top of his replica of a bike. from 1885 Victor. It is from up there, well above traffic, pedestrians and the rest of humanity, that Brekus watches the world go round.

“There is an old saying,” Brekus said on a hot November afternoon. “The world smiles when you are on a penny-farthing.”

It’s hard not to smile when you see Brekus drive past its vintage race – the giant 60-inch front wheel leading the way, the 20-inch rear wheel obediently dragging like a younger brother following his older brother wherever he goes.

The 67-year-old retired IT professional first got into penny-farthings in 2000, “because I’m crazy,” he said with a smile. It was a match made in two-wheeled paradise for the antique lover, who also collects phonographs and telegraphs and runs a record-cutting business in parallel.

These bikes were commonplace in the late 1800s, which is why they are called “standard” bikes (at least in Brekus’ world). That chic road bike sitting in your garage? “It’s a ‘safety bike’,” said Brekus, adding that he doesn’t like when people call it ‘big wheel bikes’.

The most common question he asks himself: “How do you get this thing up (or down)?

The short answer: it’s a production in motion. Brekus slowly advances the penny at first, as it would fall off if it rode like a normal bicycle. He pushes the bike from behind, moving slowly, before lifting his foot onto a small step in the back of the bike, catapulting his 6-foot-2 frame over the seat and into the pedals.

It takes about 15 minutes to learn and about an hour to get comfortable on a penny-farthing, Brekus said. He’s a fan of “emergency teardown,” which basically means jumping off the back of the bike like it’s on fire.

“It falls in style! he said, quoting Buzz Lightyear’s phrase.

Penny-farthing is not for the faint of heart, however. Brekus has had two accidents, including one 20 years ago on Interstate 80 that sent him to hospital. His two front teeth paid the price, and he still has a scar under his mustache.

Brekus, however, mostly cruises in town, disappointed if he doesn’t reach 100 miles by the end of the week. The Berkeley resident loves the Clear Creek and Cherry Creek bike trails and often loops around Washington Park. He’s proud to say he’s been up Lookout Mountain three times, although the descent made him think, “I’m going to die.” Brekus has already covered 116 miles in one day, trekking to and from Palmer Lake.

The old-fashioned bike is actually quite comfortable once you’re up there, that is, “until you fall,” Brekus said with a smile. But it is the smiles and the reactions of those around him that give him the greatest joy.

“You have to check your ego often,” Brekus said. “They’re excited about the bike, you’re not. “

He recalls driving near the intersection of 15th Street and Larimer Street in downtown Denver, when a Rastafarian shouted, “Thanks for playing with my fragile sense of reality!” “

“I almost fell off my bike,” Brekus said with a laugh.

On a recent drive through Sunnyside, Brekus has turned heads at every intersection. He wore a “Popeye the Sailor Man” cycling jersey and sported a white handlebar mustache befitting a popular biking man when Grover Cleveland sat in the Oval Office.

A pair of teenagers jumped off their scooters to take a video on the Cherry Creek Trail as Brekus ducked to avoid hitting his head on a bridge – something that has happened before, he said . A man passing by on his bicycle muttered, “It’s (curse) sick.”

At 67, Brekus just hopes to keep riding until he can’t anymore.

“I’ve always joked that the way I want to go out is to be lined by a steam engine,” he said with a smile.

This story is part of Denver Post’s Faces of the Front Range project, highlighting the Coloradans with a unique story to share. Read more of this series here.

10 celebrities with the most exquisite and expensive Lamborghinis