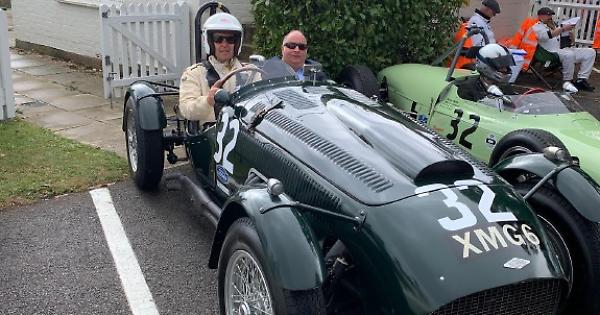 A CLASSIC and sports car showroom and storage room has opened in Watlington.

The couple started the business in 2017 and were based in Taplow but decided to relocate as they needed more space.

Mr. Cullen, who lives in Chinnor, previously worked for Aston Martin and Rolls-Royce and Mr. Gray, of Russells Water, was a client.

They became friends through their shared passion for cars and decided to go into business together.

Mr. Cullen said, “It was because of the success of the business that we needed more space.

“In our old location, we stored and sold cars from a 5,000 square foot building, but now we have the same sizable storage space and a specially designed showroom, which took five months to build.

“Our warehouse consists of managing collections of private cars. We have a few customers who have multiple cars with us. We don’t do a restoration but we make sure all of our cars are in the best condition possible and we have a partner company in Haileywood Specialist Cars in Shiplake which we use to service all cars.

“In our industry, a lot of what we do is about networking, so we’re also a destination for enthusiasts to come and have a look and chat.

“I have always been in and around the auto trade and have extensive experience with classic and vintage sports cars.

“Cliff is involved in classic car racing and was a client of mine and we became good friends. He works in financial services and therefore advises me on regulations and other things while I take care of the day-to-day management of the business.

“I’m the floor and a bit of a croupier and he’s the money man, so we complement each other.

“The first day we bought some shares and were lucky to have a fairly loyal customer base since I worked for Aston Martin and Rolls-Royce. Customers tend to follow you everywhere. The couple started the business with around five cars, but they now have more than 30 in their showroom, including models from Jaguar, Aston Martin, Mercedes, Bentley, Ferrari and Porsche.

Mr Cullen said: “The first year was the toughest because starting a showroom involved a lot of expense, such as alarms and security, website building and stocking. It was pretty hard work.

“We probably broke even in the first year and since then it has only increased.”

He said he “feared the worst” when the coronavirus pandemic hit last year, but found that when they could open between closings, there was pent-up demand.

Mr Cullen said: “The pandemic has been difficult for everyone, but the five or six months we were able to trade last year were probably the best time we have had.

“With wealthy clients not being able to travel, they were looking for other ways to spend their money and to some extent the increased number of stays also helped people get out and drive.

“We’ve also seen some of the biggest classic car events return, which will hopefully continue, and that has garnered more interest.”

Mr Cullen said Britain’s exit from the European Union affected the company more than the pandemic, as it made importing and exporting cars more difficult.

He said: “Transferring a car to Europe before Brexit was quite transitory, but now it’s more complicated with the legal aspects.

“Last week I sold one to a customer in Germany and I’m selling in continental Europe. I have also sold to USA and New Zealand in the past 12 months.

He said: “I like things that are a little eccentric and not mundane. We have a pretty eclectic mix to suit all tastes and budgets.

“We have things like an Aston Martin DB4 Series 1 and a Jaguar SS 100 up to a
Citroën 2CV Dolly, which is in immaculate condition.