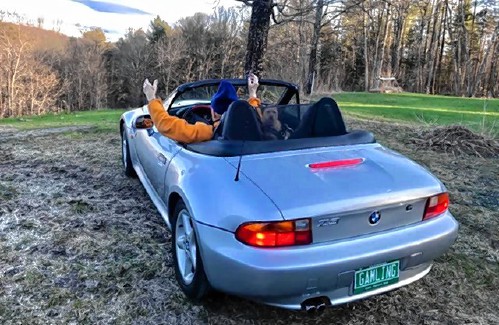 We had a guest for the night which made the housekeeping staff (me) buzz. I washed the sheets and pillow cases in the guest bedroom, hung a cool towel in the guest bathroom and even dressed my corner of the house, making the bed with the winter flannel sheets and putting a new denim duvet cover on the old duvet. There was a little fly in the ointment: the kitchen sink drain was slowing at a breakneck rate, but I could live with it for a few days.

With no rain in the forecast, I could see my guest and I zooming in on Smugglers Notch in the roadster, calling ahead from the notch for a table outside the Jeffersonville restaurant, and after lunch. , heading south past Mount Elmore in time to take Kiki for a walk in Hubbard Park. Then crackers, cheese and a chatty drink before dinner at a local restaurant. A perfect plan.

However, as I rinse out the coffee cups on Saturday morning before leaving, I couldn’t help but notice that the sink drain had finally gone on strike. Half an hour later, as we approached the Waterbury exit on I-91, we discovered that the exit traffic was backing up half a mile on the freeway. The realization suddenly struck: other people were hoping to go to Stowe and Smugglers Notch and look at the leaves; Route 100 would be bumper to bumper and stop-and-go all the way; other drivers would also be frustrated; and it was a bank holiday weekend. Really, as the saying goes, we are not alone.

The exit ramp on the left was empty. I took it, sensing the suspicion from the pilots as I passed that I intended to skip the line ahead. In this roadster, I get no sympathy and little respect. Hell, I wouldn’t love myself if I saw myself walking by. But we were just pulling away. It was the start of a full day of sorry-we-are-full and we-close-early. But it ended happily, in a restaurant with room for us and, the next day after another stroll, with a shared quesadilla and extra-friendly service downtown before my guest left for the road to the city. South.

On Sunday night, during our bi-weekly Zoom call, I was expressing my frustration to my kids in Arkansas when my son suggested an alternative. How did the old car work? When I replied, “Oh, like a Swiss watch! I really like this car! he suggested that I focus this week on the happy things: the random treasures that I have accumulated over the years that have become like works of art. Almost everyone has them.

He suggested my old Winchester to me, which he will inherit. I bought it at Saranac Lake in 1958 for $ 58. Over the years his sights have been altered to accommodate my changing vision, but the sound of that silky leverage, I would know anywhere. The stock is in black walnut. A few small notches cut into its underside trigger memories of youth, strength and death on cold November afternoons.

The 1964 DeWalt radial arm saw in the store never faltered when I touched its switch. I bought it when building my first house, and it cut everything from posts and rafters to fancy dome work. I converted it to 240 volts when it got to his current home in Vermont, and it really zacks up. It’s not going anywhere else as long as I have something to say about it. We’ve been together for too long.

The first time I went to work in the woods, I noticed that all of the elders carried Case knives. It was instant love, but mine isn’t in a drawer; I use it every day in the kitchen. When I do, I can almost smell the birch kindling, beech stove wood, kerosene and bacon.

It took 40 years to acquire the guide boat. It truly is a work of art, with poetry in every row and 9ft birch oars that flex when I pull. Behind the boat, the twin whirlpools of their passage extend as far as the eye can see. In a way, I can look at myself from a distance and revel in the movement.

The little silver German roadster was almost 60 years old. Finding her was a fluke. She is old and I am old. I promised her when we first met that I would be as considerate as possible. So far, so good. It’s powerful, but quiet, which I love, only emitting a little “kick” when I change gears. In those last fall days before she’s covered up for the long winter, I sit down, help her do what she was designed to do so well and rejoice that we’re both old. when we got together.

Willem Lange can be contacted at [email protected]

Chattanooga is racing for a three-day auto festival. Here, the Grand Marshal shares the details.