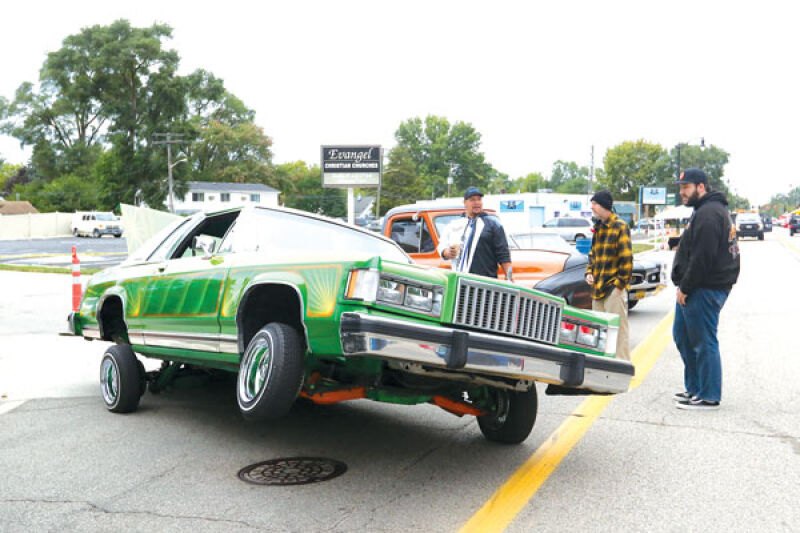 Onlookers are introduced to a highly customized 1989 Mercury Grand Marquis.

Jammin’ at the Junction was established by the Roseville Downtown Development Authority. Eric LaFata of LaFata Auto Body is a member of the DDA and coordinated the event.

Jammin’ at the Junction brings out a lot of cars on September 24th. 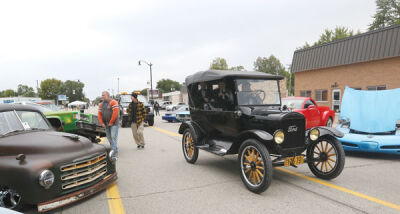 Ron Fuller, a 1983 Roseville High School graduate, arrives at Jammin’ at the Junction in his 1924 Ford Model T with cutouts of comedy duo Stan Laurel and Oliver Hardy “seated” in the back.

ROSEVILLE – “Isn’t it pretty?” said Mike Pankake as he opened the front passenger door of his red 1965 Chevy Impala. “Everything is custom. There is nothing stock on the car. The dashboard is completely digital. It is a fuel injected engine.

Pankake, of Clinton Township, was among the classic car owners who headed to Utica Road in Roseville on September 24 for the annual Junction Jammin’. His Impala won Best Show.

“The values ​​were similar,” said Pankake, who traveled to Texas to trade.

To give the Impala a unique look, the side mirrors were removed. When he visits local car shows, such as the Harper Charity Cruise in St. Clair Shores and the Woodward Dream Cruise, he always encounters people with their own stories about the 1965 Impala.

“From young to old, I hear stories: ‘My mom had this’ or ‘That was my dad’s first car,'” Pankake said. “I think that’s what’s great about cars.”

This year marked his first appearance at Jammin’ at the Junction.

“It’s a nice collection of people,” he said.

Utica Road was closed from 12 Mile Road to Gratiot Avenue for the event. And although it appeared that the rainy weather that day kept some people away, those in attendance enjoyed the show.

“This is a big event for the town of Roseville,” said Macomb County District 11 Commissioner Harold Haugh, adding that the Shelby Cobra was his favorite model. “It’s the kind of thing that our fellow citizens appreciate.

The same goes for the others, because when Ron pulls it out, “They give me a thumbs up,” he said.

This is the first Ford for Jason.

“I’ve never had a Ford in my life. I saw this, and I had to have it. I was looking for a classic car. I kept coming back to this one. It was either tinkering with an old car or being reliable,” said Jason, of Chesterfield Township. He appreciates the characteristics of the vehicle.

“Mustangs are a great vehicle to have,” Jason said.

During the event, many people stopped to admire Victoria Doebler’s 1955 Ford Victoria.

“I got it about three months ago. It’s a 272 engine,” she said of the pink and white model. “I love driving it on the street. People look at the car.

“Isn’t it beautiful?” is one of the comments she hears. While at a car show with her husband, David, Doebler’s brother-in-law spotted the classic car.

“I like it to be nostalgic. I love the interior,” Doebler said. “I like that it kind of has my name on it. Reminds me of the good old days. »

The Ford Victoria does not have power steering or power brakes.

“That’s the worst part. My grandfather had a car like this growing up,” Doebler said.

The Roseville resident regularly attends numerous motoring events, including the annual Cruisin’ Gratiot in Eastpointe and the Lakeside Mall Circle Cruise-In on Monday nights in Sterling Heights. Hot Wheels Weekend in Marysville, where she got an autograph from Mickey Dolenz of Monkees fame, “was a lot of fun.”

“A lot of little girls get in my car and take pictures,” Doebler said, adding that it reminded them of Barbie.

Ron Fuller and his father-in-law, Greg Rico, greeted onlookers as they viewed their vintage vehicles. Fuller, a 1983 Roseville High School graduate who now lives in Avoca, Michigan, owned perhaps the oldest car there: a 1924 Ford Model T. Rico, from Roseville, brought his 1939 Ford Deluxe Rico bought the Ford in 1981.

“I was driving for a trucking company and the car was in a junkyard in the 16 Mile and Van Dyke area,” Rico said.

Rico made an offer on the car but was initially turned down by the owner. The car stood still for a long time before he made another offer, and this time the owner “accepted it”.

“The car was quite solid. It’s very nice,” he said. “I just wanted an old car, a classic car.”

Fuller said there was a time when Rico and his mother, Jean Rico, dressed as gangsters and rode the car in parades.

“They got a lot of applause,” Fuller said.

Fuller bought the Model T with his high school graduation money. He liked the look of the Model T because it reminded him of the car in “The Beverly Hillbillies.”

“It was junk when I got it,” Fuller said. “Everyone laughed at me”

But not for long, as Fuller was able to use everything he learned in auto shop classes to restore the car. It took him about five years to complete the job. He often takes the car on country roads with his children, who grew up with the classic car that can go as fast as 30 mph.

“It was a fun car,” he said, adding that it could even run in the moonlight.

Jammin’ at the Junction was established by the Roseville Downtown Development Authority. As a liaison with the DDA, Roseville Administrative Services Specialist James Gammicchia was the city’s contact for the event. Several sponsors also made the event possible. Eric LaFata of LaFata Auto Body is a member of the DDA and coordinated the event.

“Many hours and a lot of effort go into putting together an event like this, and we are eternally grateful to him and the rest of our volunteers and staff for their incredible effort and hard work. “Gammicchia said via email. “We are also grateful to the many sponsors of Jammin’ at the Junction 2022.”