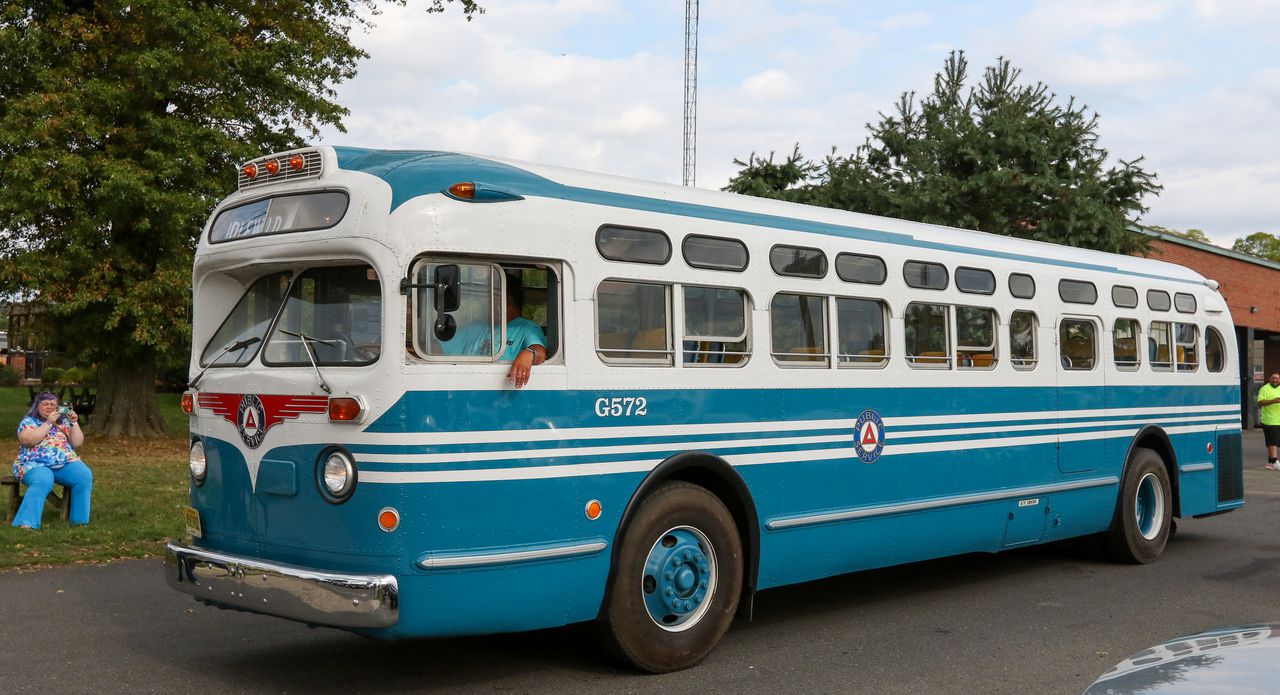 Perhaps nothing can be as unloved as an old bus. The seats aren’t as solid as they used to be, the upholstery is faded or even torn, the paint is peeling, and the body is dented with the battle scars of hundreds of thousands of miles it rolled up moving the people.

But there are people who see their faded beauty, save old buses from the scrapyard and make them look and run like new. They are bus collectors, ranging from former bus drivers who bought or kept a favorite bus, to mechanics and an organization that owns nearly 40 historic Garden State buses.

One place where this love of the bus was on display was the annual Bus Festival hosted by the Friends of the New Jersey Transportation Heritage Center on September 17 at the Starr Tours bus facility in Trenton. About 500 people were there to see the 37 vintage buses ranging from the 1950s to the early 2000s. Yes, the recent buses are now retired and being saved.

What’s the attraction? Old buses are like a time machine, transporting them back years and decades and evoking memories of their lifetime.

“I don’t feel old, but when I get behind the wheel it brings back memories,” said Tom Gamaro, 74, of Belleville, a Friends volunteer who drove for Public Service Coordinated Transport, a company that has preceded NJ Transit. , where he still works.

Secaucus’ Glenn Schmelz retired as maintenance manager at NJ Transit after 50 years. He also started his career in the civil service. He is now the man in charge of keeping the Transport Heritage Center’s antique fleet on the road. Gamaro retired after 40 years with NJ Transit, only to return three months later in a new role as terminal supervisor at the Port Authority Bus Terminal.

Every time they get out of the vintage buses for a show, the children are fascinated by them, but it’s the old people who tell the stories about driving that particular bus and their life at that time, he said. declared.

“Every time we go to an event, it’s the parents talking to you for half an hour, reminiscing about public service and telling you stories,” Schmelz said.

“NJT 1” is one of the memory makers, a 1957 General Motors coach that was a former public service bus that reached the NJ Transit era. After that bus was decommissioned, it was “hidden” in Newark Central’s sprawling bus facility for future preservation, he said.

When Shirley DeLibero, the agency’s executive director, saw it, she made it her personal bus and converted it into a rolling conference center to inspect the transit system, Schmelz said.

“She went around the state on that bus,” he said.

Gamaro and Schmelz are among a dwindling number of bus drivers who know how to drive a bus with a standard transmission that the operator changes gears. Everything was manual in the old buses, the transmissions, the steering, even the doors, they said. Today, they are all automatic and assisted.

During the parade of buses, some spectators greatly appreciated the driving power of the old buses. A bystander shouted “It’s labor” as a bus driver steered a 1960 GM Fishbowl bus, named for the bowl-shaped front windshield, down East State Street.

Collecting buses is not an easy hobby. Some people who bought retired buses gave them away to friends because of the cost of storing and maintaining them, Gamaro said.

NJ Transit has also helped preserve “new” vintage 1990s and early 2000s buses that have been retired from active service, as have Lakeland, DeCamp buses and Helfrich and Sons, and New York MTA.

“They help us a lot. The organization’s top executives worked for the public service, Transport of New Jersey, and NJ Transit.

Many guest buses came from all over the county, including a former 1981 Piedmont Coach Lines MC-9 coach owned by Santos Lewis.

“It’s like buying old cars, but on steroids,” Lewis said, proudly wearing his Trailways uniform where he drove buses for 40 years.

Being a charter bus driver was a lifelong dream, and Lewis started booking charter buses as a high school student. After serving in the military, Lewis began his career with Continental Trailways first cleaning and maintaining buses and finally driving.

“I bought this last year from Lowes Bus Line of Georgia, I was looking for an MC9 (bus) with a 5-speed manual,” he said. “I have this to restore and a 1990 MCI that was DeCamp’s brother (bus lines) 497 (parked) across the street.”

A friend pressed the button and the diesel engine purred in the back of the bus, a sound Lewis called “music to my ears”.

“The MC-9 is the most popular coach, it was the mainstay of Trailways, Greyhound, Marx…it’s the toughest of them all,” he said, the third owner of this MC -9. “These are real buses.”

The MC-9 was also the backbone of NJ Transit’s first new bus fleet, when the agency ordered 700 between 1982 and 1984, which were purchased by the Port Authority and leased to NJ Transit. Commuters knew them for the large dot-matrix destination sign some had in front.

Inside his Piedmont MC-9 bus was a tribute to the people who helped Lewis during his career as a bus driver and collector. Blank sheets of 8×10 paper had their names and in some cases death dates commemorating his friends and colleagues.

Historic buses are also screen stars, and the Friends collection is exploited for television and films such as Marvelous Mrs. Maisel, A Bronx Tale and the Joker where they created more memories for people.

“We like meeting people, talking about old buses, Gamaro said. “They sit in the seats and remember when.”

This article is part of “Unknown New Jersey,” an ongoing series that shines a light on interesting and little-known stories about our past, present, and future — all the unusual things that make our great state what it is. Do you have a story to tell? Email it to [email protected].