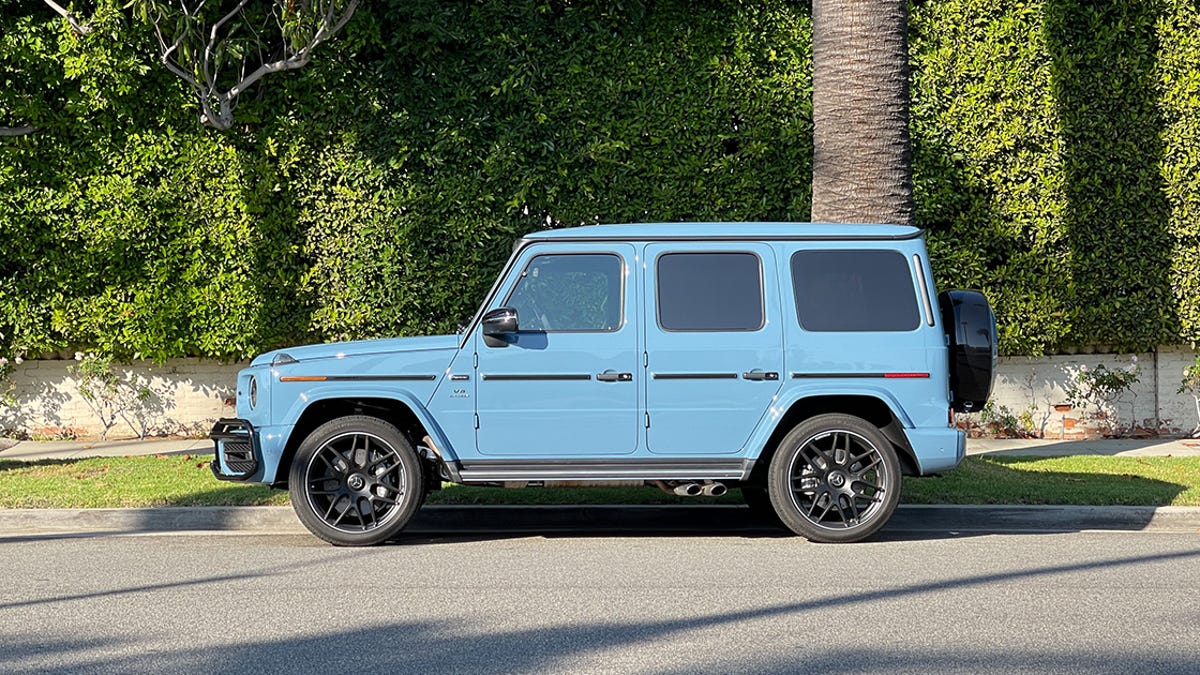 The Mercedes-Benz G-Class would be my car forever

A common topic of conversation for car enthusiasts revolves around what your “forever car” would be, the one you would be happy to drive for the rest of your life. People usually take a while to make up their minds, eventually choosing sports cars like a Porsche 911, maybe a classic like a 60s Ford Mustang or something modern and practical like a Audi RS6 Avant. My answer is always simple and immediate: the Mercedes-Benz G-Class.

I could say that the feeling I get from the G-Wagen is hard to describe, but that would be a lie – it’s pure bliss. It doesn’t matter what car I drive or ride in, whether it’s a Mazda MX-5 Miata, McLaren 765LT Where Rolls Royce Phantom, if I see a G-Wagen going by, I think, “Man, I wish I was in there instead.” Hearing the distinct rumble of the V8 from blocks away tingles my Spidey senses, like a dog hearing a squeaky toy from across a room. The sight of its boxy body and cheerful face brightens my day immeasurably – there really is no other car quite like it.

The G63 is overkill, and that’s the whole point.

From Shahs to Sunset Boulevard

The Geländewagen (German for “all-terrain vehicle”) was originally developed for military use at the request of the Shah of Iran, who at the time was a major Mercedes shareholder, but a civilian version was released in 1979. Initially a rugged and simple off-roader, the G received a major redesign in 1990 to be more luxurious and more suitable for the road. It wasn’t officially brought to the US until the early 2000s, when it quickly became a status symbol for those who deemed a Range Rover too basic and boring. Mercedes continued to evolve and improve the original G-Class throughout the 2010s, delivering ridiculous models like the G65 and the V12-powered convertible. Maybach G650 Landaulet. But even then, it still looked like the nearly 40-year-old truck it was.

Fast forward to January 2018, and Mercedes unveiled the all-new G-Wagen in Detroit with the help of pyrotechnics, Arnold Schwarzenegger and waiters handing out schnapps shots. This new G was something of a revelation, completely redesigned from the ground up but still retaining the iconic design. Fewer than 10 parts carried over to next-gen, all of which were cosmetic items or invisible components. Above all, the G-Class drove and felt like a 21st century car that deserved its price tag of over $130,000, and its popularity exploded.

Mercedes sold 41,174 G-Class SUVs globally in 2021, its best sales result since the model launched in 1979, including more than 8,500 in the United States. That would be a pretty astonishing number, even without a global pandemic and a devastating shortage of semiconductor chips. Add to that reports from eight months ago that Mercedes was closing order books for nearly all of its V8 models for the 2022 model year (something that has now largely been resolved), and G-Wagens across the country were getting six-figure profit margins from dealerships — and selling like hotcakes anyway.

And yet, I am not the least bit surprised. Living in Los Angeles, the undisputed G-class capital of the United States (and possibly the world), I usually see at least two dozen a day. The vast majority are new generation, and almost all are AMG G63s – Mercedes claims that more than 70% of G-Wagens sold worldwide are AMGs. I also see tons that have been modified by Brabus or Mansory, turning the dial well past 11 on the ostentation scale. The G550 is honestly better to drive than the AMG G63, with a slightly calmer demeanor and a smoother ride, but who wants calm in a G-Class? The G63 is overkill, and that’s the whole point.

I’ve found that generally people who “don’t understand” or hate G just haven’t been one before.

Over the summer I spent a week with a 2021 G63, using it as my daily driver doing everything from running errands across town to a long road trip through the Mojave Desert with my parents. Over the week, it wasn’t just me who fell in love with the G-Wagen. I’ve found that generally people who “don’t understand” or hate G just haven’t been one before. Even my mom, who has always been super cynical about the G (and luxury SUVs in general), came away from our road trip with a big soft spot for the G63.

For 2021, Mercedes has expanded the G-Wagen color palette with the G Manufaktur program, introducing newly developed hues and fabulous vintage paintwork. A ton of new interior color combinations also became available, with the ability to cover almost any leather surface with contrast stitching. My test car was painted China Blue, a spectacular $6,500 option from the 80s E-Class option catalog. I constantly had people taking pictures of the G63, and the reaction to color was overwhelmingly positive, especially from other G-Wagen owners. Now, about eight months later, China Blue is one of the most common non-grayscale colors I see on local Gs.

People laugh when I say that, but it’s hard to think of a better city car than the G-Class. Despite its hulking appearance, the G is actually a few inches shorter than a new Toyota Camry. It’s super tall, enough that it’s actually too tall for some parking lots, and the upright seating position and large, flat windows and windshield provide excellent visibility. Front turn signals mounted to the corners of the hood help the G’s handling, making this SUV super easy to place in tighter streets and parking lots. And unlike the G550, the G63 comes standard with a surround-view camera thanks to its lower brush guard. With 577 horsepower and 627 pound-feet of torque, the G63 hit 60 mph in about 4 seconds, which comes with a slightly terrifying rise from the front end and a dull roar from the exhaust. The new independent front suspension, well-tuned electric power steering, and modern stability control systems make the G63’s acceleration easy to control, and it’s a blast to weave through traffic. If you’re not giggling like a kid while driving a G63, you probably don’t have a soul.

The G63 is also much better on a long trip than you might think. Even with 22-inch wheels, the ride is damn good, and the front seats are supportive and highly adjustable. The rear seat, although a little tight for the legs of a large SUV, is also pleasantly comfortable. Features like adaptive cruise control, massaging seats, a Burmester surround sound system, configurable ambient lighting and actually usable cupholders make the G’s cabin a really nice place for a long journey. The interior is also pleasing to the eye, combining new Mercedes design cues with classic G-Class details. The new G also has the best elbow positioning I’ve ever experienced; the top of the door card and the lower armrest of the door are at the absolute perfect height and wide enough to comfortably rest your arm.

The redesigned G is also excellent off-road. In fact, it’s better than it’s ever been despite moaning about its revised suspension from bros driving old Wranglers. Although I didn’t take this off-road specific China blue G63 beyond some soft dirt roads, I took a G550 to an off-road park outside of Los Angeles and it dominated the trail of the toughest black diamond, all without a sweat and to the shock of off-road veterans in purpose-built SUVs at the park. The G63 is available with a rad Trail package which also adds all-terrain tires and underbody protection.

But the G-Wagen’s best attributes aren’t found on a spec sheet. One of the only parts to carry over from the old G are the door handle mechanisms and locks, which look like a bolt-action rifle being loaded and are absolutely addictive. Heavy doors make the world’s most satisfying sound when slammed, which is what you need to do to get them to close properly. Even getting in and out of the G-Wagen is an event. It’s just special.

Of course, the G isn’t without a few flaws. Its gas mileage is truly awful; after putting nearly 1,000 miles on the G63, including several long highway stints, my average was about 8 mpg — 5 mpg worse than the EPA’s city estimate. (The 16-mpg highway estimate is achievable, at least.) The G also still uses Mercedes’ old Comand infotainment system, which is controlled by touchpads on the steering wheel or a dial on the console. central. Apple Car Play and Android-Auto are standard, but the G lacks a touchscreen, and the dated operating system feels miles behind the MBUX setup in newer Mercedes models. And while the V8 should stick around for at least a few years, it certainly isn’t long for this world.

A facelifted G-Class is expected to arrive later this year, bringing a tech update and likely some new features, and a plug-in hybrid model is on the way. But the most important is a new version of the G-Class which will arrive for 2024: the fully electric EQG. It left me in shock for at least a few hours after it was unveiled in concept form at the Munich Auto Show last fall, in part because of the first video featuring tentacled aliens. .

Of course, when the G-Wagen switches to an EV powertrain, it will lose that signature V8 growl, but the benefits should far outweigh this downside. The EQG will have a motor at each wheel, giving it monstrous torque and better off-road capabilities than the standard SUV. Even if the range ends up being short, the EQG will still be much more efficient, and it will be able to go into congested areas and HOV lanes. With a lower center of gravity thanks to a large battery, driving dynamics should also be improved, and the EQG’s illuminated grille and styling updates make it cuter than ever. More importantly, the existence of an EV model will significantly extend the life of the G-Wagen.

I would be extremely happy to drive just a G-Wagen for the rest of my life, and the EQG makes that dream scenario even more possible. Now I just need to scrape together a few hundred thousand dollars.