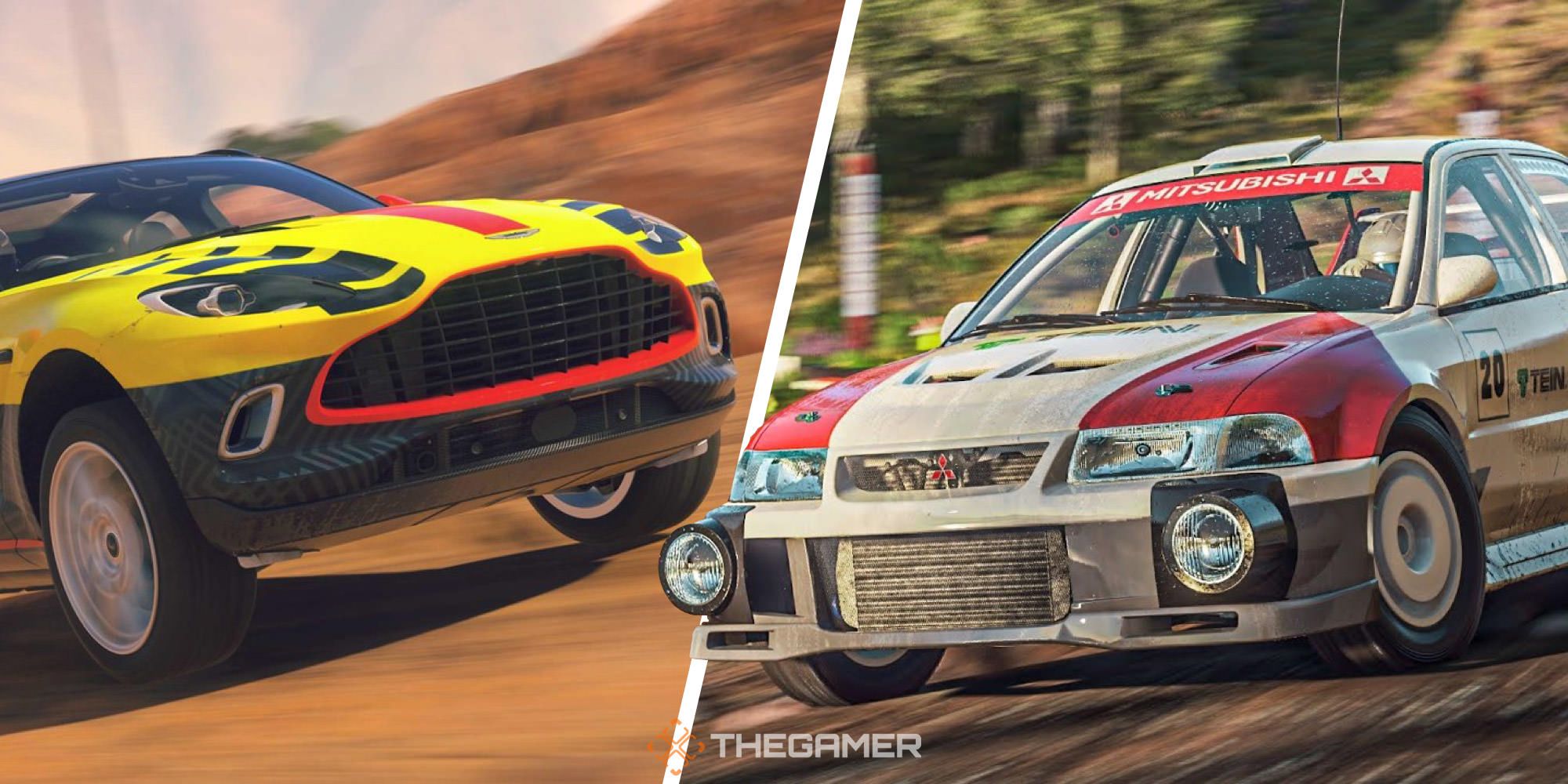 Where most racing games prefer to focus on concrete as the road, Dirt 5 chooses the unpredictability of off-road rallycross racing with a focus on rally car racing. The game, after releasing after some delays, obviously features a variety of different cars to try and drive in different categories.

From modern rally cars to classic cars, the game features an abundance of licensed cars to beat the competition. Things like a car‘s performance, its handling, and how a balance between the two makes some cars better than others. What helps create the best car for the wrecking shop in Dirt 5?

RELATED: The Most Realistic Driving Games

Updated February 7, 2022, by Joseph Metz Jr.: Since the release of Dirt 5, new content, most notably new cars, has shaken up the rankings when it comes to the best. Plus, there are easily overlooked vehicles that are still great cars that haven’t received the appreciation that others have seen.

This list is mostly about the best cars in the game as a whole, rather than each individual class. There is a list of the best Dirt 5 cars for each class available now, so check it out if you need it. For the best overall cars in this rally racing game, which now includes new additions, look no further than below.

The unlimited class of cars is a group of hard-to-drive cars. It has to do with cars that feel a little complicated to control due to rather lackluster handling. The car with the best handling of the group is the Jimco Unlimited Class I.

The car has performance rated with an A while its handling is rated B. Both are not too biased in one direction which is the problem with other cars in the unlimited category which helps the car feel as the best of the group. .

GAME VIDEO OF THE DAY

They say if it ain’t broke don’t fix it and that’s certainly the case with the base version of the Ariel Nomad. The car belongs to the super lite category and is the first car available to the player in this category.

Despite its B performance rating, it has good speed when driving the car and handles extremely well with an A-rated handling rating. If money is tight and you can’t afford a new car, stick with it to get through the tough time.

The cross-raid class is among the heaviest hitters in Dirt 5 because it has higher car weights than other classes. Despite that, it’s still a solid class to race with and the Volkswagen Race Touareg 3 is a good indication of that.

The Touareg is surprisingly fun to drive, despite its B grades in performance and handling. It’s especially nice to get ahead in a race and surprise everyone with a place on the top step of the podium.

Ford is a marque that has multiple cars in Dirt 5. The best of the Ford family in the game though should be this one of the modern rally car set.

RELATED: Things We Wish We’d Known Before We Started Dirt 5

The car boasts an S grade for performance with a B for handling. Despite that, it’s arguably the best car in the category and one that isn’t that expensive to buy either. The car handles smoothly on all terrains and should be the car of choice for modern rally racing.

If you don’t find the Fiesta to your liking, a great alternative would be the Citroën C3 R5. This modern French rally car gives the Fiesta a run for its money as the best car in its class in Dirt 5 with its balanced A-grade performance and handling stats.

Plus, a number of different CPUs you’re racing against use it to try and set you apart from the competition. Why not do the same to them and show them that you are the best driver and have fun while doing it.

Porsche is a brand known around the world and even ended up as one of the cars in Cyberpunk 2077. The first of many returning cars to appear on this list is the 80s rally class Prodrive Rally Raid, a category that has some solid cars to brag about. This Porsche is arguably the best of the bunch.

It has the same ratings as the Ford Fiesta, but it has that exotic old-school flair that will make you stand out. In addition, the car is fast and easy to handle, which is essential for winning races.

Another car from a fairly stacked category is the classic rally class Lancia Stratos. The car is relatively cheap to buy and should be bought right away if possible.

The Stratos has a B in handling but an S in performance, which will allow you to perform solid drifts. This car is good in gymkhana events because drifts are an easy way to get points and complete sponsor challenges.

On the surface, the discipline of ultra-cross seems the same as that of modern rallying. But you’ll quickly notice when riding them that they have noticeably more power. Fortunately, the game offers you the Peugeot 208 WRX because it is an excellent car to introduce you to this category.

It’s rated at a respectable 560bhp and its other stats, like its B performance and A handling, aren’t to be overlooked either. You can even use it for the ultra-cross class because the WRX can keep up with the best of them with ease.

A car that has no place in the pre-racer car class, purely because of its quality compared to its alternatives. This has to do with him having overpowered stats with his S and A performance in handling.

The best racing courses in Dirt 5

The other cars in the pre-racer category don’t hold a candle to the DBX because they can get close, but can’t get the cigar that the DBX got first. With balance like speed and handling in a category that lacks it, this Aston Martin will wipe the floor against the competition.

An instantly recognizable car, not just in the Dirt series, the Evo is part of the nostalgic 90s rally category with iconic rally cars. Cars that come close to dethroning the Evo as the best car in its class.

The car has the best handling stat in its class with an S handling with a solid A for its performance rating. It can get the job done in a recovery battle after tight corners and can easily recover from going off-road.

Suppose you prefer another retro rally car from the 90s, namely the Subaru Impreza S4, this car is in the game and like the Lancer it is one of the best cars in Dirt 5.

The Impreza’s performance and handling are reversed, favoring speed over handling. Although it doesn’t move like a bullet, it gives this classic Subaru the best performance of the ’90s rally group, making it a great choice for just about any racing situation.

Now here’s a car that isn’t quite as recognizable, but will be once you actually drive it. Don’t let the C handling rating fool you, this car handles very well and is easily the car to use for cross-raid racing.

It’s also the car used by Dirt 5’s main antagonist, Bruno Durand, who is the arrogant undefeated champ you have to take down. With such hype, it is better to fight fire with fire not only against him, but also against the competition.

The rally GT category is filled with cars not normally associated with rallycross racing, transformed into rallycross machines. One of the best in this category would have to be the Lotus Exige.

With an A grade in performance and handling, it offers the perfect balance of good speed and smooth handling that other cars in this class are somewhat lacking. It may be a little pricey to buy, but it’s definitely worth it.

For a car even more surprising than a Lotus to be good at rallying, look no further than the Duke Coupe. This vehicle, which was added as part of Dirt 5’s Uproar pack, looks like a car from the 1930s that has decided to try its hand at off-road racing.

The Duke Coupe is one of the fastest cars in the GT rally group as it has a strong S-rating in terms of performance. Also boasting an A in its handling stat, this vintage-looking car makes a strong case for being the benchmark in its respective class.

Arguably the best car in the game from the ultra cross category is this Subaru. The car is fast with an A performance rating but has S handling to balance it out, so the car doesn’t take too much control over the driver.

It’s no surprise that your character’s mentor, AJ, uses this car as a reference. This is the car that made him so famous in the game for consistently winning and so will you with this beast.

What only pro gamers know you can do in Dirt 5

Joseph “Joe” Metz has been a lifelong gamer and lover of video games his entire life and wants to share that love with others. He holds a bachelor’s degree in journalism from Rowan University in New Jersey. Has had Asperger’s Syndrome since he was a child and considers it a part of himself.