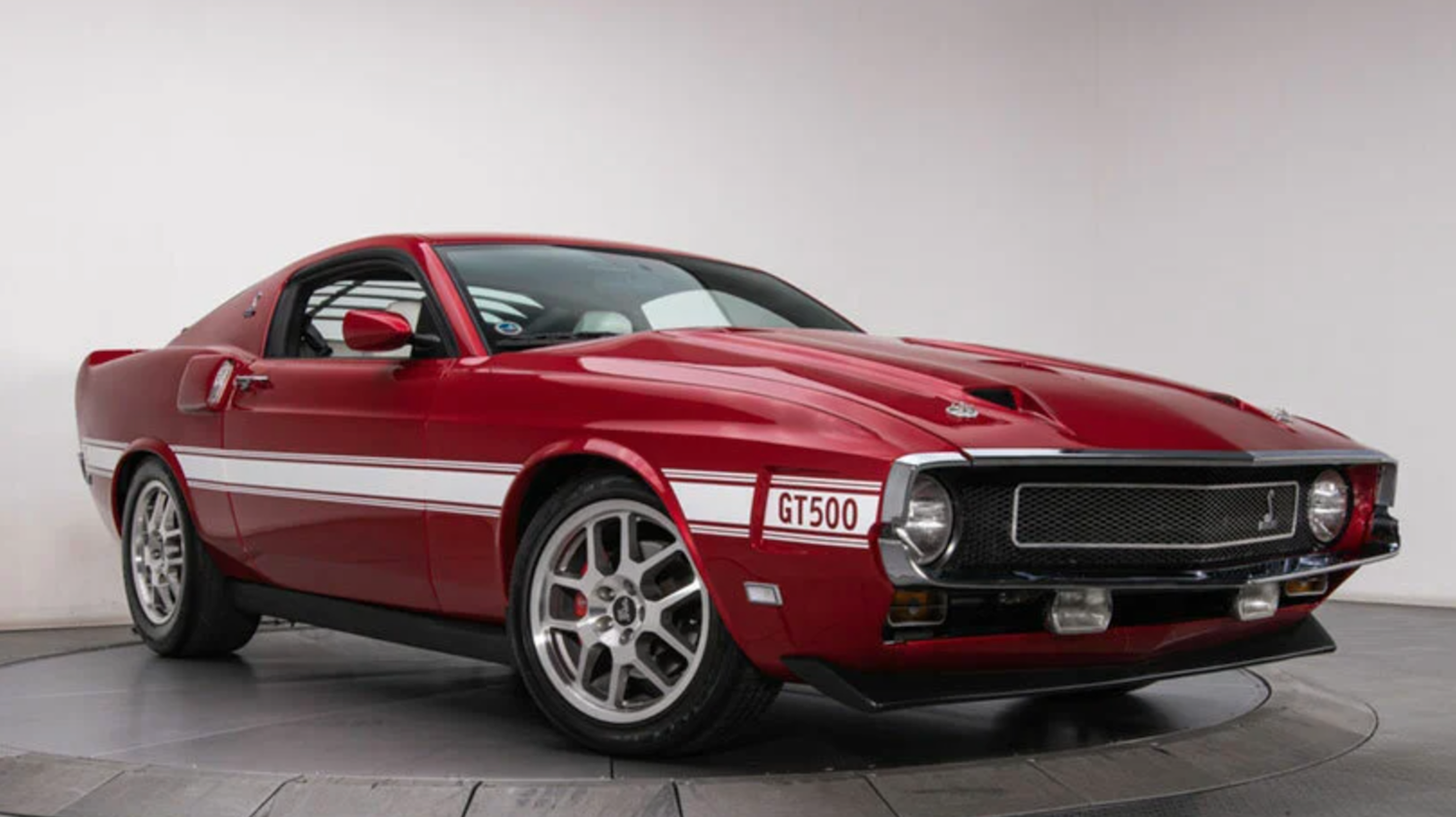 Yes, these things happen. Taking newer cars and adapting older body parts to make them look like vintage vehicles. Some end up looking great. But others… You decide whether this mash-up of 1969 Shelby Mustang body parts glued to a 2008 Mustang was a success or a dismal failure.

Who created this 1969 Shelby Mustang mashup?

Retrobuilt Motors professionally created this GT500 tribute. It’s what the company calls a reverse restomod. After removing the entire lower body, he fabricated a new one from the 1969 Mustang sheet metal, for a Shelby GT500 lookalike.

With the price of beautiful 1969 Shelby GT500 Mustangs over $100,000, this one came in at under $65,000 at a recent eBay auction. We know what the downsides of a mashup like this are. Positives include reliability, ease of maintenance, and parts that aren’t as expensive as diamonds.

What other mods were in the 1969 Shelby Mustang mashup?

And Retrobuilt didn’t leave it stock below. For stiffness, he added a new tubular K member. The suspension received both a heavy-duty stabilizer bar, panhard bar and Roush billet A-arms. Roush parts modify the geometry to improve handling.

The engine was not spared. A modular 4.6 liter engine has been modified to increase the 300 hp of the original engine. A Comp Cams Thumpr cam, cold air intake and H-pipe combined with Roush mufflers get air in and out quickly. A TR365 Tremec five-speed manual spins the rear 8.8 inches. The rear of the positraction uses a 3.73 ratio.

Retrobuilt has made other Mustang mashups.

This isn’t the first rodeo for Retrobuilt and a 2008 Mustang mashup. It’s created many famous Mustangs imagined around a 2008 build. In 2019, it made a Bullitt version of the 1968 Highland Green movie icon. And the project began as one of Ford’s Bullitt-inspired 2008 Mustangs.

The project began with the removal of all body panels except the roof, similar to the GT500. The fiberglass panels were splattered from a real 1968 Mustang. These panels were then cut to conform to the shorter wheelbase of the 2008 Mustang. Items such as the door handles, bumpers and the mirrors were all taken from original cars or were reproductions.

As with the GT500, the level of build quality is on par with custom coachbuilders. These are not kit cars. And with Retrobuilt specializing in Mustangs, and having molds to possibly make more, there could be more mashups like these in the future.

As the Mustang is authentically American, so is a newer vehicle and giving it a retro look. So, is it a success or a failure in your eyes?

Top 10 most expensive motorcycles in the world