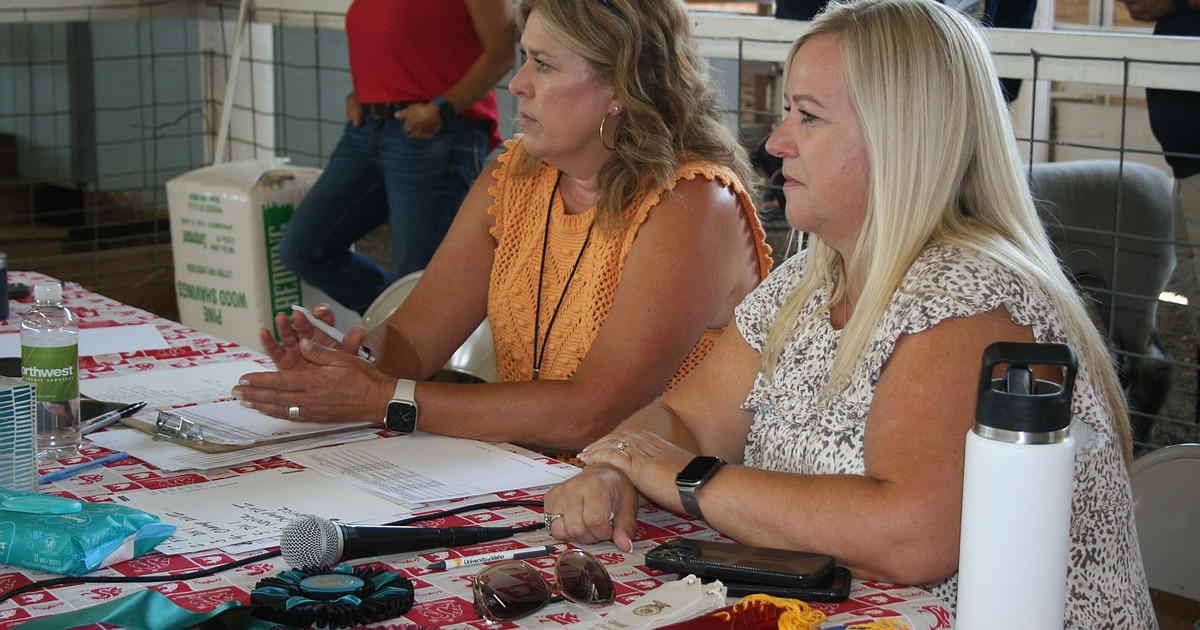 MOSES LAKE — Sounds – easy. Participants in the cattle competition at the Grant County Fair enter the arena, they are ticked off and at the end the correct ribbon goes to the correct person. A hungry spectator walks to a food stand run by a local nonprofit and places an order, and the right order arrives.

From ribbons to Spaceburgers, everything is going pretty well.

It’s the people at the folding table next to the show ring, and the teams that are kind of out of sight, manning the food stalls and the show buildings, that make it feel like it’s ‘is easy.

Most of them are volunteers. Fairground manager Jim McKiernan estimated that around 250 volunteers were needed to help the fair run smoothly.

The organizations that run the fundraising food stalls are finding their own volunteers, and for some it has been a struggle.

Volunteers overseeing the competitions and running the food stalls said it offered its own rewards.

Carol Garneau and her husband Mike have been volunteers for the cattle show for about 30 years. The young people who exhibited at the start of the Garneaus now have children, she says.

Garneau was in charge of the paperwork Wednesday afternoon, checking on exhibitors as they led their steers into the ring. Jessica Chamberlain was doing the same for the pig competitors.

“I make sure everyone in their class has all checked in and is ready to go,” Chamberlain said. “Then once the class has their rankings, I just (record) their rankings so they’re in the sales guide. And then make sure they get their ribbons and they’re lined up.

Tawna Sandman and Jana Raymond were doing the same job for the lamb fitting and showing competition on Thursday morning. Sandman has been superintendent of the lamb parlor for eight years, she said, and Raymond has been assisting her for three years.

Both are veterans of the show ring, and their children have shown animals as well. Their children are grown, but both women said they like to stay involved.

It’s a chance to support youth programs, a way to give back to 4-H and the FFA and the community at large, Raymond said.

Maintaining volunteerism was one of the reasons Juli Rasmussen worked at the Moses Lake Lions Food Stand.

“The problem with service clubs like this is that they were started so many years ago, and if people my age and younger don’t get more involved, these clubs will die out. “, Rasmussen said.

“And that’s just tradition,” she added. “It’s part of the fair that you come, have fun and do your part. And enjoy the whole community there.

Rasmussen was part of the team that prepared the batter for lion ears at the Lions stand, along with Robin and Mary Hickok, who are food stand veterans.

Lions support vision and hearing programs, and those programs cost money, Hickok said. The only way to pay for them is through fundraisers, and the food stand is one of the largest for the Moses Lake Lions.

“And then you can eat the food,” Rasmussen said. “Let’s not forget that – I have all the elephant ears I can eat.”

McKiernan said it’s been a little harder to recruit volunteers over the years, and fair staff have had to hire people to do some of the things volunteers used to do. The office staff who keep track of entries are paid, and Sandman and Garneau praised them and the fair staff for their work.

“It really helps to work with such a great group of people,” Sandman said. “It’s a pleasure to come and help when you have such a good crew.”

“It’s getting harder than before,” McMains said.

So, this year, members of the club hired participants in some youth organizations, and the money goes to the activities of the organization, she said.

Carol Garneau said she and her husband plan to continue volunteering because it’s fun.

“We get to know the kids,” she said. “It’s almost an annual meeting for a lot of us elders.”

Cheryl Schweizer can be reached at [email protected]

Sharing the love of wheels, car enthusiasts show off their treasures