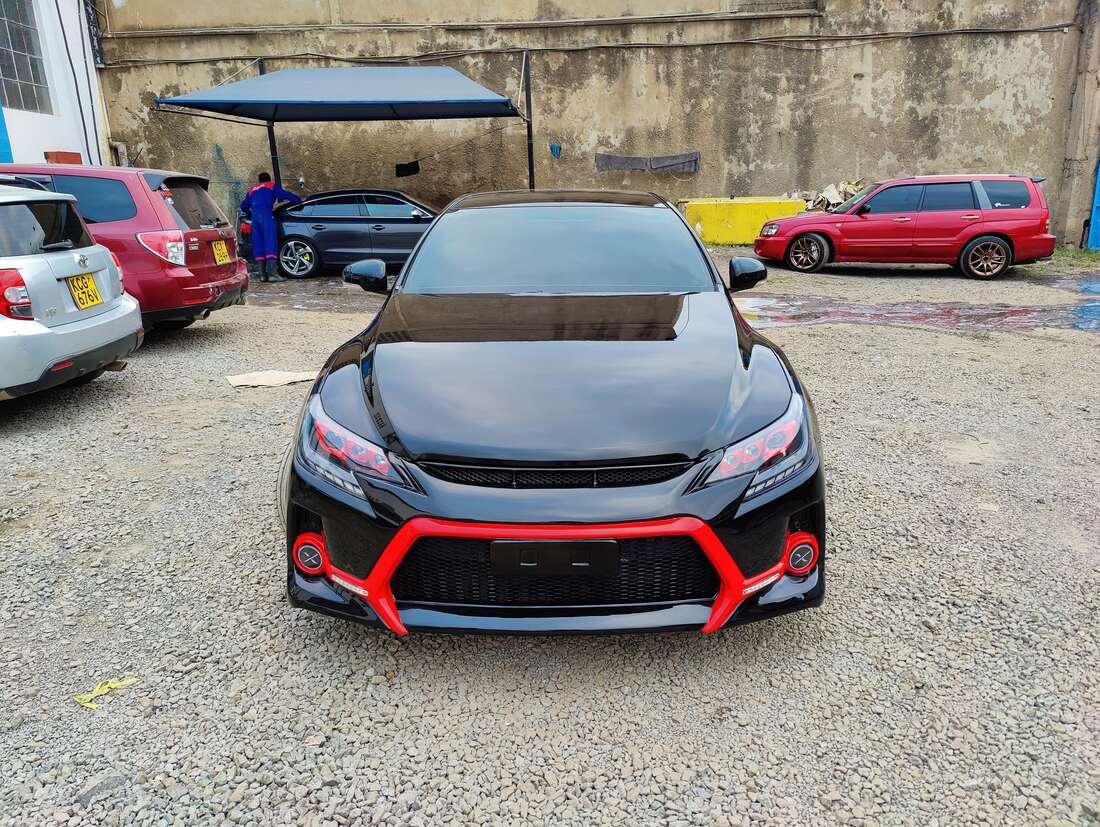 When Aloyce Omondi, the owner of the Nairobi Pimp Auto Garage moved to the city in 2007, he only came to train as a mechanic, by apprenticeship. Knowing too well that the city was flooding with mechanics day after day, he had to be unique in his art.

He had an innate art of drawing, and now he had become an automobile enthusiast.

The sporty, flashy cars and the way they raced through the streets from the movies he was watching, fascinated him so much that he vowed to do the same one day.

He trained as a mechanic until he was confident he could handle any vehicle on his own. Added to the inherent passion, he realized, the mixture works like magic. However, it was not until his then employer entrusted him with procuring “Brainchild”, the very first modified matatu to take the Buruburu road from Nairobi, that he realized that he was was in an unexplored area.

With over a decade of experience modifying cars, he says, the business has grown, thanks to Kenyans with Toyota Premios but wanting a Lexus design. Or those who want their Honda Civic to look like a Lamborghini, or a Toyota Wish to have a Subaru Impreza shape.

“These motorists are looking for car models that they can’t have but want to feel like they own one, that’s where I come in handy,” says Mr. Omondi, now known as “Engineer Omondi” in garage circles.

Whether they are ahead of the manufacturers, car owners have modified different parts of their vehicles for aesthetic reasons or to improve performance.

The auto modification business is so good that Suleiman Mwakuwanda, owner of New Digital Cushion Makers in Majengo, Mombasa, says it will be difficult for him to look for a job in another field.

He specializes in interior design and has worked in the industry for 11 years now.

The majority of its clients are between 30 and 50 years old. For the older generation, Suleiman says, they generally don’t need a lot of work on their vehicles.

To embellish the interior of a vehicle on its own, some of its customers may dispense with 200,000 Sh.

“It all depends on the type of modification. Some people want a very sophisticated design that increases the price, while others who just want it to be simple can pay 100,000 shillings, ”the 32-year-old explains.

The price largely depends on the quality of the material used, but it also helps mechanics to retain and attract new customers.

For Mr. Suleiman, he says, it is creativity and precision that sets him apart.

“As this is a creative sector that has no particular formula, I strive to create my unique design,” he says.

In a month, it can work on more than 10 vehicles. So what are its customers asking for?

“For some, re-carpeting, putting rubber, checkered plates, leather for the seats, rough and hard for the vehicle roof and mirrors,” he says, adding that a customer may also want a system. elaborate music and a TV.

Mr Omondi says that over the years more and more garages are “doing the same”. To stay ahead of the race, he does not import auto parts for the remodel because “it will make my services expensive.”

“I don’t import the modified parts. We shape them here. The customer only sends us a photo of what they want, we agree on the delivery time and get the job done, ”he said, pointing to a plasticine.

He uses fiberglass, hair straighteners, plasticine and soldering machines, and paints at different stages of the redesign.

Thanks to his prowess, he boasts of a national clientele.

“Most of them are references,” he says, adding that his garage is mostly used by car owners who are mostly between 30 and 40 years old.

According to Mr. Omondi, a complete overhaul of a car takes about two weeks. The demand of each customer is unique and sometimes even crazy.

“As crazy as wanting a sunroof for a vehicle that isn’t allowed to have one,” he says.

However, it is these crazy changes that worry insurers. They argue that the changes make it difficult to determine the risk profile of vehicles and therefore almost impossible to choose the right level of premiums.

While this is likely to hurt the garage business, Mr. Omondi is convinced that his customers’ tastes cannot be tamed by increasing premiums.

For Arun Kumar, an Information Technology and Electrical graduate, he says he did a lot of research before quitting his previous job and settling on car light modification as a profession.

Passionate about games, the art of car modification was first a hobby before marketing it. He looked at the modified car lights in games and translated them to the real world.

He has been running Modz & Lights Car Lighting Solutions for five years now.

Based in Ruiru, Kiambu, he says his business mainly attracts car owners in their 30s and 40s.

“They mostly ask for an upgrade when they can’t see at night,” he says.

“Sometimes, however, they just ask for a beauty adjustment.”

With the recommended warm white light having a temperature of 5500 K, the increased brightness can endanger other motorists, especially at night. The higher the temperature, the lower the visibility, and vice versa.

Traffic laws prohibit the use of overly bright headlights. But Mr. Kumar argues that with new technology, he can adjust the lights, whether to improve visibility or for beautification, without hindering other motorists.

LED lights, he says, have the advantage of reducing glare to zero. The inclusion of headlamps in the lighting system results in greater concentration in the center of the road.

“Headlamps also have the advantage of a crisp and clear vision board, which then allows an oncoming motorist a search space,” he says.

Then there are those Kenyans who love classics and vintages, but take great pleasure in customizing them to suit modern trends – or something akin to how it left the manufacturer in the years. 1930.

Their satisfaction is to see their engines run and operate like modern models.

It was out of love for classics and the scarcity of finding spare parts that Benjamin Ngige decided to own a “classic restoration” garage to help Mercedes-Benz enthusiasts restore their old models.

It is not all about modification, but rather restoration.

For the past seven years, Mr. Ngige has operated @GermantouchKE, a classic Mercedes-Benz food court, and he has worked on over 50 vintage cars.