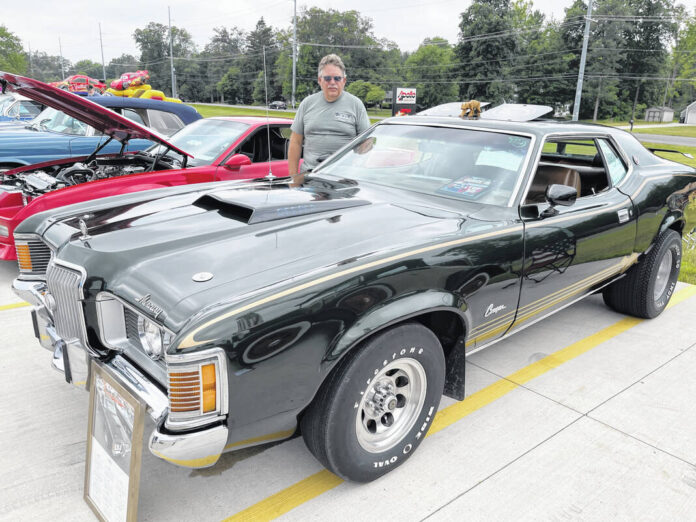 WAPAKONETA — Charles Drexler was a student at the Apollo Career Center in 1981 when he bought his first car, a 1972 Mercury Cougar.

He still has the car today, and it’s in better than “fairly good” condition. It was an eye catcher at the Charity Car Show held earlier this year.

“I put a lot of work into it,” Drexler said. “Occasionally I take it out in the car, but mostly I only take it to car shows now.”

The Cougar was marketed in 1972 as “North America’s most important cat”. It featured a 351 Cleveland engine, nicknamed the Cleveland after Ford’s Number 2 Engine Plant, where production of the engine had begun two years earlier.

Ford and Mercury made extensive use of the 351 engine. It was unveiled at a time when the muscle car movement had reached its peak. Imports were taking a bigger share of the market, with the biggest new growth in the automotive industry being in subcompacts.

The Cougar, however, retained an important role in Mercury’s image.

It was unveiled in 1967 with an emphasis on both luxury and performance. That year, it won Motor Trend’s prestigious Car of the Year award. The 1970s and 1980s saw the Cougar continue its luxury sports car image by playing on “The Sign of the Cat” theme.

The Cougar had a production run of 34 years from 1967 to 1997 and from 1999 to 2002. During that time, it was a cat with many lives, sold as a convertible, four-door sedan, station wagon and hatchback. It is, however, most often associated with the two-door coupe.

GET YOUR FEATURED CAR

The Lima News publishes photographs of vintage cars 20 years or older for free in Real Wheels. It’s easy to feature your car:

• To understand: Photograph of your car; car year, make and model; how many years you have owned the vehicle; car history; best car memory; your name, address and telephone number (the telephone number will not be published).

Check out the cars we’ve featured and discuss your memories on the Real Wheels page at LimaOhio.com/tag/realwheels.

A traditional taste of Oman at Shangri-La Al Husn