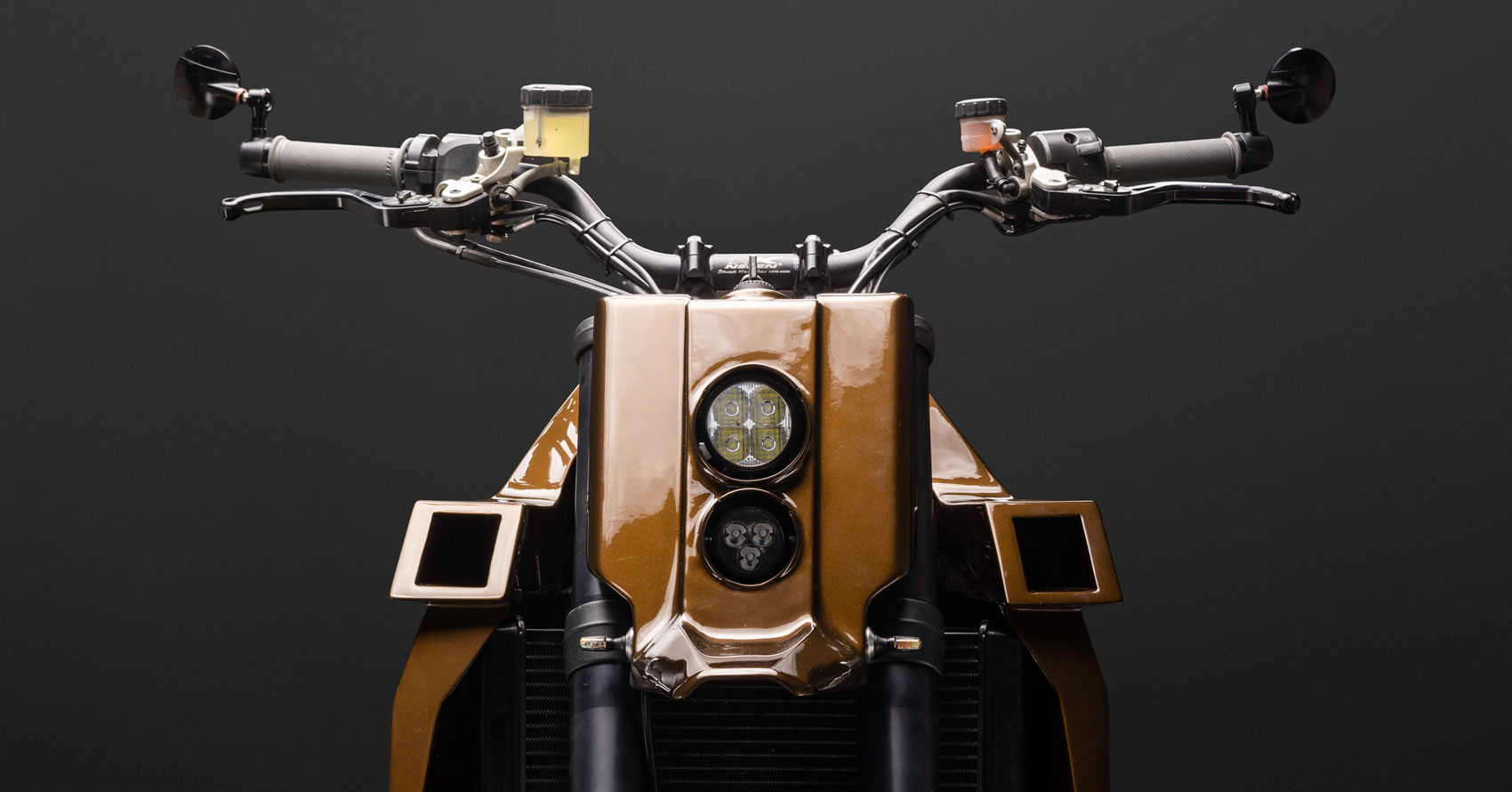 This week’s offer includes two very different Honda CB750 customs from two different parts of the world. But first, we’re looking at a KTM SuperDuke 990 by Outsiders Motorcycles, and a rare ISDT Triumph. 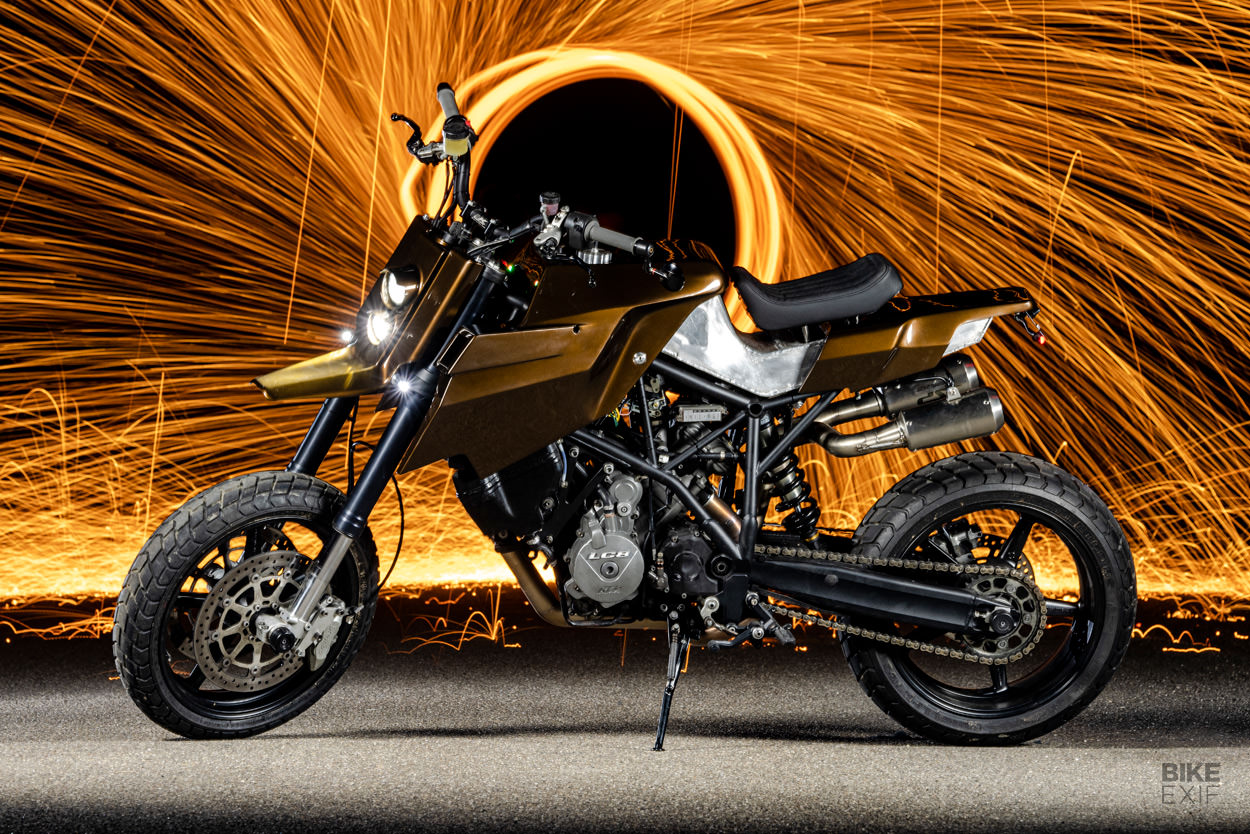 KTM Super Duke 990 by Outsiders Motorcycles Judging by this radical KTM Super Duke, “Outsiders” is as punchy as the custom boutique names. Builder BertJan Blok has built his fair share of traditional customs, but he’s also known for thinking outside the box.

BertJan’s customer on this project spotted such a bike (a hot pink Husqvarna Vitpilen 701) and wanted something similar. But it is well over two meters tall, so the proportions of the 701 would have been very far off. A 2006 model KTM Super Duke 990 was chosen as the donor instead, and soon the whole concept morphed into its own animal. 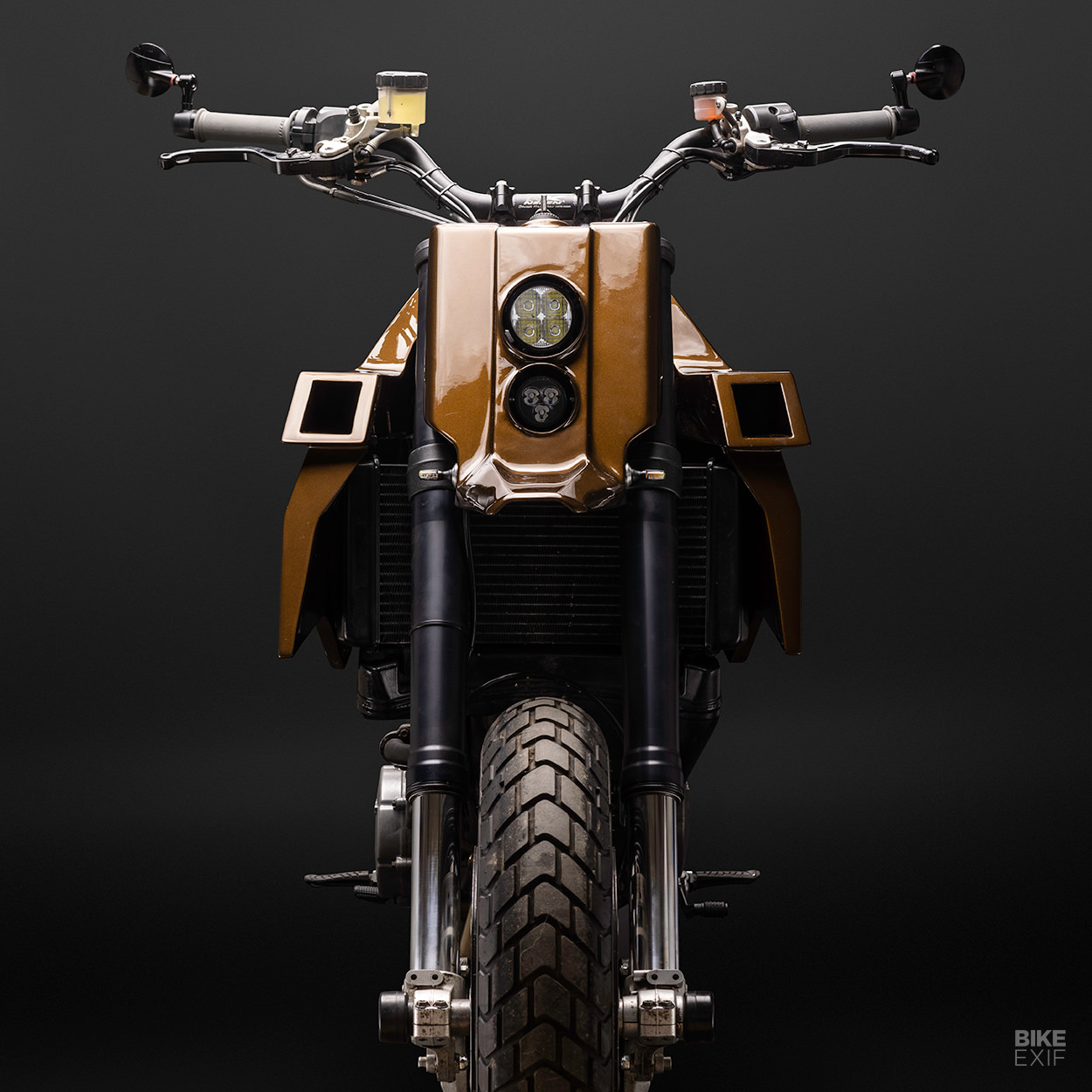 The plastics from the 990s were cracked and black, so BertJan threw them straight into the trash. Then he ripped off the stock speedo to see if the bike would still work without it, and started chopping up the design. “I like to keep the designs raw and raw,” he says, “because it leaves room for improvements and ideas along the way, as long as the big picture is clear.”

The KTM now wears a full set of hand-crafted aluminum bodies, with a single fuel cell serving as the basis for everything. BertJan shaped the fuel cell by first simulating it with cardboard, then switching to aluminum. The tank mounts to the stock frame in the front and sits on a custom chromoly subframe in the rear. 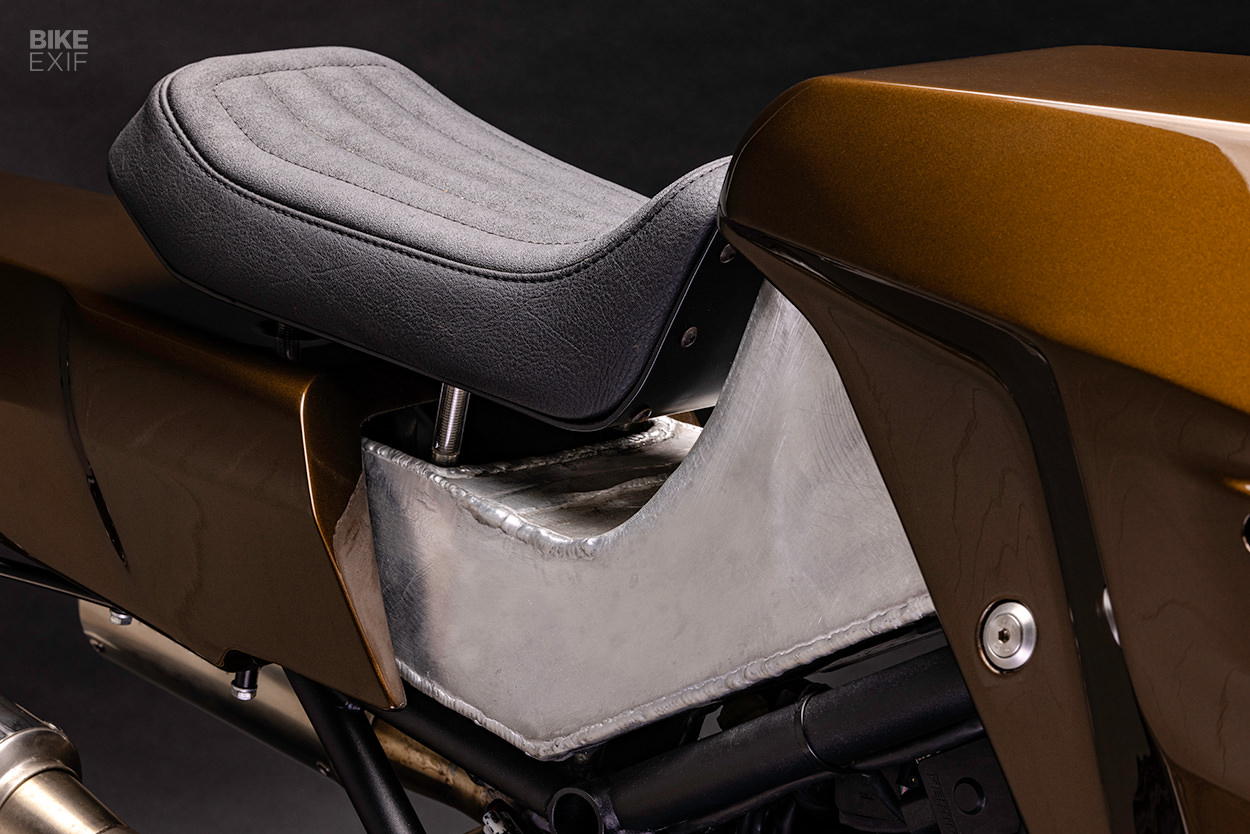 With the main section complete, BertJan fabricated a tank cover, tail section and pointed headlight nacelle. All contain some DNA from the original bike, but they are not true copies. The tank cover is also quick to remove, as it provides access to the air filter, battery and major electronics.

Getting the right seat was a challenge, given the client’s frame, so BertJan opted for a ‘floating’ design. The saddle is built on a 10 mm thick aluminum plate, in order to be able to carry the pilot on its four fixing points. The footpegs have also been raised lower, to optimize the rider’s triangle. 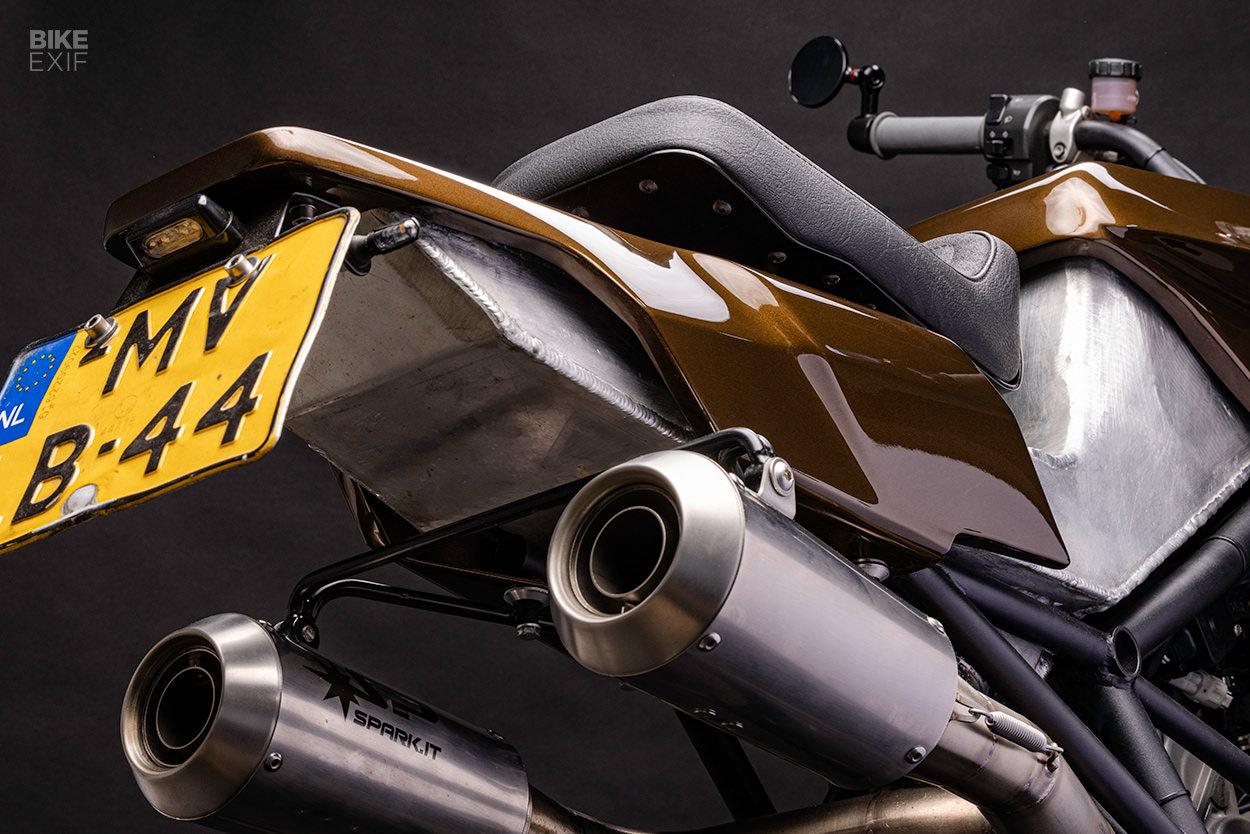 BertJan installed a KTM 990 Adventure front end and a Hyperpro rear shock, both of which help the Super Duke stand taller. He also built the exhaust system out of stainless steel and machined a bunch of smaller parts to help the Super Duke wheels work with the Adventure forks. Neken handlebars and risers and a Motogadget speedo round out the spec.

As the project neared completion, BertJan assembled the bike, took a photo, and used Photoshop to experiment with the liveries. In the end, a simple root beer finish on raw aluminum did the trick. 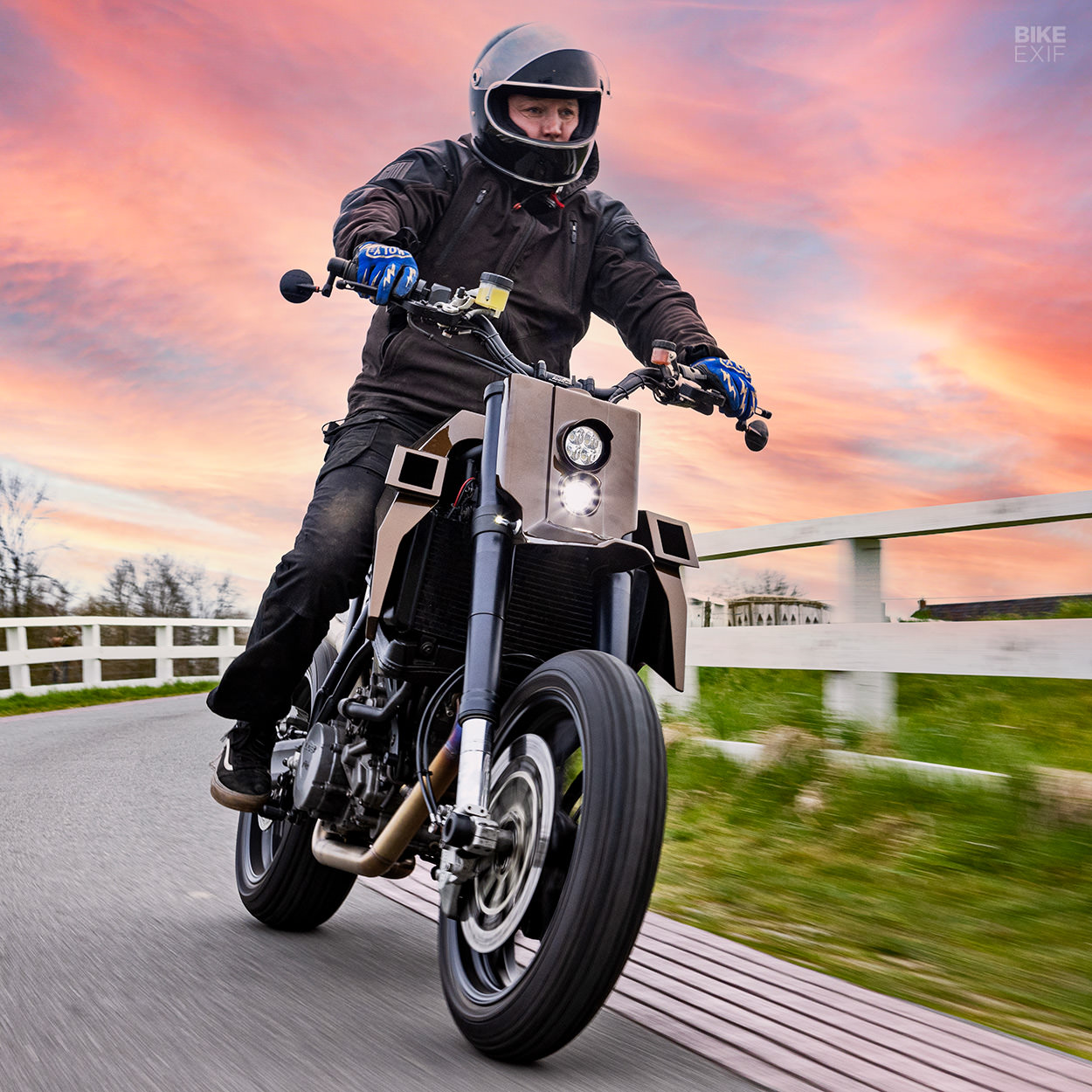 If you want to know if this KTM looks as flashy in person as it does in these photos, it will be on display at the Bike Shed Show in London later this week. [Outsiders Motorcycles | Images by Winchester Creatives and Lynn Hofenk] 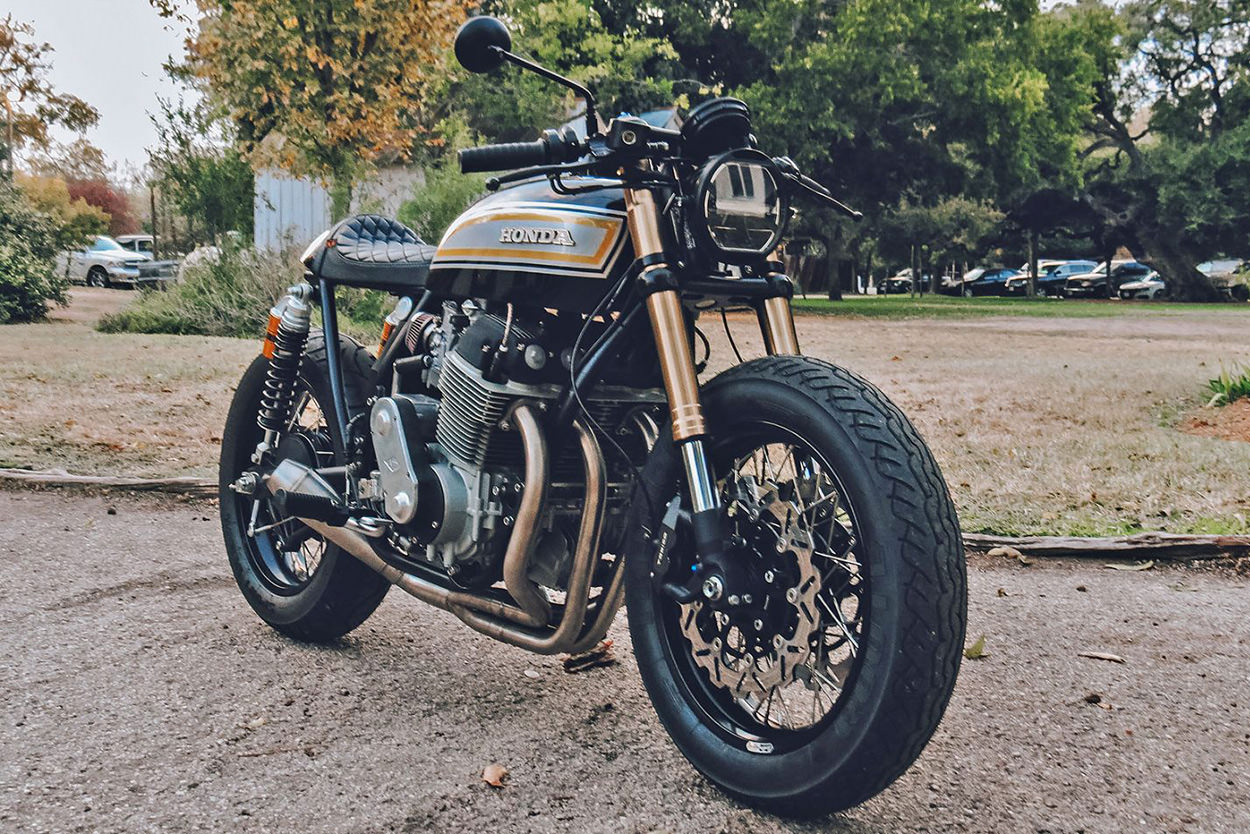 Honda CB750 by Tyson Carver Texas-based Tyson Carver has been customizing bikes in his home workshop for over a decade now. But this 1974 Honda CB750 is the first build he’s done for a real customer – and we’re pretty sure it won’t be the last.

The brief was for a classic cafe racer with a no-holds-barred approach. So Tyson worked with Honda’s Cycle X “hot rod” specialists to get the motor up and running. It now runs a 915cc big-bore kit, a long list of in-house mods, a Mikuni RS 34mm carb kit and a custom four-into-one exhaust system. 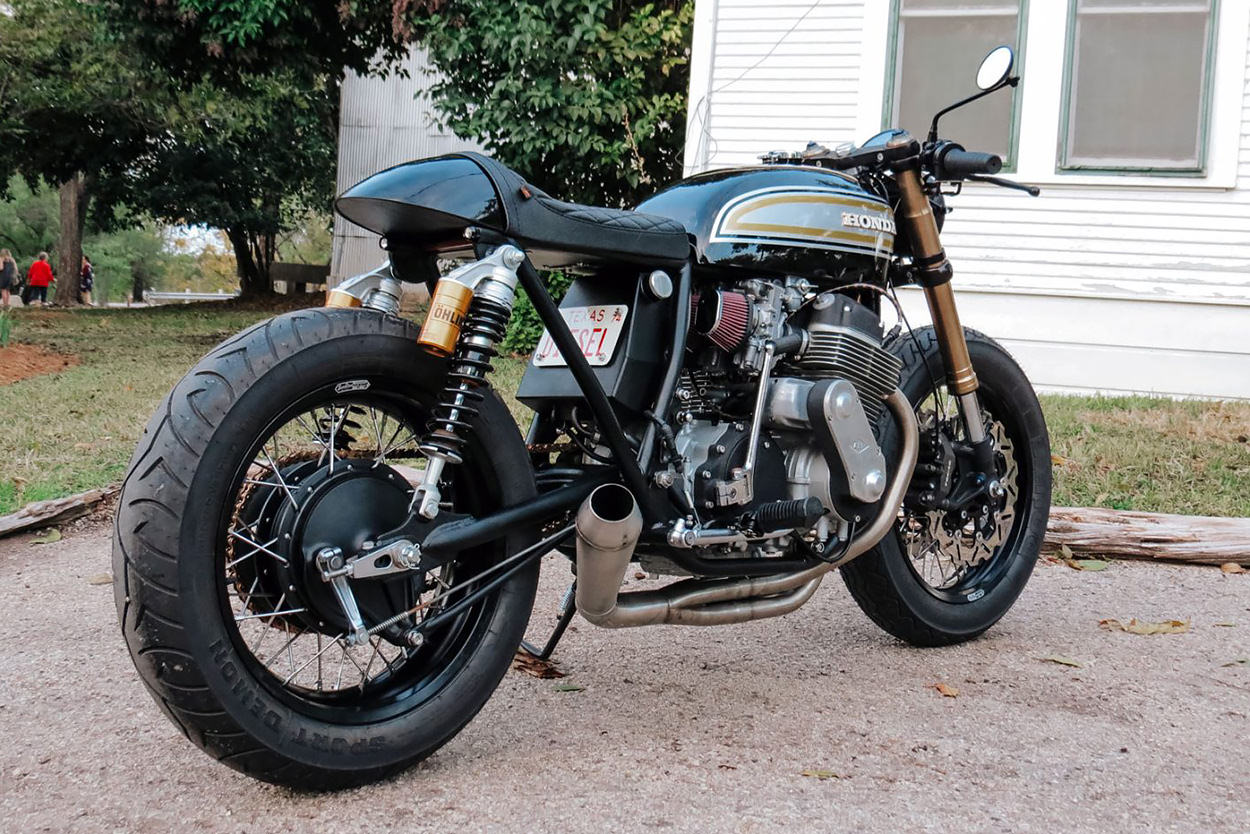 Keen eyes will spot a classic ARD magneto box on the side of the engine, but that’s a red herring. The ARD magneto didn’t work, so Tyson pulled his guts out and hid a Dyna electronic ignition and a set of small coils inside.

The chassis is quite special too. This is an old drag racing bike, built by Bill Benton at BentON Racing in Georgia. “Because it started out as a race frame and I had found the ARD magneto ignition, we wanted to make it kind of a dormant cafe racer and a homage to old Russ Collins type race bikes,” says Tyson . 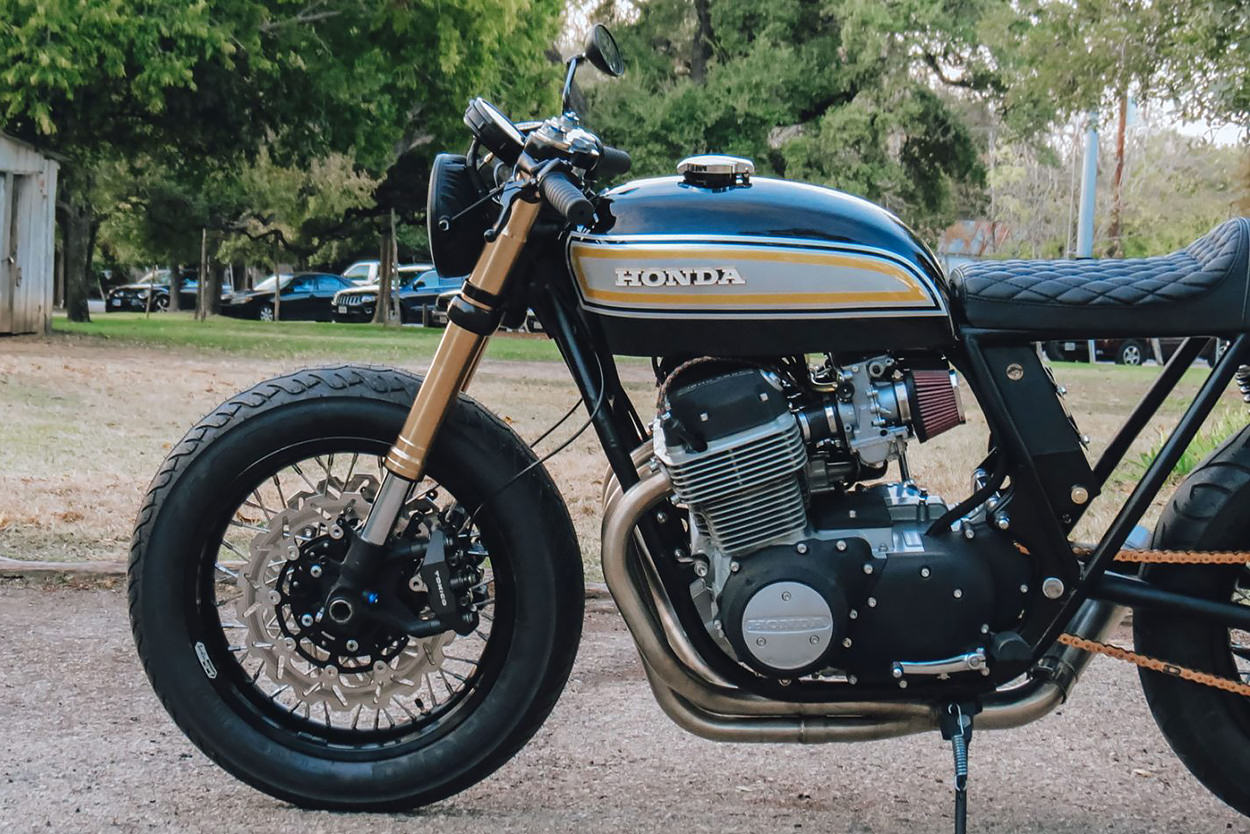 Tyson made some tweaks to make the frame usable on the street, then installed a Suzuki GSX-R front end and Öhlins shocks that are hooked up to a Honda CB550 swingarm. The rear drum brake has been rebuilt, while the front wheel is stopped by the Suzuki’s Tokico calipers.

Tyson also added a cafe racer seat from Tuffside, Messner Moto clips, Rebel Moto switches, a Speedhut speedo and an LED headlight. The bike has also been rewired with Motogadget components and upgraded with a Cognito Moto oil tank. 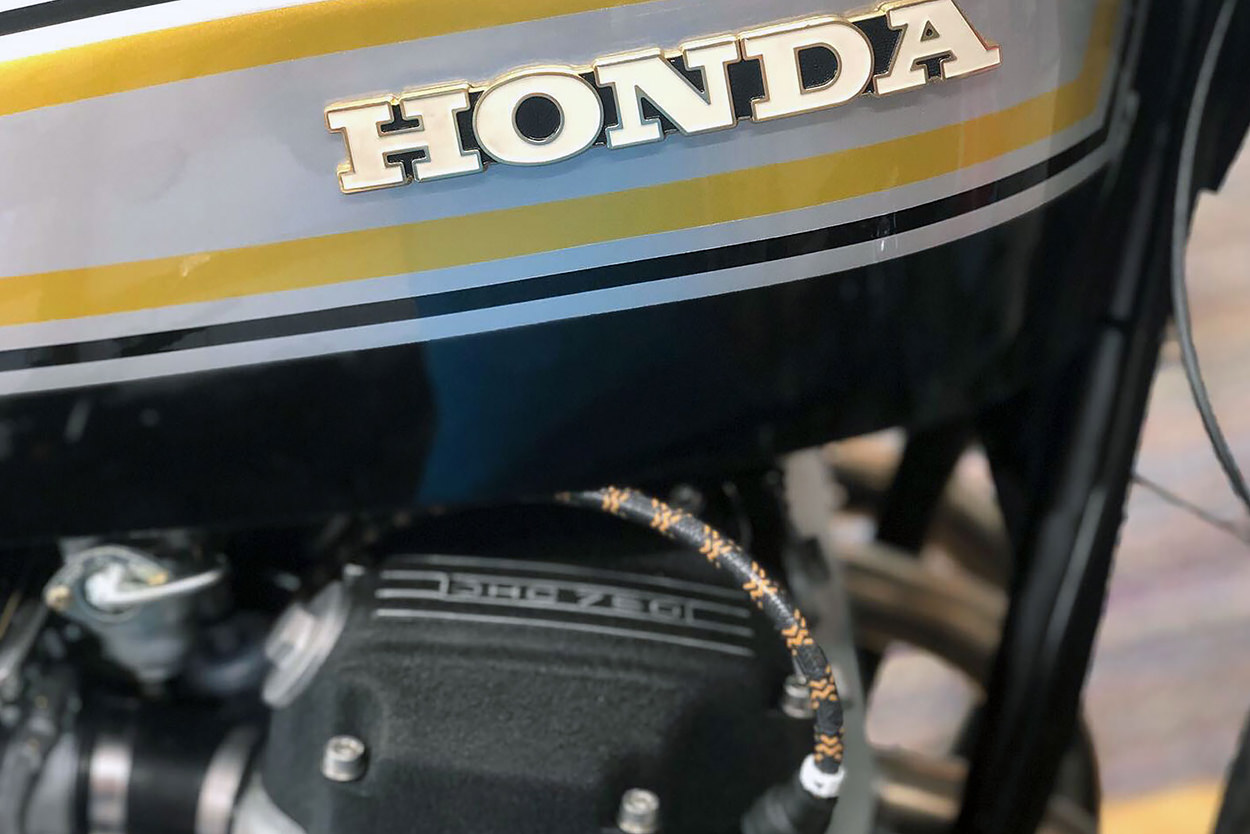 Top marks to Tyson for the classic color scheme, which definitely adds to this Honda’s vintage sleeper personality. And he really is a sleeper, according to Tyson.

“The engine will scare you straight away,” he says. “It turns like an F1 car.” [Via] 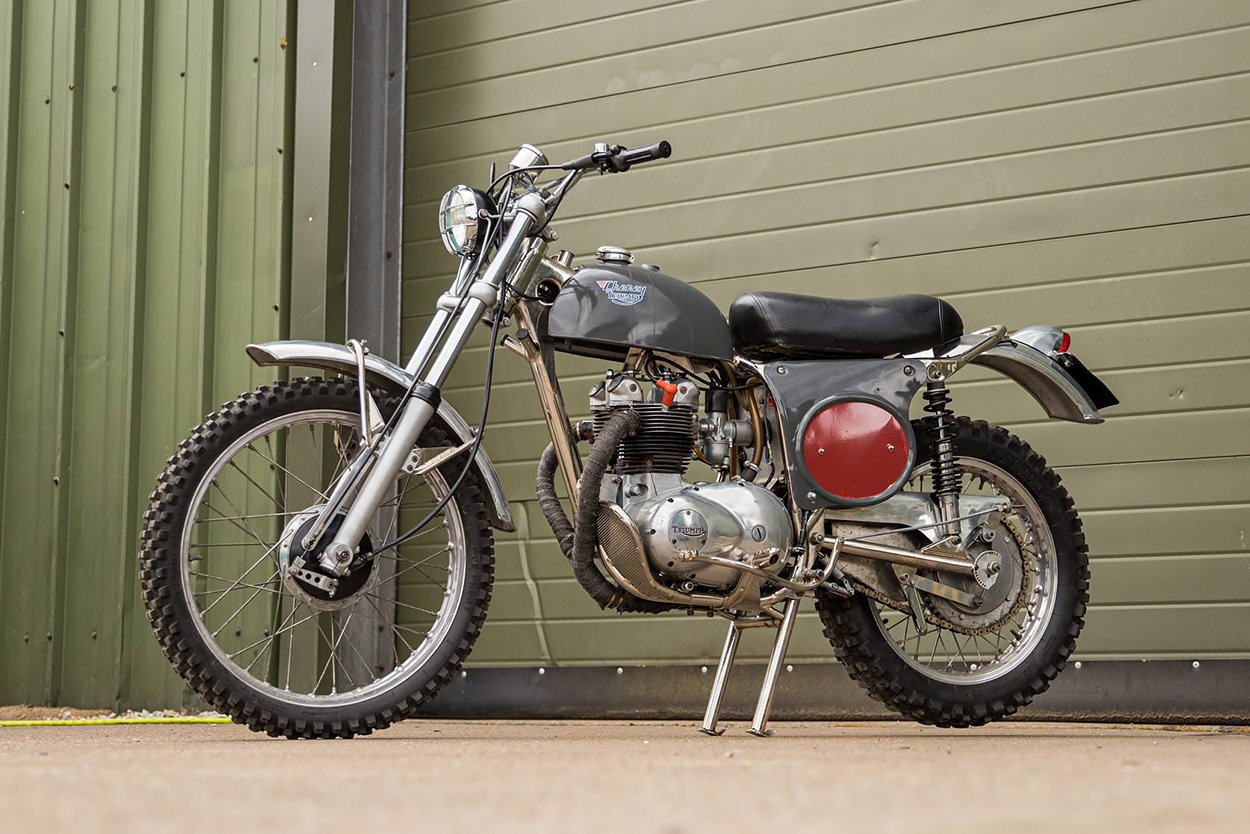 Sold: Cheney Triumph ISDT As far as vintage enduro racing Triumphs go, the Rickman Metisse seems to have the most airtime. But there were other sporting icons at the time building high-end race bikes who also deserved the limelight, like Eric Cheney.

Born in 1924 in England, Eric started racing motorcycles after World War II. But then he contracted an illness in Algeria that ended his racing career, so he became a frame builder, building some of the best race bikes of the 1960s. 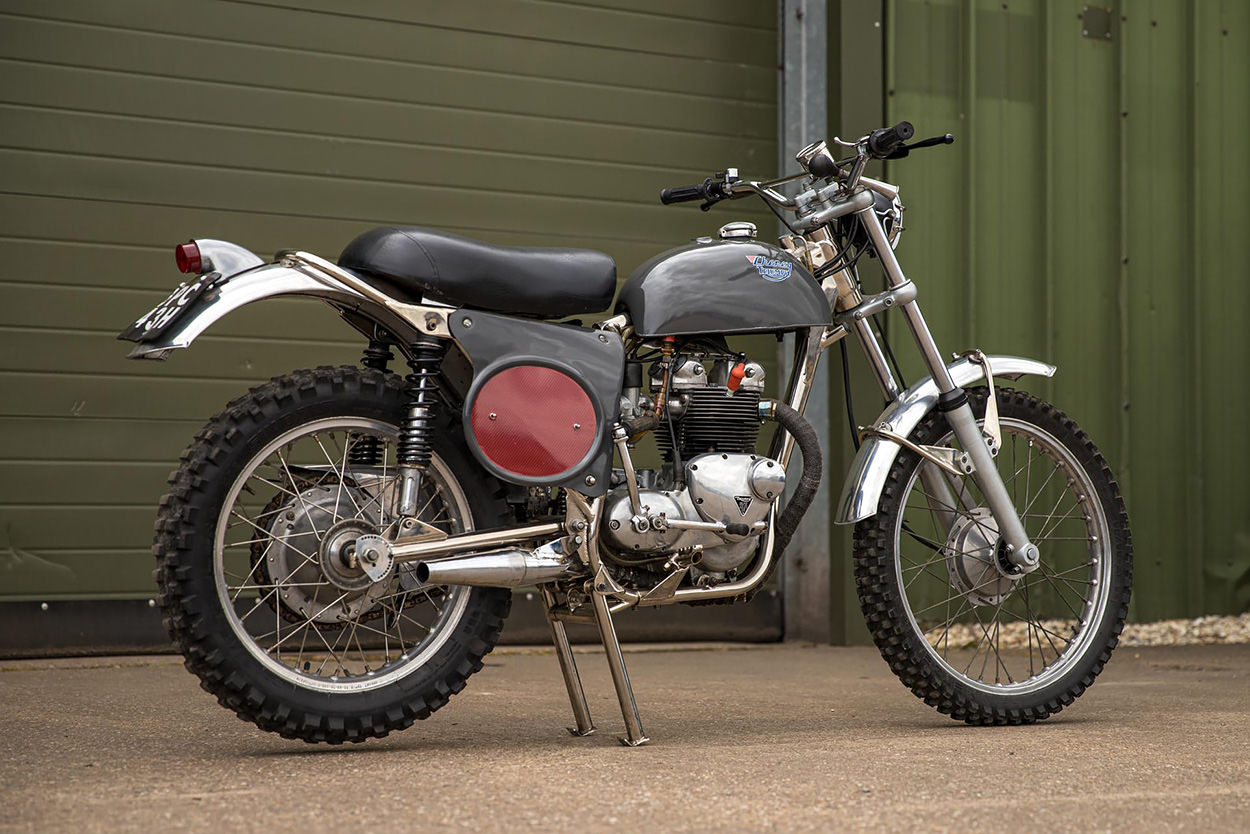 Eric passed away in 2001, but Cheney Racing still exists—and you can still buy frames and parts from them. This particular bike is notable because it’s not from the 1960s, nor is it entirely new. It was actually built in 1995 by Eric himself and has just sold on Collecting Cars for the bargain price of £5,600. [just under $7,000]. 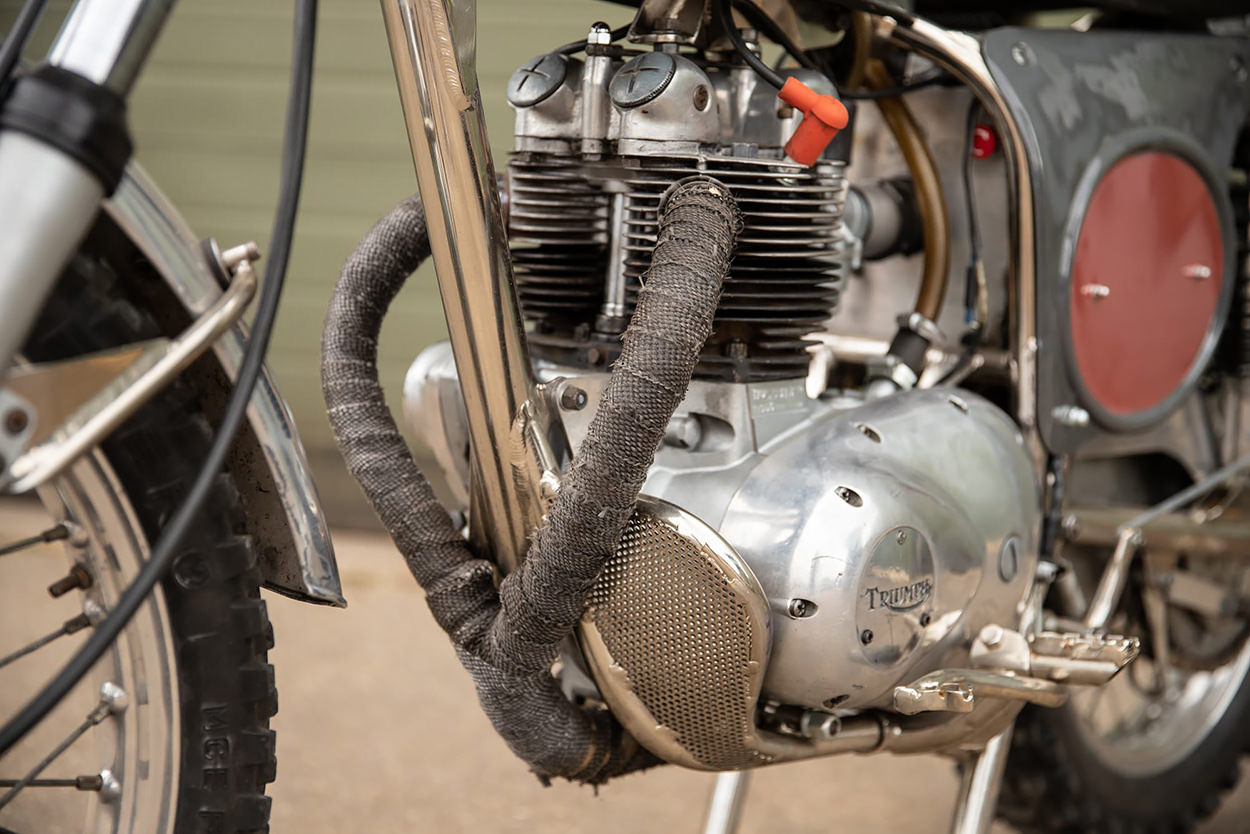 Eric built the bike in the same style as the International Six Day Trial bikes he created in the ’60s, with a hand-built, nickel-plated frame. The engine comes from a 1970 Triumph Daytona; a 500 cc parallel twin with a four-speed transmission.

The forks are Ceriani units, the shocks are from Koni, and the wheels are Akront rims on Grimeca hubs. It also includes an alloy fuel tank, fiberglass side panels and chrome fenders. 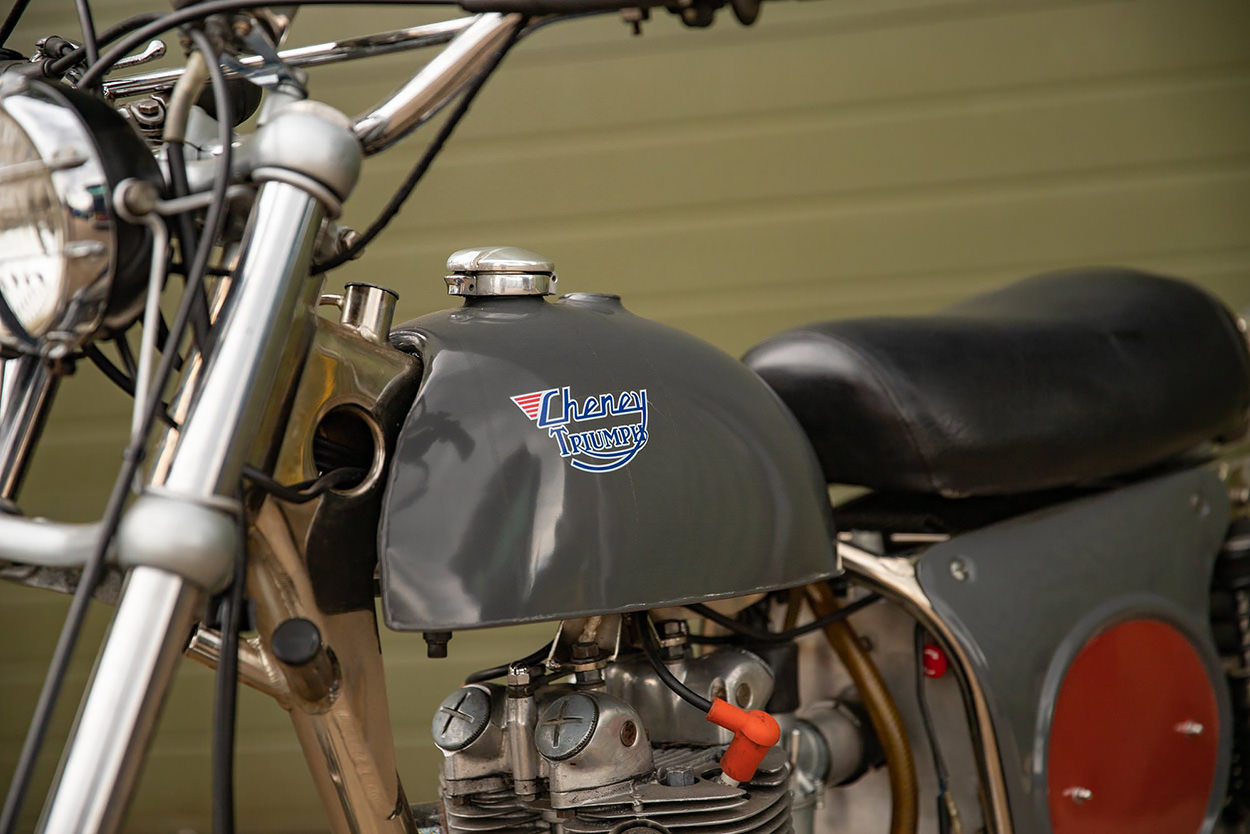 Even though it isn’t technically from the 60s, it ticks all the right boxes as a charming “vintage” enduro bike. It’s as cute as a button, and we’re sad we weren’t the ones who bought it. [Via] 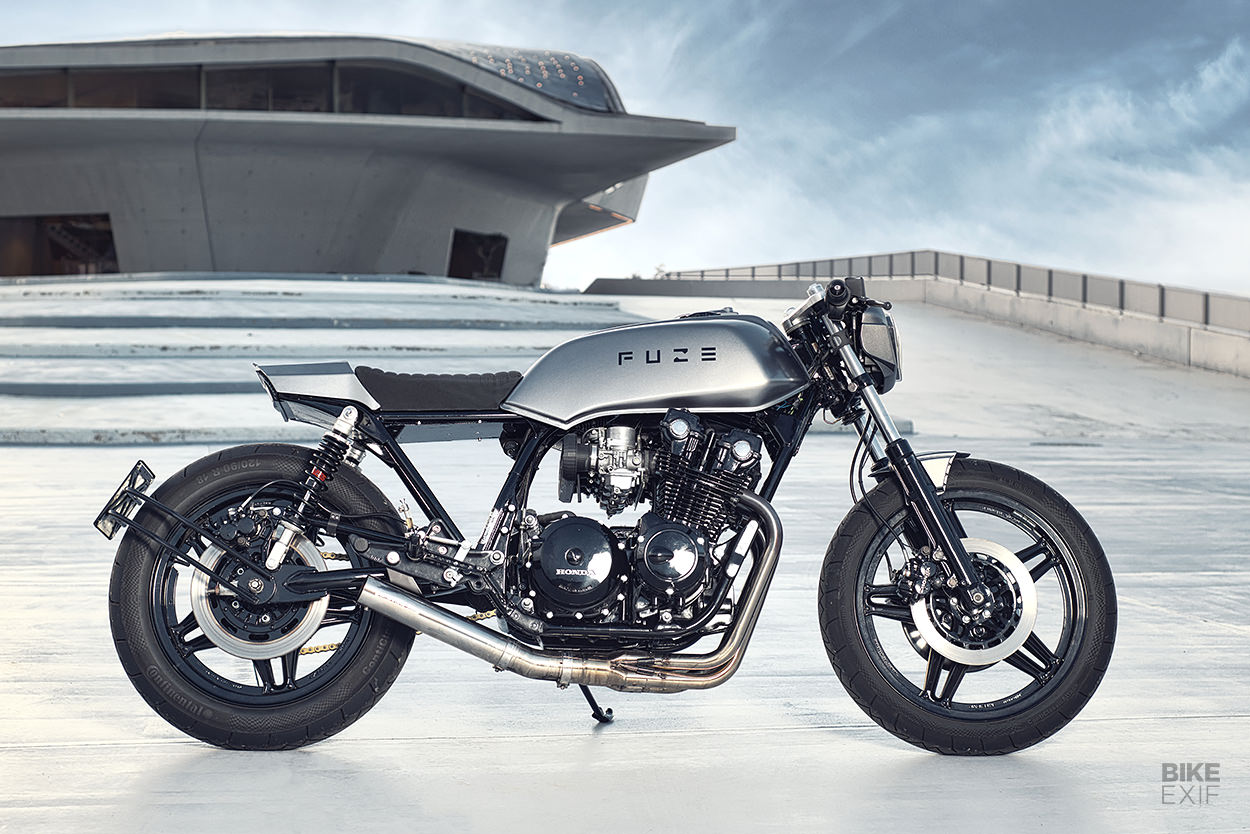 Honda CB750F by Fuze Modern manufacturing techniques such as 3D printing have permeated the custom scene extensively over the past few years. And even if you’re a traditionalist, it’s hard to ignore the benefits, especially when it comes to prototyping, refining and replicating parts. 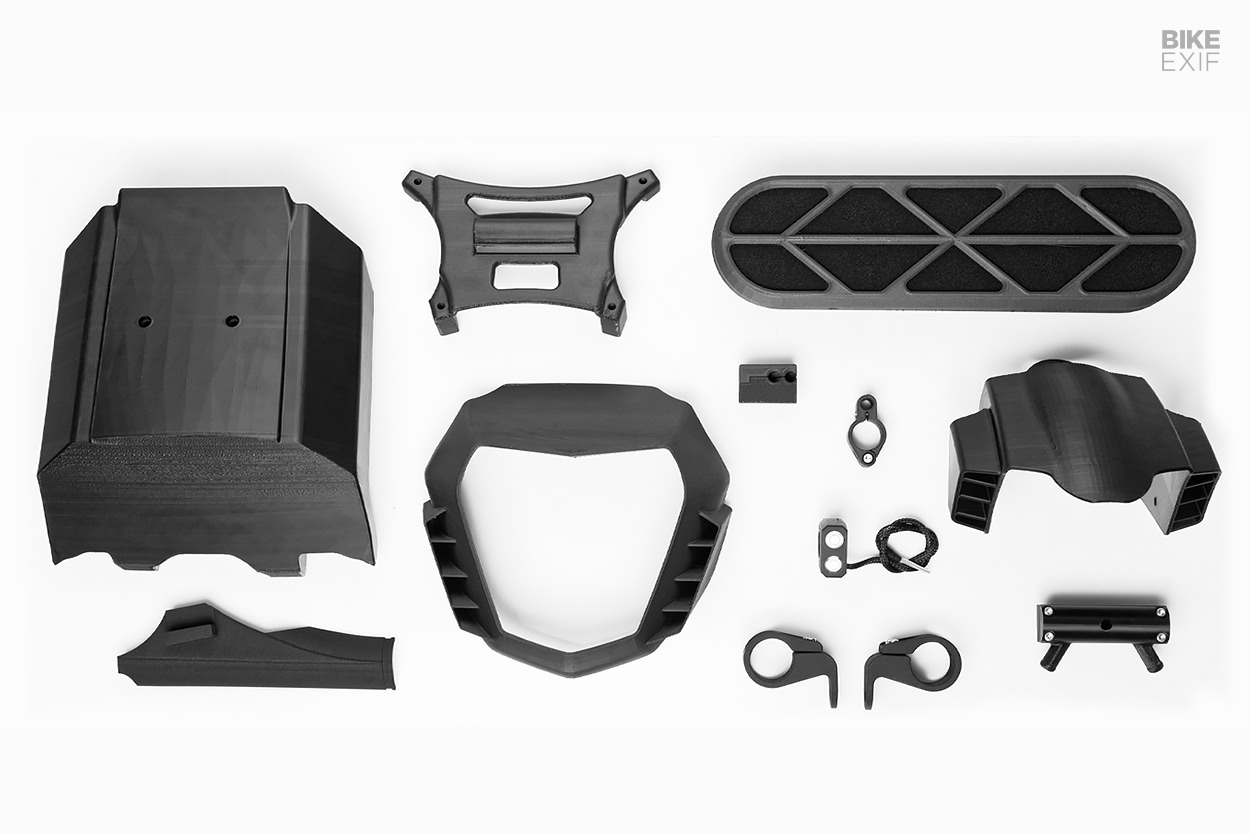 The whole vibe of Fuze is minimalism, so this CB has been stripped down to the bare essentials. The guys kept its OEM fuel tank, but redesigned everything else, opting for a neo-futuristic ’80s look that takes inspiration from the angles of the tank. Most parts were 3D printed using tough ABS plastic and are now available as plug-and-play kits.

Fuze started in the rear, with a new rear hump that plays off the classic cafe racer and endurance racer shapes. It also houses a lithium-ion battery and an integrated taillight arrangement that uses LEDs borrowed from a Honda scooter. The team went through 30 prototypes before they were satisfied, but the last part will fit any CB750, as long as you cut out the subframe first. 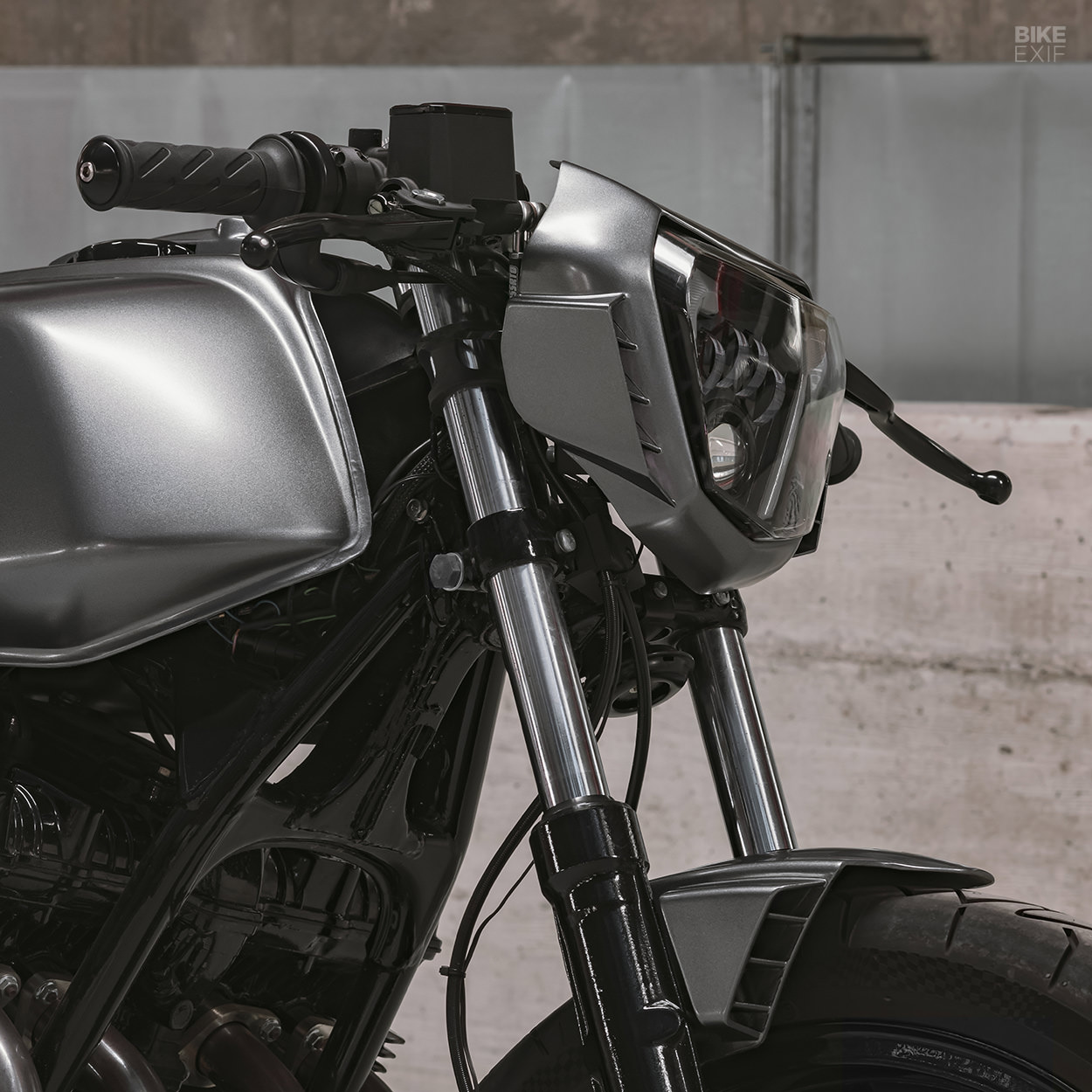 At the opposite end is a bespoke nacelle, wrapped around a KTM headlight. There’s a new, lower front fender, and both pieces feature “fins” inspired by Honda’s fire-breathing CBR1000RR-R.

Just behind the headlight is a CNC machined upper yoke which also houses a small Motogadget speedometer, new clips and bespoke switches. The entire bike has also been rewired, using a blue Motogadget mo.unit control box and high-end automotive electrical connectors for easy maintenance and troubleshooting. 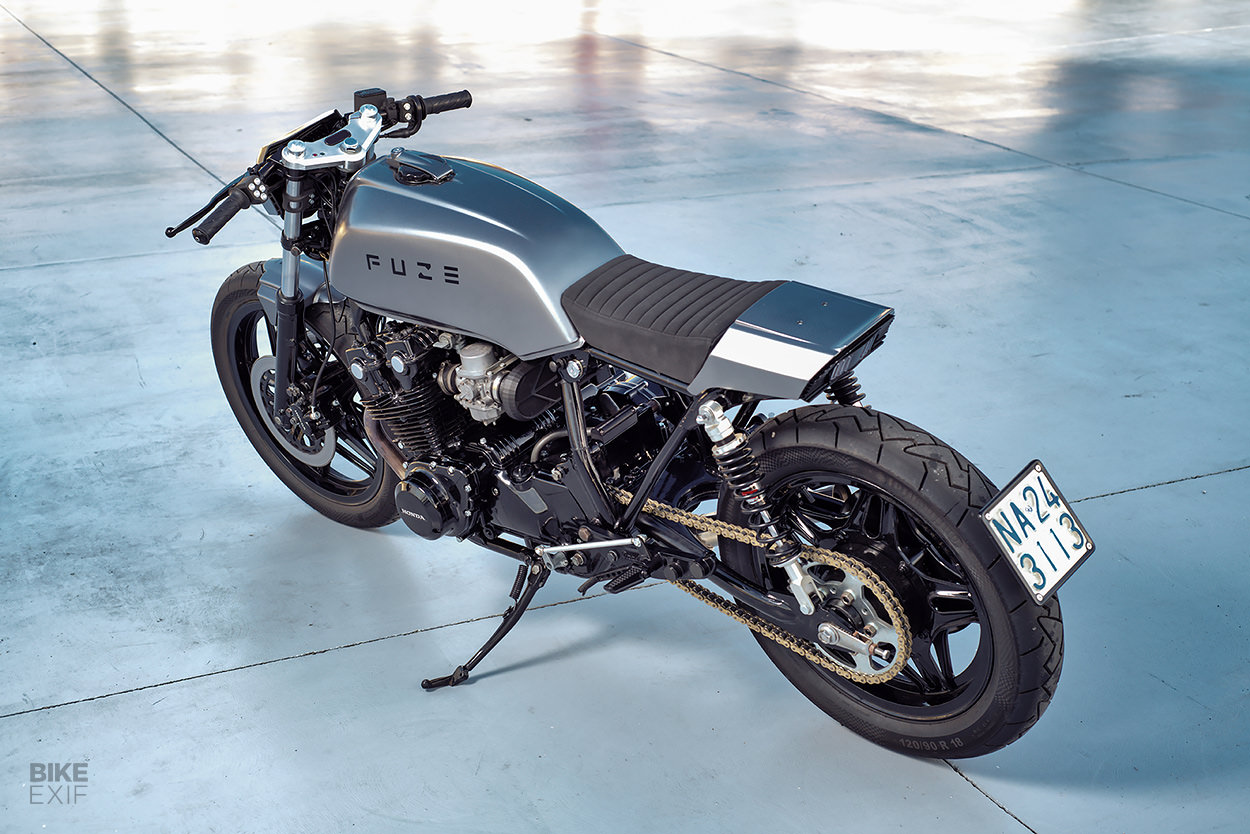 The CB750 retains its stock wheels, but they have been wrapped in Continental ContiAttack tires. The front forks have been overhauled and filled with heavier oil, and there’s a new pair of YSS shocks out back. Fuze also designed his own air intake, installed a four-into-one exhaust from Devil and tuned the bike with a Dynojet kit.

Other upgrades include blacked out Raask footpegs, Accossato brake hoses and a Brembo front master cylinder lifted from a Ducati Monster. As for the paint, it’s a ‘Frozen Gray’ BMW color, which took five tries to get perfect; not too matte, not too shiny. 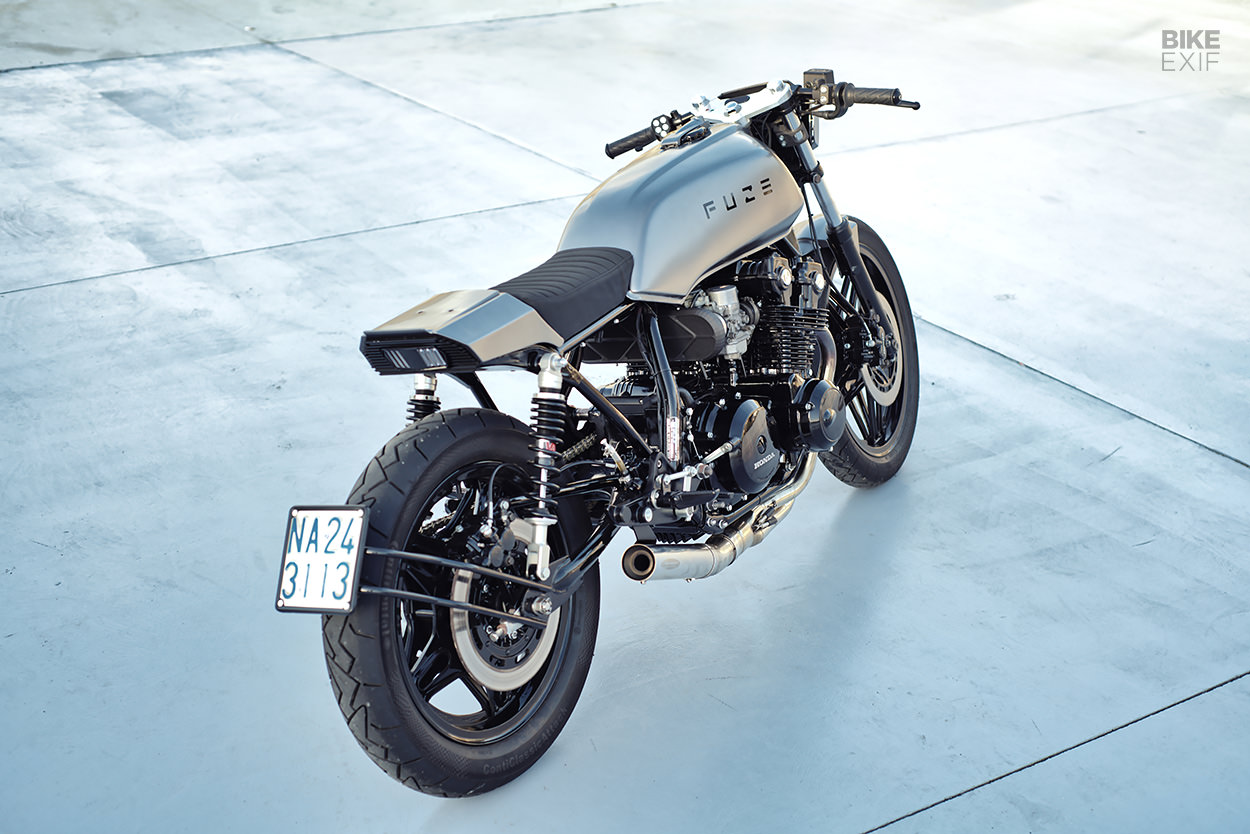 Fuze’s contemporary take on the CB750 is a welcome departure from the usual Honda cafe racers we see. And we love that it can be replicated, provided you have a healthy credit card and at least a bit of know-how. [Fuze] 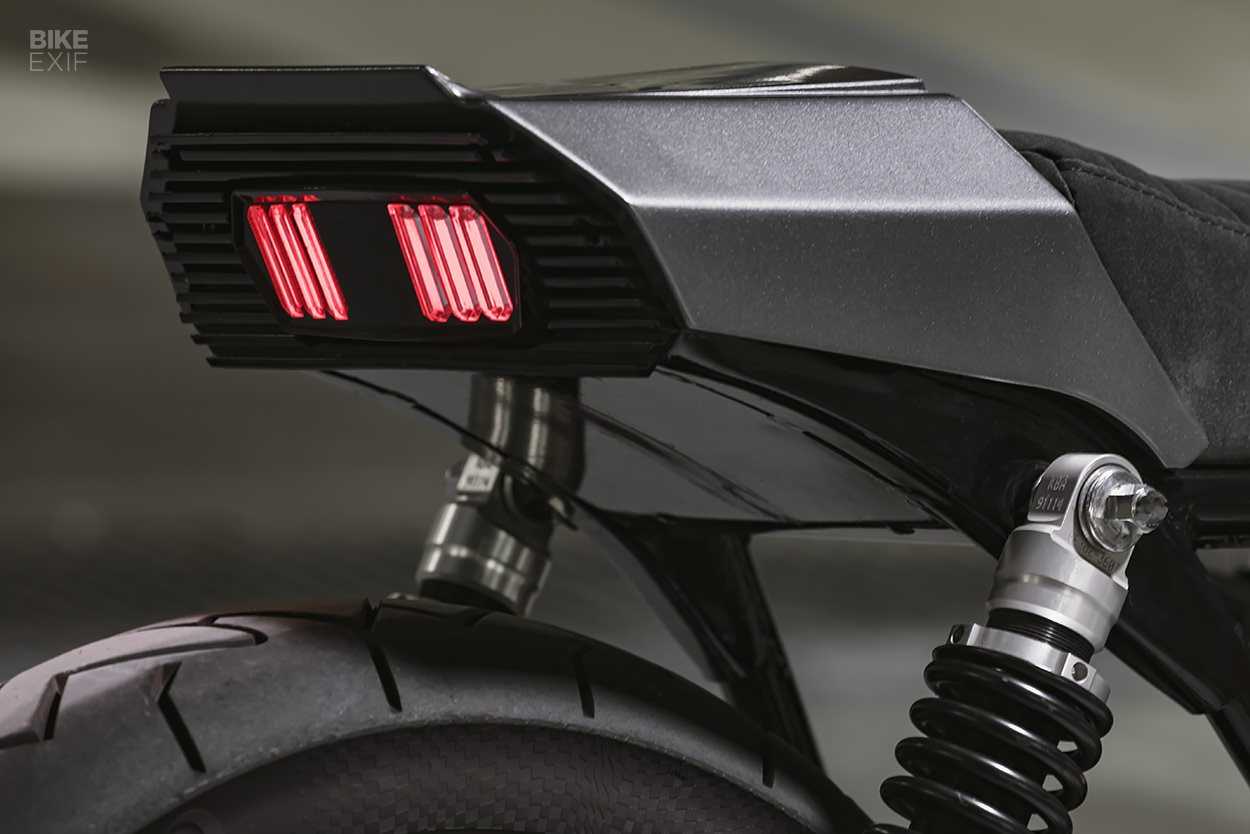 Jermaine O’Neal Reveals How Miami Heat’s Diet Program Forced Him Out: “The Oreos Are Watching Me. And I couldn’t bruh” – Basketball Network