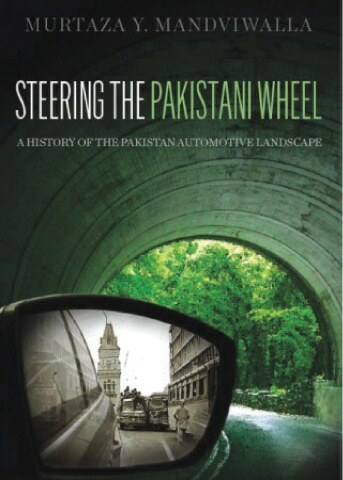 Murtuza Y. Mandviwalla – Chairman and CEO of Mandviwalla Motors Group – has spent over 40 years in the Pakistani automotive industry, which certainly makes him knowledgeable on the subject of cars and more.

His book, Steering the Pakistani Wheel: A History of the Pakistan Automotive Landscape, is a valuable effort to bring together historical facts about the Pakistani automotive sector and the struggles of stakeholders in building a viable automotive landscape despite the political environment. chaotic country.

The book provides an overview of the development of Pakistan’s automotive sector, from American and European vehicles that were standard before Japanese rule, to the current influx of Korean and Chinese brands.

There is also a lot of valuable information about the role of individuals and families who dared to take the first steps in creating the local automotive industry and creating jobs in assembly plants, sales industries and sales/distribution networks. Much of this information is not available elsewhere, making this book an important historical resource.

A fascinating section is the “Milestones Timeline” which gives a year-by-year recap of the automobile’s history from 1896 to 2020.

According to this timeline, from 1896 to 1915, the Sindh Registration Register noted “1,322 movable property…(including motor vehicles)”. In 1932, the author’s grandfather, Ghulamali T. Mandviwalla, started a bicycle and tire company. In 1946 Mercedes Benz was introduced in Pakistan and in 1949 General Motors of the United States set up an assembly plant in Karachi.

The years 1950 to 1970 were an effervescence. Vespa, Chrysler, Ford, Dodge, Mazda, Toyota and Datsun have arrived in Pakistan. Allwin (now Atlas) Engineering produced auto parts. Batteries made by Exide. Shershah’s famous scrap metal and auto parts market has opened. Lambretta and Honda motorcycles, as well as Bedford trucks, began to be assembled locally.

And then the industry was nationalized.

The 80s ushered in Pak Suzuki, Daihatsu and the Pajero culture. The first Suzuki FX was rolled out at the Awami Autos factory. In the 1990s and 2000s, many brands left the Pakistani market, while others, including Korean brands such as Kia and Hyundai, entered. Indus Motors discontinued the Daihatsu Cuore after 11 years and Pak Suzuki retired the Mehran after 35 years in production.

The book will certainly help readers analyze how automotive has been one of the most promising sectors in Pakistan, especially in terms of contribution to government revenue, job creation, foreign investment and development. providers.

Mandviwalla explains that in its early days, Pakistan’s auto industry was import-based, followed by semi-dismantled – or partially assembled – companies. The progress of the 1960s was mainly based on the growth of the spare parts sector, foreign investment and aid. This was followed by the nationalization and gradual development of the vending machine industry.

The author takes us through 70 years of ups and downs, policies that helped and others that forced many brands and dealers to pack up and leave the country.

He explains how a suppression program – where Pakistan gradually acquired manufacturing technology – was set up, then later developed into a tariff-based system. The industry was reprivatized, but interference from political and other groups deterred continued growth. The Automotive Industry Development Program (AIDP) provided guidance but was not fully implemented. Despite many obstacles, however, by 2012 the industry had reached its production zenith, reaching milestones in the manufacture of cars, motorcycles and tractors.

The 2016-2021 automobile development policy provided interesting opportunities for 12 Chinese and two Korean projects. The author writes that in 2020 the government announced an electric vehicle (EV) policy and started preparations for a new automotive policy.

Pakistan’s automotive landscape has been repeatedly manipulated by regulators and government leaders. Unfavorable policies and lack of financing opportunities have forced many investors to close up shop, and the author rightly points out that “the state has not provided the people with efficient transport alternatives such as in common, rail, river and air. There are no substantial plans that will alter the storyline.

Government after government built roads but failed to recognize the importance of affordable transportation as a key driver of economic growth and continued to tax the entire landscape heavily. The ripple effect has been a higher cost of road transport for the population.

The author believes that the automotive sector should not be a scapegoat to fill the gap in the annual budget. Tax processes should be reviewed as the imposition of more and more taxes at each stage of the value chain affects the final price of the vehicle, which is quickly becoming out of reach for most Pakistanis.

Mandviwalla also seems unhappy with what he sees as the outdated practice of selling vehicles through dealerships – who are, for tax purposes, commission agents – and charging for the sale through the manufacturer. /distributer.

He suggests that sales transactions be routed through a process in which the dealer buys the vehicle from the manufacturer, sells it on its terms to the customer, and pays value-added sales tax on the transaction. This is practiced all over the world and is, according to Mandviwalla, the way to go.

It also highlights other contentious issues, such as manufacturers reluctant to transfer technology to component manufacturers, import transfer pricing, and various forms of indirect transactions to reduce costs.

Mandviwalla says the general criticism voiced in the media is about car assemblers working off people’s money by taking prepayments, passing price increases on to customers, charging extreme bonuses and ultimately cartelizing the industry.

While there is substance to some of these claims, the author is of the opinion that automakers expect to receive returns on their investment. In the absence of a coherent policy and political stability, automakers view Pakistan as a high-risk country. High profit margins to mitigate risk are strategic.

It’s also worth noting that despite massive progress around the world, our industry remains stagnant and local assemblers of two- and four-wheelers continue to roll out decades-old models.

Pak Suzuki, for example, managed to keep the obsolete Mehran in production for 35 years. The Cultus and Alto lasted 16 and 12 years respectively without any overhauls, while the Bolan and Ravi remained unchanged for decades.

Indus Motors took years to revamp the Toyota Corolla and Atlas Honda – famous for updating the model every five or six years – took 12 years to release an all-new City.

As far as bikes go, the CD70 sits static from 2003 and the CG125 hasn’t been serviced in 30 years. The price, however, gives buyers a shock – sometimes several times a year. The price increases are conveniently blamed on the falling rupee and rising input costs, even though CD70 manufacturing is 96% localized.

In the preface to the book, Mandviwalla states that its aim is to provide “a platform for research into the various aspects of the automotive web and to please the automotive enthusiasts who read it”. It certainly achieves that goal. The analysis of the more technical aspects of the industry, from manufacturing to financing to the political environment, will certainly be useful to those interested in the workings of Pakistan’s automotive history.

“Car buffs” will also find it appealing, but there’s plenty to capture the interest of casual readers as well. There are vintage photographs and advertising notices offering deals that are sure to make today’s eyes pop – an advert from 1927 quotes the price of a Chevrolet Touring Car at Rs 2,800.

He speaks to the people who led the industry in its early days and shares their memories with readers. He wanders through the narrow streets of Shershah, where tiny anonymous shops sell stolen coins. He writes about rickshaws and taxis and the madness that masquerades as city traffic.

Buying a car is a major household event, notes Mandviwalla. “Mithai [sweets] [are] distributed and Sadqa [charity] This same car also represents a livelihood for several other households: from the worker who built it, to the salesman who sold it, and to the mechanic who will repair it. Then there are the racers – from motorcycles and cars, women and men – and collectors.The famous Bahawalpur collection makes its appearance, as does the Vintage Classic Cars Club.

Each of these people has a story to share, and the author includes them all, united as they are by their enthusiasm for the automobile in all its forms.

The examiner is a staff member

Ipswich-Felixstowe Classic Car Race 2022: Have you been there?