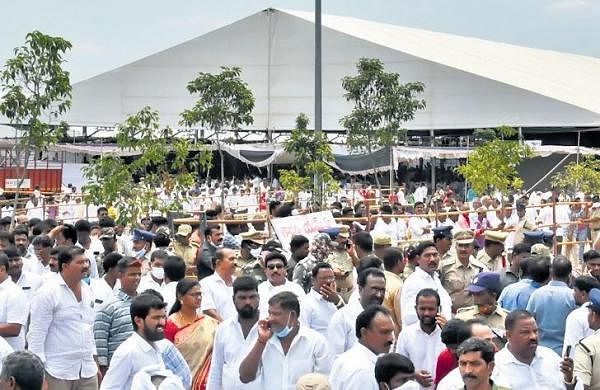 VIJAYAWADA: The swearing-in ceremony for Jagan Mohan Reddy’s new cabinet, held near the State Assembly on Monday, reflected the flip side of the coin at a time when dissent within the YSRC is become visible. Hours before the actual start of the ceremony, supporters and followers of the newly inducted ministers flocked to the venue for the swearing-in ceremony in Velagapudi and the police struggled to regulate traffic. The event kicked off at pre-designated Muhurat from 11:31 a.m. with the national anthem.

Sattenapalli MLA Ambati Rambabu was the first to take the oath as the oath of office and secrecy were administered in alphabetical order. As he takes the oath as minister, his supporters applaud him. Most newly inducted ministers chose to take the oath in Telugu. Audimulapu Suresh, KV Usha Sricharan and Peddireddy Ramachandra Reddy were sworn in English.

Gudivada Amarnath and Jogi Ramesh actually got down on their knees and almost touched the ground to greet the Chief Minister after he was sworn in as ministers. After greeting the Chief Minister by touching his feet, Roja kissed his hands to express his joy at being appointed Minister. Some senior citizens greeted Governor Biswa Bhusan Harichandan first and then the chief minister.

Family members of several new ministers present at the scene expressed their joy and captured the moments when their loved ones were sworn in on their cellphones. The entire hall rang out with applause and whistles as Ambati, Gudivada Amarnath, Jogi Ramesh, Usha Sricharan, Roja and V Rajani were sworn in as ministers.

After taking a group photo with the governor and the chief minister, the new ministers shared their happiness during the tea party with their family members and supporters, who congratulated them with shawls and bouquets of flowers.

Some of the ministers like Roja, Usha Sricharan, Jogi Ramesh and Buggana Rajanedranath addressed the media and said that they would strive to develop the state in all areas and wholeheartedly follow the ideals of Jagan Mohan Reddy to make social justice for all.