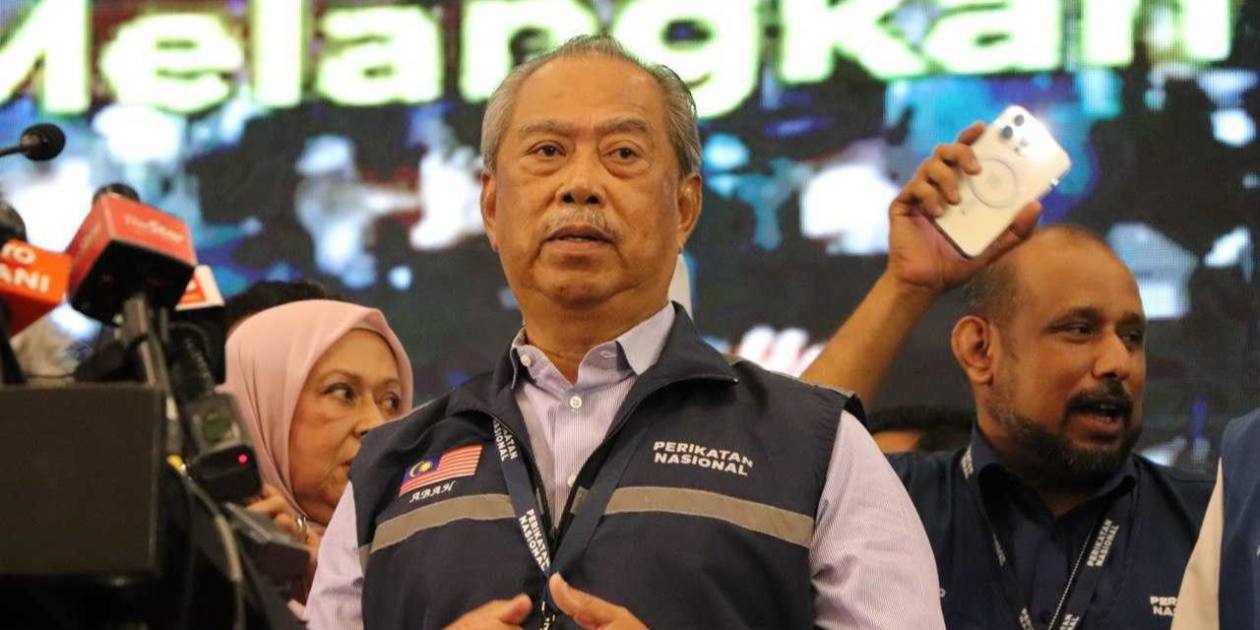 KUALA LUMPUR — Malaysians voted in a crucial election on Saturday, with several parties neck and neck amid headwinds from the global economy.

Nearly 1,000 candidates, the oldest of whom is 97-year-old former Prime Minister Mahathir Mohamad, are vying for 221 seats in parliament. The latest polls showed that none of the three main camps were on track to win at least half the seats, possibly prompting a scramble for alliances to form a government.

The opposition Hope Pact led by longtime leadership aspirant Anwar Ibrahim is aiming to reclaim the mandate it won in 2018, which was wrested from it by the outgoing National Front following unprecedented political manoeuvring. The National Front’s nucleus, Prime Minister Ismail Sabri Yaakob’s United Malays National Organization (UMNO), sees the loss as a blow in its otherwise unbroken run for power since independence.

Voting ended at 6 p.m. local time, with results expected to crystallize in the early hours of Sunday.

3h20 National Alliance coalition leader Muhyiddin Yassin says his alliance will form the next government together with other parties. The National Alliance, which has won 70 seats so far, is expected to work with the National Front, which has 30 seats, and the Borneo parties, which have won 31 seats so far. Muhyiddin, however, did not commit to any agreement with any party and added that all negotiations will be completed by Sunday evening.

3h15 Anwar wins the seat of Tambun in the northern state of Perak by 3,736 votes. He defeated former federal minister Faizal Azumu, who represented the National Alliance coalition.

2am The electoral commission reports that of the 222 seats in the running, the National Alliance led by former Prime Minister Muhyiddin Yassin is in the lead with 62 seats, ahead of the 61 of the Pact of Hope led by Anwar Ibrahim. The ruling National Front has so far claimed 26 seats. .

12:00 p.m. The Pact of Hope led by Anwar Ibrahim officially won 28 seats and is seen leading in 65 constituencies, while the National Alliance led by former leader Muhyiddin Yassin was declared the winner in 26 seats while leading in 43 seats. The ruling National Front wins 15 seats and leads to 18 seats.

11:50 p.m. Former Prime Minister Mahathir Mohamad failed to defend his parliamentary seat in Langkawi, an unofficial tally confirms. He lost his deposit after failing to obtain at least 20% of the votes cast. Mahathir, 97, who served as the country’s prime minister twice for a cumulative 24 years, trailed the National Alliance winner by more than 11,000 votes.

This is Mahathir’s first defeat in the legislative elections since 1969. He was running for his 10th term as a federal legislator.

Mahathir told Nikkei Asia in a recent interview that he would retire if he lost his seat. 9:20 p.m. The Pact of Hope led by Anwar Ibrahim is seen as leading in 54 constituencies, while the National Alliance led by former leader Muhyiddin Yassin is leading in 37, based on unofficial figures. The ruling National Front is seen lagging behind, with an advantage in just 17 constituencies. Vote counting continues and is at various stages across the country.

8:20 p.m. The Pact of Hope led by Anwar Ibrahim leads in 47 constituencies, while the National Front leads in 13. The constituencies are at different stages of counting.

Unofficial results come from respective state polling centers, where official numbers will not be announced until after all votes are concluded in a precinct. 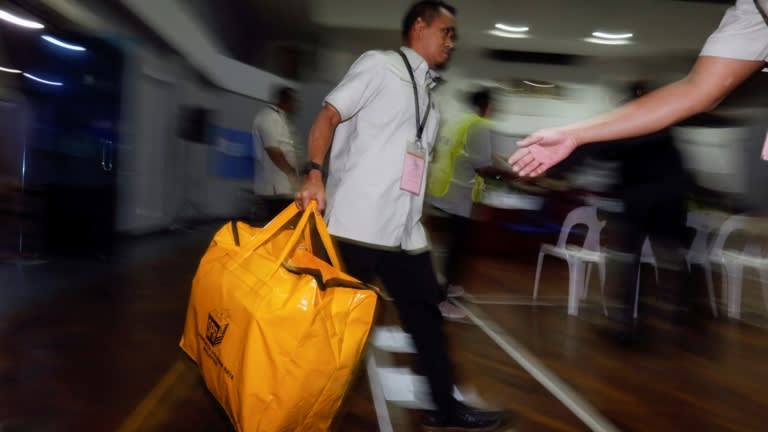 A ballot box arrives at a counting center in Subang Jaya, Selangor, Malaysia on November 19. © Reuters

The ballot boxes will be sealed by officials of the Electoral Commission and transported to the counting centers. Each parliamentary constituency will have a counting centre.

5:25 p.m. The electoral commission has suspended voting in Baram, on the island of Borneo, due to bad weather. This means the total number of seats up for grabs on Saturday will be 220, down from the original 222. A separate polling date will be announced in due course for Baram as well as Padang Serai, where voting has been postponed until next month due to the sudden death of a candidate.

3:55 p.m. Some Malaysians took the opportunity to participate in role-playing games, showing up to vote dressed as superheroes like Captain America, Predator, Iron Man and Power Rangers.

3:45 p.m. Participation is a key factor to monitor. Another is how young citizens vote. As many as 1.4 million of the 21.17 million eligible voters are first-timers, after the minimum age was lowered from 21 to 18. 2:15 p.m. The electoral commission indicates that 50% of voters had voted at 1 p.m., a slower pace than in 2018 when the percentage was at the same time of 55%. However, this year the voter base is larger and the number of voters casting their ballots at 1 p.m. was 10.5 million, up from 8.22 million four years ago.

2:00 p.m. The Department of Meteorology is warning of thunderstorms and heavy rain in the southern state of Johor and parts of Sabah state on the island of Borneo. 1:50 p.m. The country’s electoral commission tweets that as of noon, 42% of voters had voted. The participation rate in the last federal election, in 2018, was 82%.

1:20 p.m. Skies over the capital are clearing after an early morning drizzle, but local media are reporting voters in the interior of Sarawak state, Borneo, are braving floodwaters to cast their ballots. 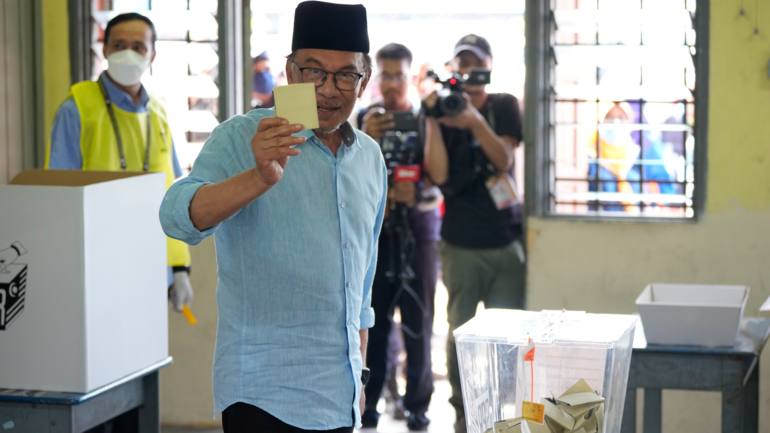 11:10 a.m. Anwar Ibrahim, who leads the opposition Hope Pact coalition, arrives at a polling center in Penang state and votes alongside many other citizens. Ismail Sabri Yaakob, Prime Minister and Deputy Chairman of the ruling UMNO, is also seen voting in Bera, Pahang state.

8:00 a.m. Election day is underway as polling stations are fully open. A key question is how the monsoon season might affect participation. The Meteorological Department gave a mixed forecast for Election Day, with rain expected in parts of the country. Women show their inked fingers after voting at a polling center in Kuala Lumpur on November 19. (Photo by Hakimie Amrie)

07:00 Pollster Merdeka Center for Opinion Research, in its latest poll on Friday, predicted the opposition Hope Pact coalition would lead with 82 seats, out of 221, followed by the National Alliance with 43. UMNO is expected to get 15 seats, 45 of which are considered a toss up.

Can I get a car loan if I’m disabled?