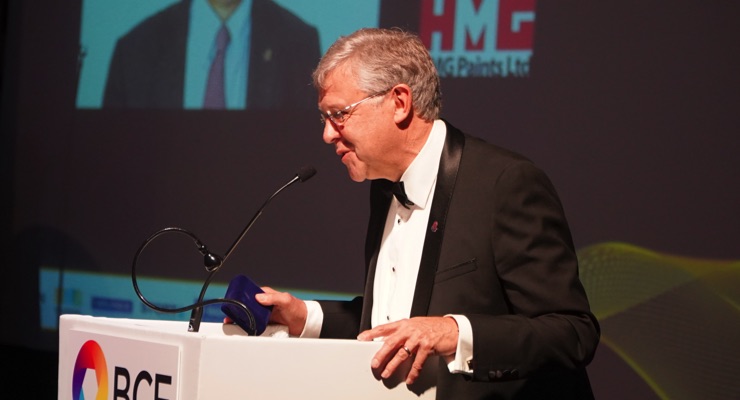 By Brandy Hudson On Dec 7, 2021
Share
The Silver Award, the most prestigious honor bestowed by the British Coatings Federation, recognizes an individual who has provided exceptional service and an outstanding contribution to the growth and reputation of the coatings industry. This year’s Silver Award winner, HMG Paints chairman John Falder, certainly meets those high standards.

For over 40 years, Falder has been actively involved in the coatings industry, serving as President of BCF between 2014 and 2016, chairing key committees and playing an important role in the development of several industry initiatives.

“I have been actively involved in the industry and with the BCF for over 40 years, playing a leading role in the development of several industry initiatives, such as the Apprenticeship Training Program and Coatings Care, Paintcare and the industry’s health, safety and environment program, ”Falder said.

“Over the years, I have also chaired the Industrial and Powder Coatings Council and the Vehicle Finishing Committee, as well as a member of the General Use and Finance Committee,” he added. “It has been a tremendous privilege to serve as President of the President of BCF between 2014 and 2016. BCF is a fantastic organization that represents our industry extraordinarily well in all respects and they are totally committed to the greater good of the coatings industry. “

To say that Falder has been in the painting industry most of his life would be almost an understatement, as he started in the family business when he was 7 or 8 years old.

“I have been involved with our family business, HMG Paints, then H. Marcel Guest, since before I can remember! Falder recalls. “From the age of around 7 or 8, I accompanied my father and my grandfather, Herbert Falder, founder of H. Marcel Guest, on Saturday mornings to help with the work and tasks.

“My very first job was sticking labels and wrapping tubes of adhesive,” he noted. “Child labor? Absolutely not – it was fantastic, and a good Saturday morning earned me a salary (2 shillings and 6 old pence to be exact), which was spent later in the day at a local toy store.

After graduating from Bangor University in Chemistry and Marine Biology, Falder began his full-time career with HMG at age 21.

“Upon joining the family business, I started working in all departments to gain experience and attend networking and knowledge sharing events of associations such as the British Coatings Federation (BCF), known at the time as the Paint Makers Association of Great Britain. ,” he added.

Falder can recognize many accomplishments during his time in the paint and coatings industry, and it begins with the success and growth of his colleagues and family members in the company.

“Our culture is centered on the development of our employees and their fulfillment in what we do,” he observed. “The business is about the HMG team. The way this team of people and former employees has nurtured and dedicated their time to my family business over the years is why we are still here today and thriving. I am confident to say that I work with the best team in the coatings industry and have had a most enjoyable career.

“Most recently, we received the Business Hero Award from the UK Chambers of Commerce as well as the Corporate Social Responsibility Award (by the BCF) and the Essence of Family Business Award for our hard work throughout the pandemic, which highlighted the best HMGs and the people in the business, ”Falder said. “When the country was battling a global pandemic, our lab technicians got down to work to produce a hand sanitizer in the formulation recommended by the World Health Organization (WHO), which was then donated to health services. emergency rooms, nursing homes, schools and key workers. “

Falder refers to his grandfather and beyond as major influences in his life.

“Of course my grandfather and dad were huge influences and as a family business we forged our own path and as my dad said in an interview a few years before he passed away in 2019 , “In terms of working with products and learning, we did everything ourselves, we didn’t have influencers because we were the influencers as a team, we were our own role models,” said Falder.

“At 36 years old, I took over from my father Brian as Managing Director of HMG and through the growth of the company one thing that has remained the same and passed down from generation to generation is s ‘Ensuring the company follows its core values ​​of’ decent, worthwhile and safe ‘for the employees of HMG Paints, ”added Falder. “My absolute belief is that the HMG business is not the bricks, the machines and the mortar, it is the business that we keep, which is our people.”

Over the years the paint and coatings industry has evolved and Falder has gone through many changes.

Outside of work, Falder has a wide range of hobbies, starting with painting, as well as family and outdoor activities.

“In my spare time I do oil paintings, and earlier this year I had a successful exhibition as a commercial artist in a well-known gallery in Anglesey, Oriel Ger Y Fenai,” a Falder said. “I like spending quality time with my family, especially by restoring vintage cars with my son Jonathan. We recently completed a restoration on a 1930 Model A Ford (no more painting!). I’m an avid golfer and also had a soft spot for a round or two of table tennis with my HMG colleagues at one of our rest areas (although I’m slowing down these days!) of interests is long: boating, fishing, golf, motorsport, cooking, walking, travel, crafts and not to mention my love for Manchester City Football Club (never miss a home game!).

Falder said receiving the BCF Silver Award is a “tremendous honor and humility”.

“Peer recognition from industry colleagues is about as special as it gets,” he added. “As a family, we have a passion for painting, and clearly, I inherited the virus! We are part of a great industry and it has been a privilege to work with everyone.

Speaking with his colleagues at HMG Paints and BCF, it’s clear that Falder is held in high regard by all.

“John Falder exemplifies the commitment to the industry for which the Silver Medal was created to recognize,” said Tom Bowtell, Managing Director of the British Coatings Federation, announcing the award. “He has been a prominent figure in the coatings industry and is a strong supporter of BCF. We would like to thank John for his support and expertise over the years and congratulate him on this well-deserved honor. “

“John is an absolute ambassador for the coatings industry and it’s great to see John receive the recognition he fully deserves,” said Steve Hutton, COO of HMG Paints.

“John has always been a passionate advocate for the coatings industry, playing an important role in the BCF,” added Steve Crossman, COO of HMG Paints.

“The Silver Medal recognizes those who provide exceptional service and make an exceptional contribution to the growth and reputation of the industry,” said Gracienne Ikin, Head of Brand Development and Communications for HMG Paints. “Frankly, I couldn’t think of a better recipient of the award than John Falder. His dedication to the coatings industry over the years has been second to none. I’m pretty sure he has paint, instead of blood, flowing through his veins!

“I have worked with John since 1987, since then I have sold around 80 million pounds of paint,” added Paul Edwards, Sales Director of HMG Paints. “During that time I have met, as you can imagine, quite a few leaders in the industry, but no one like John. His passion is contagious, working honestly with John has changed my life. My daughter now works at HMG and is about to graduate from Salford University, that was John’s vision again.

“My uncle, John Falder, has been totally and absolutely dedicated my life to the coatings industry and all that is associated with it,” concluded Rebecca Falder, Company Secretary. “I can’t think of anyone who is more passionate and concerned with what he does, and he has always gone out of his way to encourage and inspire others to share his joy in the world of painting. The British Coatings Federation picked a fantastic medal recipient, and I couldn’t be more proud.