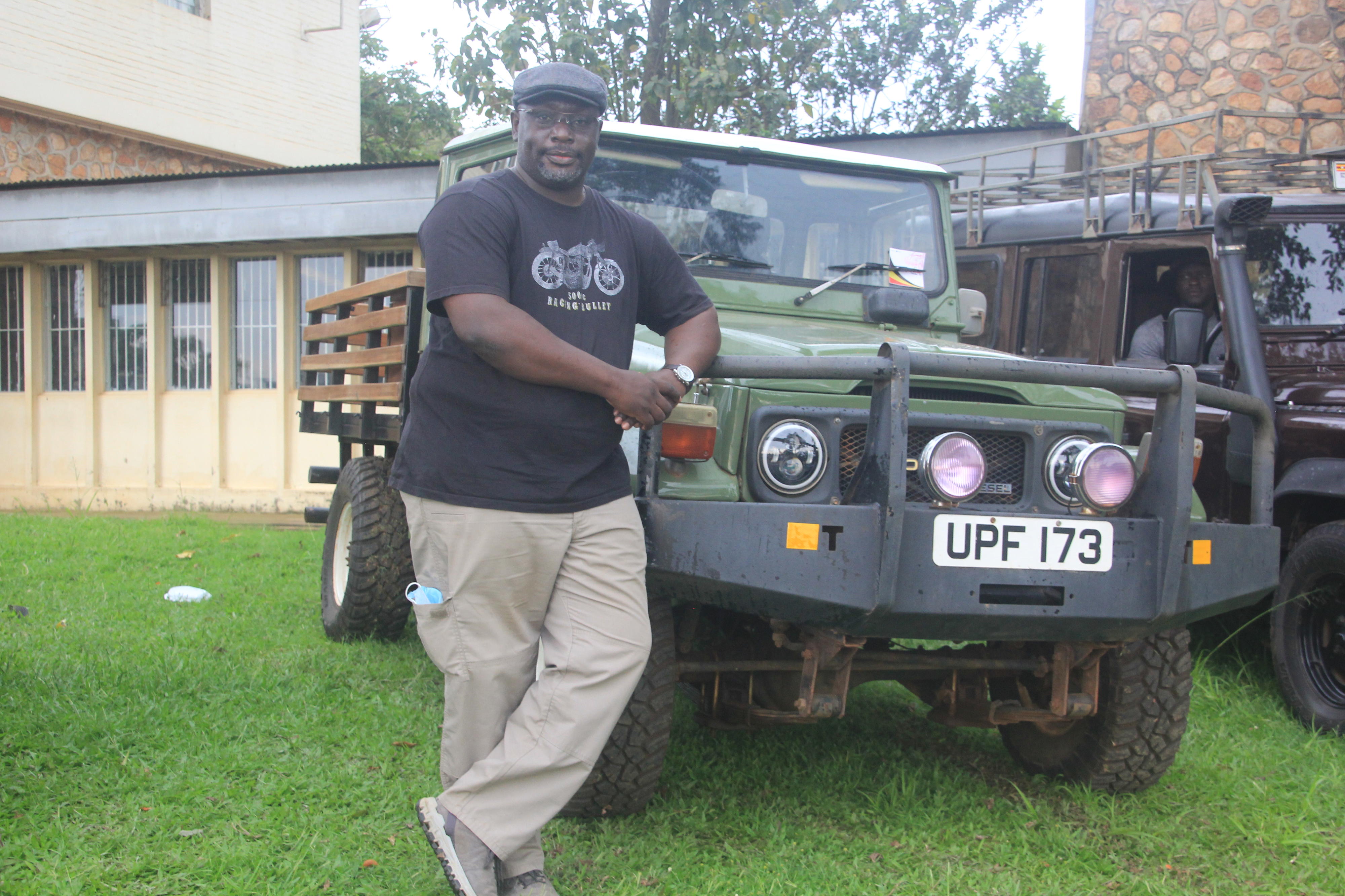 Mwebaza Isharaza has owned the Toyota Land Cruiser HJ47 for almost two years. The HJ designation means that it runs on a diesel engine. However, in its series, FJ would mean that the vehicle runs on a gasoline engine.

The car was originally owned by Isharaza’s close friend, the late Paul Sherwen, who not only picked it up from a scrapyard in Kitgum district, northern Uganda in 2005 where it was rotting, but also carried out its first stages of restoration. Sherwen was a commentator for the Tour de France, an annual cycling tournament held in France.

“When Sherwen passed away, his wife Katherine agreed to sell me the vehicle,” Isharaza says.

History and restoration of the car

Isharaza recalls Sherwen transporting the unique HJ47 Land Cruiser to a workshop in Kampala by a car transporter where it was dismantled to the chassis stage before restoration work began. The restoration process, which Isharaza has no idea the cost of, took four years to reach a state where the late Sherwen could take it.

“The whole body of the car was damaged and the color could not be recognized. The rear bed had also rotted before it was rebuilt with wood, ”Isharaza explains.

However, Sherwen did not restore the wooden bed in the back to its current state. When Isharaza purchased the vehicle, the bed including its storage case had to be upgraded using a stronger mvule wood which was then polished to a shiny appearance.

“I also changed the braking system. It originally had the drum braking system which was converted to disc braking. Most of the engine cooling system had to be redone. The aesthetics at the front had to be changed from glass lamps with a built-in bulb to light-emitting diode (LED) lamps. Restoration is always a continuous work in progress and it’s something that runs through all vintage vehicles, ”says Isharaza.

Nothing was restored on the dashboard and interior, except for the seats which were replaced from a long flat seat to two single bucket seats. The current seats are from another Land Cruiser. The original windshield and windows are still intact. But if you take a close look at the car, some of the rubber window moldings need to be replaced because they have hardened. The wipers were also replaced as the old ones caused damage to the windshield.

“The problem with calculating value is that you can’t put money into things like passion. You also have to be creative in some of the work you do, ”Isharaza notes of the 2400cc diesel powered machine.

Part of the vintage value of the HJ47 Land Cruiser, like most, if not all, other vintage cars is that Isharaza doesn’t drive it much. This mechanically means that the maintenance intervals take a little time.

For example, he performs maintenance once every four to five months and drives it once a week, especially on weekends, and quite often when he has utility jobs such as farm visits, the reason for which he fills his fuel tank once every three months.

“Spare parts are locally available and always in use. It runs on a simple 2H motor which is not only easy to maintain but is also powerful. It rolls like a train and can take you anywhere, ”says Isharaza.

To maintain it, Isharaza spends 400,000 Shs. However, it depends on whether he changes the fuel filters, as he doesn’t have to change them every time he services the car.

Originally the vehicle had UWX license plates which were duty free from the 1970s, which were converted to UPF 173 which were not duty free in the mid 1980s.

The Isharaza furthest from the car are Jinja and Entebbe. He is soon making his maiden voyage to Mbarara and Kabale in western Uganda. Its maximum speed limit is 160 km / hour but Isharaza never exceeds half that speed.

Isharaza says he hasn’t driven a car as stable as the HJ47 on the road and which moves through mud and ravines like an off-road monster due to its rugged suspension system and muddy terrain tires with large treads.

It works with a four-speed manual gearbox, with an option to turn it into five-speed. However, it is not a model designed for speed, but rather for performance in terms of resistance. This is something that Isharaza’s young son, Alvin Isharaza is also proud of. Alvin also hopes to own the car one day in the future when his father can no longer drive it.

“I don’t know if I like the car as much as my dad, but it’s a nice car. It’s a solid vehicle with good endurance. No matter where you drive it will work so well, ”says Alvin.

When asked how much Isharaza would pocket if he decided to sell, he reasons; “Some things are priceless. I cannot sell because I have a strong attachment to this vehicle. It has a lot to do with Sherwen and my son Alvin. There is a lot of sentimental value.

The HJ47 Land Cruiser represents a project Isharaza thinks can’t finish. Every day he and Alvin have new ideas on what they can do with the vehicle to make it better. In fact, the two are eagerly awaiting different ways in which they can participate with the vehicle in other causes in vintage history.

How to get a business loan in 5 steps – Forbes Advisor