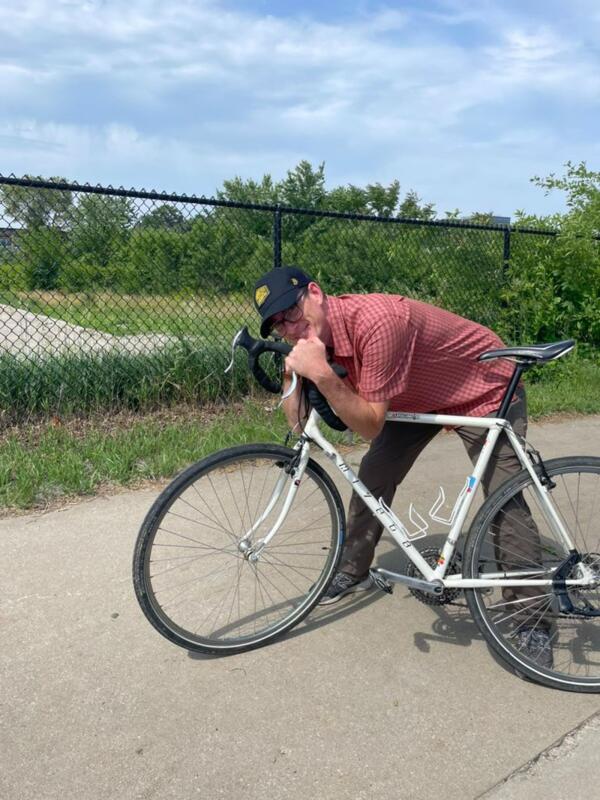 Brian Morelli hugs his beloved Miyata Alumicross bike, which was stolen June 9 from the University of Iowa campus. He was recovered on June 13, with the help of a few homeless men Morelli spoke to in Iowa City. (Contributed)

Iowa City’s Brian Morelli walks his Miyata Alumicross bike. The bike was stolen on June 9 and recovered four days later with the help of a few homeless men in Iowa City. (Contributed)

IOWA CITY — Stolen bikes don’t often end up in the hands of their owners, which is why Brian Morelli of Iowa City was surprised when he received a call on June 13 from someone letting him know that he had found his vintage Miyata Alumicross.

The bike was stolen June 9 from the bike rack outside Morelli’s office on the University of Iowa campus. He usually brings his bike inside the building but left it locked outside that day, since he was only going to be at work for a few hours.

Morelli reported the theft to the unemployment insurance police. Officers found security footage of someone taking the bike, but the footage did not show the thief’s face clearly enough to identify the person.

Knowing the police would have trouble finding the bike, Morelli took matters into his own hands.

He posted an alert on Facebook, noting that the “sweet vintage bike” is from the late 1980s or early 1990s. “It’s the only one like it in Iowa City,” he wrote. “It has been on a number of bike trips and gravel rides.

“I was driving by myself,” said Morelli, a former Gazette reporter. “I created a bunch of flyers and started handing them out to bike shops and other places around town.

He also decided to check in with the homeless community under the Gilbert and Benton Street Bridges, saying he knew homeless people would have connections to him.

He struck up a conversation with a few guys under one of the bridges and gave them a description of his bike.

“Then I asked them if they drank beer, and one of the guys that was there, he had a dog…that I was petting, and he said, ‘Oh, yeah, I drink Modelo. ‘ So, I left and then came back with a Modelo six-pack, peach gummy rings and dog treats and just left them by the bridge, just putting some good karma there I guess” , Morelli said.

A few days later, one of the men he had met called Morelli, saying he thought he had found the bike. The man sent photos of the bike to confirm, and Morelli went to get it.

“The guy who eventually found it said someone came up to the bridge with it, and he said, ‘Hey, I know someone looking for this bike,’ and apparently he traded it in. I think he traded speakers or something,” Morelli said. “He asked for a little reward, so I gave him that.”

Immediately after getting his bike back, Morelli said he went to a bike shop to get a new lock. He then called the police to let them know he had found the bike.

“They were so surprised,” Morelli said.

Bike theft is a common crime on and near the UI campus, especially when the weather warms up, according to the University of Iowa Department of Public Safety.

Community outreach worker Alton Poole said it’s easier for police to track stolen bikes if bike owners register their bikes as soon as they buy them. The unemployment insurance police and the Iowa City police have registration programs.

When a bicycle is found abandoned or confiscated by the police, officers run the serial number of the bicycle through the registration system to see if it was stolen.

It’s also a good idea to keep a photo of your bike handy and have a record of its make, model and serial number, according to Hayley Bruce, who works for the department.

Drew Boss, the chief mechanic at the Iowa City Bicycle Library, said whenever someone rents or buys a bicycle from the library, he explains the benefits of different types of locks and makes sure that he knows how to use the lock he buys before riding. stopped.

The strongest locks are U-locks, heavy-duty steel locks that go through a bike’s frame and front wheel, according to Boss.

“We also offer what we call our DIY locks, which is just a sturdy chain that we buy from a hardware store, and we wrap them with old inner tubes to make them a little quieter and a little smoother. . We’ll give them away often, if someone can barely afford the bike but really needs a lock,” Boss said.

Other tips for avoiding bike theft include keeping bikes indoors as much as possible and investing in items like Apple Air beacons or other tracking devices that can be attached to a bike.