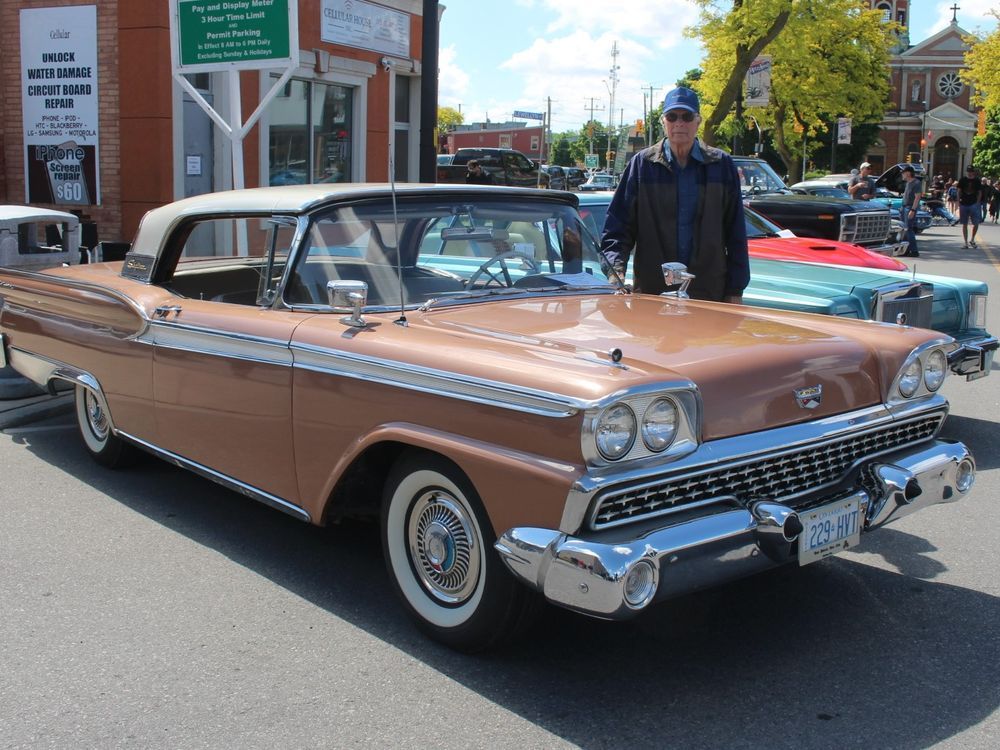 RetroFest returned as an in-person event on Saturday as COVID-19 restrictions all but lifted and thousands flocked to see the hundreds of classic cars that filled Chatham town centre.

No one was happier to see RetroFest return in person than classic car owners.

Neal Hendrie, 81, of Chatham, who brought his 1959 Ford retractable hardtop, said: ‘After two years it’s good to be out.

A longtime member of the Kent Historic Auto Club, Hendrie said he has been attending RetroFest since its inception.

It has had its Ford retractable hardtop since 1995.

“I like retractable hardtops and when I had the chance to buy one, I bought it,” he said.

But that’s not his only classic car.

Hendrie still owns the 1930 Ford Model A Coupe he bought for $200 from his neighbor when he was 17 to drive to the old Chatham Collegiate Institute.

When asked if the vehicle drove the girls crazy, Hendrie said the exact opposite.

Noting that the former Victoria Residence long-term care home was located around the corner from the ICC, he laughed: “Old people were standing on the corner pointing their canes saying, ‘I had one before.

Darren Soucie proudly displayed his 1964 Volkswagen Karmann Ghia which has a long tradition in his family.

“My day had a Karmann Ghia when he was younger so I grew up knowing them,” he said.

Soucie bought a Karmann Ghia convertible after graduating from college in 1986 and made many memories with the vehicle.

“I met my wife there, we dated, we got married and when the kids were young in 1998 we needed a second car, so I reluctantly sold it.”

When he retired, he went looking for his beloved Karmann Ghia and found her in Barrie. Soucie asked the owner if he was interested and was selling and a few years ago he bought it back after more than 20 years.

It had been a few years since RetroFest returned, but Soucie said, “It’s great to finally have it back.”

Saturday was the first time Gino Delciancio, of Leamington, brought his beloved 1955 Chevy Belair to RetroFest.

He remembers wanting a Belair ever since he first sat in it at the age of five, when his mother worked on a farm.

He bought a Belair at 17 and restored it, then sold it after 25 years.

“I regretted it, then I got this one,” Delciancio said.

“It’s a real pleasure to drive,” he added.

“There are a lot of different cars, it’s a nice sight,” he said.

Ron Rumble from Chatham came to RetroFest often to see all the vehicles.

But Saturday was his first time at the show, bringing his 1967 Chevy C-10 pickup truck equipped with a wheelchair lift so he could drive it.

Noting that the vehicle had already been retrofitted when he purchased it, Rumble said: “The cabin has been extended to accept the wheelchair lift.”

He said it was very different being on the show, adding that he had a great place.

Several people stopped to ask him questions about the vehicle.

RetroFest is organized by the Downtown Chatham BIA.

BIA’s Connie Beneteau was happy with how the return to an in-person event went.

“We couldn’t have asked for a better time this year,” she said. “It’s absolutely perfect and people came in droves.

“Everyone seems happy to be out again,” she added.

Saturday also marked the return of Miss RetroFest to the Kiwanis Bandshell stage at Tecumseh Park in Chatham.

Young-Tome got into retro about nine years ago when a photographer friend wanted to create a portfolio and asked him to do retro photos.

“It literally blossomed from there,” she said.

She added that Miss RetroFest is really the only pageant of its kind in the region, noting that she should travel to Quebec or Las Vegas to participate in other events.

“Nobody else does it locally, so it’s really unique, it’s really cool to be a part of it.”

Chatham’s “pageant girl” Melanie Renaud, who is the reigning Miss Galaxy Canada, has served as director of Miss RetroFest for the past two years.

“I really wanted to be a part of something that was happening during COVID and have that fun that RetroFest was still alive. . . so I came as the director of Miss RetroFest.

She said it was her first time leading a contest and it was a lot of fun.

Surprisingly, no one was killed in Belfast’s Europa, Europe’s most bombed hotel – The Irish Times