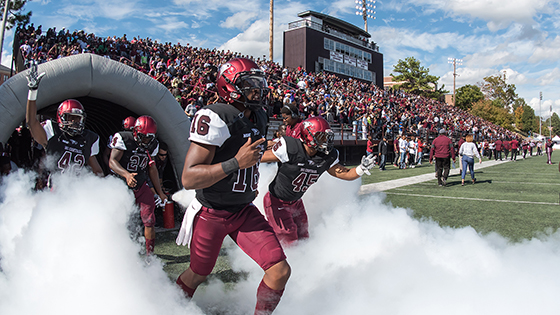 When The Triangle Tribune was born in 1998, one of our main goals was to give HBCU sports more coverage in the areas that were lacking.

In the spring of that year, the CIAA held its annual general meeting at a hotel directly across from our office. So, I decided to attend. After all, what better way to get to know the people you’re going to cover, right?

When I walked into the room and told the conference staff why I was there, they looked at me like I was a homeless person on the street begging for a piece of bread.
One staff member ran to tell another, then another. Finally, I was told that I could stay but that I couldn’t eat anything. The moment I found a back seat in the corner, I felt the whole room staring at me. It was obvious that they weren’t used to the media covering the event.

Many HBCUs during this time played second and third violins at predominantly white conferences, both by mainstream media and sports journalists.

The prestigious concerts were the Power Division I, NBA and NFL conferences. Too many journalists covering HBCU sports have seen it as a stepping stone to promotion to another pace. And reporters who really enjoyed covering HBCUs and didn’t look elsewhere were considered second class.

Even more disrespectful, some journalists did not even bother to inquire about the conferences or their history. I can’t tell you how many times I’ve sat at a table or in a press box next to a reporter who tried to pump me information so he could write his story.

But HBCU’s sports information services didn’t help matters back then either, especially at the Division II level. I had no idea that record keeping was so bad at some institutions until I asked a few sports news directors to help me with a series I wanted to write. They were all enthusiastic at first to give their school media coverage until I started asking for research material. Then they stopped returning my calls.

After a while, I understood the limits with which HBCU SIDs had to work, but I didn’t understand – and never will – why someone would throw away old media guides and then tell you that they don’t. can’t find the information you need.

But the tide began to change with the onset of the Great Recession in 2007, and the Internet is steadily gaining in popularity. Newspapers were forced to cut jobs and sports journalism, considered untouchable, was among the victims. Soon the demand far exceeded the supply of jobs for these major conferences.

Meanwhile, seasoned sports writers like Lut Williams (Black College Sports Page), Eric Moore (onnidan.com), John Dell (The Winston-Salem Journal), Herbert White (The Charlotte Post) and others “old” have gone on to serve an HBCU market thirsty for attention and respect. The arrival of Boxtorow.com and HBCU Gameday only served to upgrade the HBCU landscape.

Then click! The mainstream media, desperate to stop the financial drain, has finally emerged: the HBCU fan tailgate. HBCU fans travel. HBCU fans spend money. And let’s not even start the groups!

Now, HBCUs have become an assortment of sports journalists. More games are televised or streamed than ever before, and American companies are finally waking up in the sponsorship department.

Covering HBCU sports is so much fun. This helps support sensitive coaches who can’t stand criticism (especially from a woman), alumni who think black media should NEVER say anything negative about their school and even lack it. occasional respect from the institutions we cover makes it all worth it.

And, luckily, I can eat at the table now.

Bonitta Best is a sports writer for the Triangle Tribune in Durham.