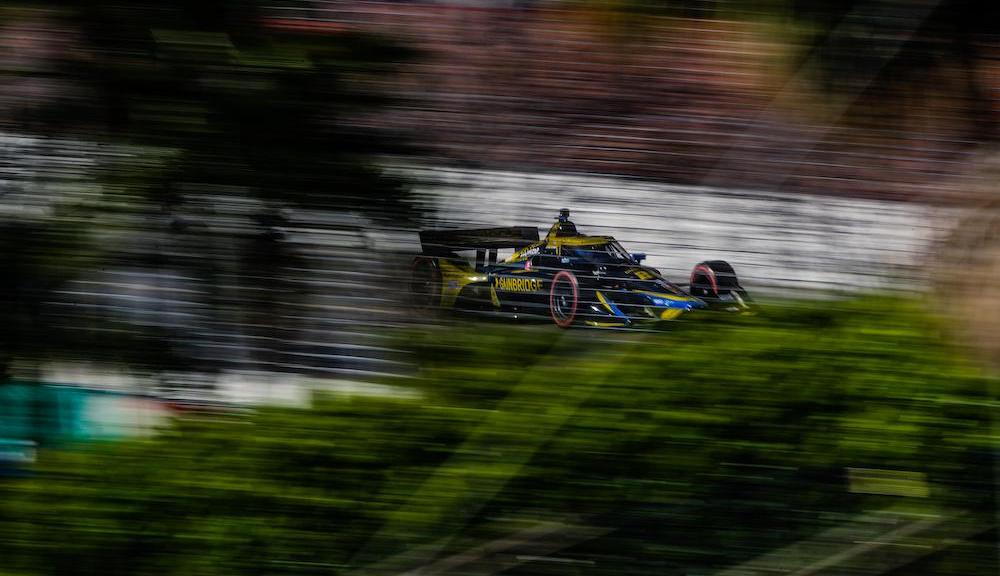 Four IndyCar drivers completed track testing with Dallara DW12s in a spec that simulates the weight and horsepower of IndyCar’s newly delayed 2024 hybrid engine. After testing, all four drivers came to the same conclusion: a new chassis is needed to carry the 2.4-litre twin-turbo V6s and Energy Recovery Systems (ERS).

The NTT IndyCar Series’ long-standing plan has been to extend the life of the DW12 by using it as the initial vessel for the hybrid powertrain. After pairing the hybrid powertrain with the old car to race for one or more years, IndyCar said a new, lighter chassis will replace the DW12 at some undetermined point in the future. It could be 2025, 2026 or later.

In most major vintage racing organizations, cars must be at least 10 years old in order to compete in historic events. This means that the new-for-2012 DW12, which has just entered its 11th season of use by IndyCar and will become a teenager if retained in 2024, is the only chassis currently qualified to compete in the modern racing championship for which it was designed and in vintage racing at the same time.

With the hybrid engine formula pushed back from 2023 to 2024, the delay with the 2.4-liter twin-turbo V6 engine and ERS package gave IndyCar and Dallara an unexpected gift of time – a free year – to field a next-gen car to complement the new powertrain and unveil the two in unison.

To date, IndyCar interest in accelerating a new chassis has been limited. Asked last weekend in St. Petersburg about the likelihood of using the hybrid carryover to order a Dallara DW24, the series seemed reluctant to deviate from its plans and pull the DW12 before the hybrids went live.

Going forward, the excessive and increasing weight of the chassis is the main concern and the main reason for calls to mothball the DW12 and replace it with something lighter and bespoke to complement the hybrid technology.

So far in tests where the weight of the 2023 car has been tested with the DW12, drivers have been massively disappointed with the product.

When complete, the ERS units made by MAHLE should add between 110 and 120 pounds to the rear of a car that is already much heavier than the designers of the DW12 expected. The most recent stages of the 2023 development process were completed last year with races performed at Indianapolis Motor Speedway by Meyer Shank Racing’s Helio Castroneves and Arrow McLaren SP’s Pato O’Ward, and at Mid- Ohio with Alex Palou of Chip Ganassi Racing and Team Penske. Joseph Newgarden.

In both tests, the Chevy and Honda powered teams installed 120 pounds of ballast behind the engines to replicate the estimated final weight of the ERS units. After factoring in the 60-pound addition to the front of cars that arrived in 2020 as IndyCar introduced its heavy-duty aeroscreen cockpit safety feature, older DW12s would be loaded with 180 pounds of extra mass to handle. in 2024. Filled with fuel, and with the pilots strapped in, the hybrid DW12s are expected to tip the scales past 2000 pounds, which, like the age of the chassis, would be another unflattering modern record.

IndyCar also asked Chevy and Honda to increase horsepower during testing to simulate the 800 to 900 hp expected to be produced by hybrid powertrains. At Mid-Ohio more than at IMS, the power boost gave Newgarden and Palou their first taste of how the higher weight, horsepower and speed affected handling, acceleration and braking. Based on the four test riders’ feedback on their time on the 2023-trimmed 2.5-mile IMS Grand Oval and the 2.3-mile Ohio road course, their honest opinions are worth beating. shared without interruption:

PATO O’WARD: “We have an opportunity coming in the next few years where IndyCar is on the rise, a lot of people are interested in it, and it’s time for a new car when a new engine comes out. All of these safety features we have added to this DW12 car are amazing the problem is that this car was not designed from the ground up with all these additions we need a car designed with all these new things and all the safety features in place from the start. It’s all just going to get better. I understand it’s going to cost a bit more, but I think in the long run it’s definitely the way to go.

“I don’t think adding more and more stuff to an already very heavy ‘Frankensteined’ car will do. And it’s just getting to the point where we’re not doing anything in the setup that helps you get rid of the plowing understeer in corners.The thing just doesn’t go where you want it to go.You can sway it somewhat at first, with very fast corners to get the thing turning as soon as you can , but in long quarters you can’t do that or you’re going to run into the wall.There’s a tough balance there.

“When we add so much more weight to the rear of the car, it’s going to oversaturate the tires beyond what they’re capable of. That’s the problem I see. We’re adding more power and weight, but we don’t have more tyres, the lightness would help us.

“As I said, I think it’s time for a new car. It’s time for a new era, with the hybrid engine, with a new car, which is created with the aeroscreen. Build a package that is built from the ground up together. You know, low, fat, fast and loud. That’s what we want.

HELIO CASTRONÈVES: “This car (DW12) has been there since 2012. They have done a great job, but in my opinion, if we want to do this new engine, we have to do it the right way.

The current chassis has been in active service since 2012, making it only eligible for current and vintage IndyCar racing. Eric Gilbert/Motorsport Pictures

“We put the new safety panels on the side, we put the new aeroscreen on it, and we did all those things. And then we add those 120 pounds, and maybe other things, which is a lot. But if we make this engine, let’s start fresh, start over with a new car, so that it can last another 10 years in the future. So my opinion on this is start well, do well, move to the new chassis.

JOSEF NEWGARDEN: “I love our current chassis, no doubt, but I’m definitely a fan of bringing in a new chassis sooner rather than later. So whenever that fits into the timeline, it’s not up to me, but I’m in the club asking for it ASAP.

“Based on my observations, the effort of driving the cars will only go up a notch and I’ve always been a fan of making the cars as hard to drive as possible. I always want a field where I can stand out from the competition, but you reach a point where you may be asking too much of the average person in the field.

“I think the physical demands are definitely starting to get to a point where it’s going to be very difficult to drive the cars with 120 pounds more weight on the chassis. I think from a tire perspective, Firestone can build a great tire and the more tire management that is demanded of the riders is only a good thing, the more we have to manage the tires the more the really skilled guys are going to enjoy it and have some separation.

“But from a performance point of view and just from a safety point of view, I think a lighter car will always be better for those two classifications. I think we are walking towards the future, we want more power. I love the idea of ​​the hybrid system and the link to road car technology, but we also have to find a way to keep the weight down.

ALEX PALOU: “It was Newgarden and me on the track, and when we first tested the new specification with more weight and more power, it was difficult to drive, because the car was super heavy and was not easy to stop. Especially in Mid-Ohio, which isn’t super easy on the brakes, but it’s not the hardest either. It was also physically tough. I remember we did three long runs consecutive and (after) we both finished. We talked after the last session and were like, ‘Man, I don’t know if we can drive this thing.’

“It’s not really fun to drive because as IndyCar drivers we want to be fast, and we feel like we’re fast in the corners, but putting on more weight makes the corners slower, so it’s not wasn’t great to drive. I don’t think we gained much by putting in more power. I didn’t like the way he was driving. The first few laps it was super lazy in the corners, and especially in Mid -Ohio, you have to connect corner to corner. It was pretty bad on the brakes and with a car with more power, it’s going to be really bad on the brakes and on our shoulders too. To be honest, we had need a new car. I think everyone feels that.

So far, the argument against releasing a new chassis alongside hybrid engines has centered on cost. In that regard, and to its credit, IndyCar has been clear in its mission to avoid stretching its teams’ bank accounts.

Conversely, the cost of updating each DW12 is expected to be significant, raising the question of why teams would be asked to invest six-figure sums in old cars to be replaced by new cars to be purchased. 12 to 24 months after the hybrid. the motors are running. Would keeping the DW12 instead of switching to a new chassis in 2024 end up being a waste of money for his teams?

When asked if they had a preference for Dallara to use a new chassis to go with the hybrid powertrain in 2024, or stick to staggered introductions and do a new chassis in 2025 or beyond, a few IndyCar team owners and crew chiefs gave us their unfiltered thoughts. And unlike the pilots, a unanimous opinion was not found.