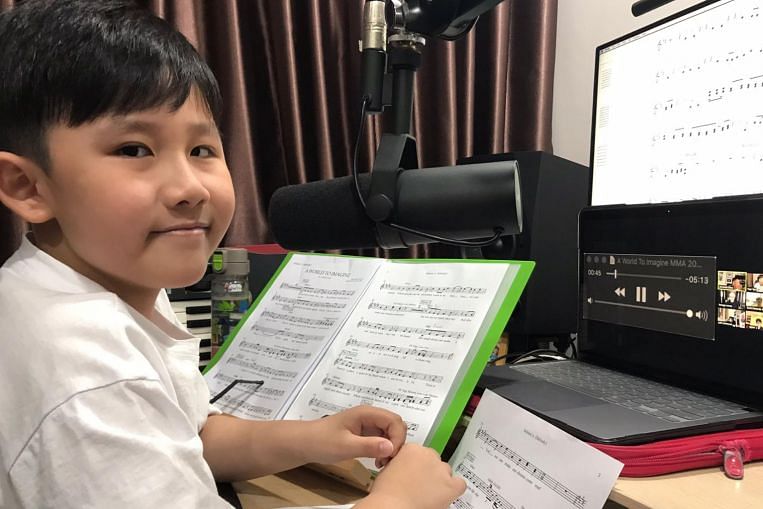 SINGAPORE – Due to pandemic-related measures, rehearsals for this year’s ChildAid concert had to take place mostly virtually via Zoom.

But that hasn’t quenched the enthusiasm of first-time performers like Raeanne Wong and Yogi Tan, who will perform at the annual charity concert hosted by The Business Times and The Straits Times.

The event, which went live last year, returns to the stage at Resorts World Sentosa (RWS) on December 9.

Nine-year-old Yogi told the Straits Times: “I feel excited and a little nervous, but I can’t wait to meet new friends who love to sing as much as I do.”

Along with three other boys, the elementary 3 student will perform Burnin ‘Up by the American pop trio Jonas Brothers.

The event is by invitation only and will be broadcast live to the public at home. This year’s theme, Virtuoso, is inspired by a desire to showcase the crÃ¨me de la crÃ¨me of talent.

In-person rehearsals will only take place over four days – November 29 to December 2 – instead of the usual seven to 10 days in pre-pandemic years.

Artistic director Jeremiah Choy, 59, says extra precautions were also taken to ensure the safety of the concert, as 40% of performers are under 12 and are not vaccinated.

While previous editions of ChildAid can accommodate up to 200 performers, Choy says current Covid-19 restrictions only allow a total of 50 crew and performers and around 500 in-person audiences.

â€œWe’ve had over 400 audition applications this year and it breaks our heart that we can’t include as many performers as possible, but everyone we have selected is at their peak,â€ said Choy.

“The kids who have done ChildAid three or four times are very professional, so their auditions are very good, but at the same time, we were keen to give newbies a chance.”

Among the new arrivals is Raeanne, a 16-year-old singing student at the School of the Arts in Singapore (Sota). She will perform Think Of Me, a song from the 1986 musical The Phantom Of The Opera.

â€œWhat’s interesting about The Phantom of the Opera is that it’s a musical that incorporates a lot of opera elements, that’s what I learn to do in school,â€ says -she.

The teenager adds that she was drawn to ChildAid’s philanthropic goals.

“My parents have always taught me the value of giving back and I can’t wait to see how the show turns out.”

Choy says of Raeanne and Yogi, â€œRaeanne is already very polite and I have absolute faith in her. Yogi was a little shy at first. The other three boys who play with him have already done ChildAid, but they are very welcoming and I think Yogi will fit in perfectly. “

ChildAid raises funds for the Business Times Budding Artists Fund and the Straits Times School Pocket Money Fund. The first supports the school allowance for children from low-income families and the second gives the opportunity to disadvantaged children and young people to develop their artistic talents.

The main sponsors of the event are UOB and MES and the platinum sponsors are Citibank and Toteboard. The site partner is Resorts World Sentosa. The creative partner of the concert is Orangedot Productions and the executive producer is Global Cultural Alliance. The official radio stations are Money 89.3, OneFM91.3 and Kiss92.

ChildAid 2021 can be streamed on December 9 from 7:30 p.m. on the Straits Times and Business Times Facebook pages and YouTube channels. To donate, visit the City of Good website.