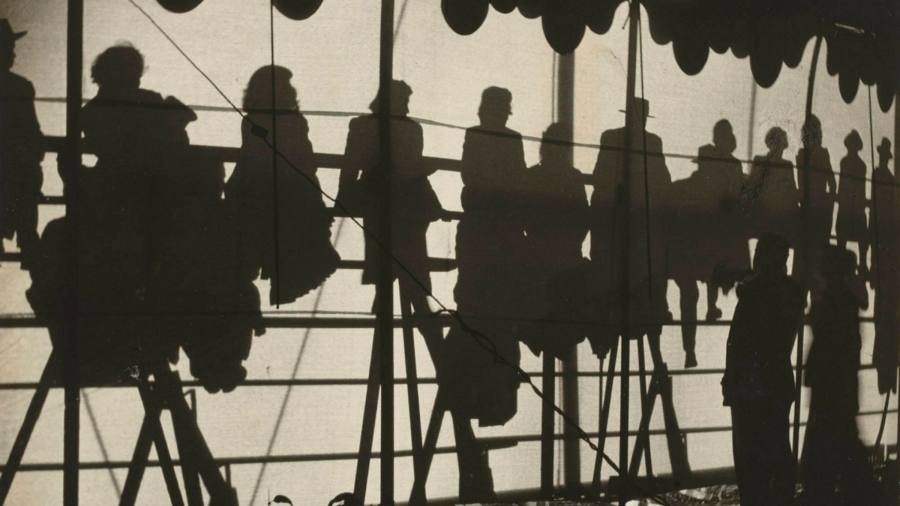 At night, outdoors. Through the walls of a glowing tent, we see the smoky silhouettes of figures seated on a grid of risers. They are witnessing some mysterious drama; we are outside the arena, watching them watch. From this perspective, audience members look like pitches on a musical staff, noting a ritual we can’t see or hear.

This photo, Julio Agostinelli’s “Circus” from 1951, is part of the Museum of Modern Art Fotoclubismo, an investigation into dark and shiny photographs of a group of Brazilian amateurs of the twentieth century. If you’ve never heard of SÃ£o Paulo’s Foto-Cine Clube Bandeirante, you’re in good company, with pretty much everyone outside of Brazil. Curator Sarah Meister deftly sifted through the club’s archives, and the resulting exposure subverts the comfortable cult of genealogical pros.

Meister concedes that putting on an exhibition of the work of doctors, lawyers, engineers and accountants who never took out their cameras until the weekend meant overcoming some deep-rooted conservation biases. Amateurs, she explains in the catalog, tend to be parochial and derivative, or mired in the clichÃ©. His comments suggest a tremor of apprehension. If museum curators and other referees open the portals of prestige, won’t today’s horde of instagramers, selfie-takers and vloggers come in? How does a curator keep control?

The Bandeirante Photography Club was founded in 1939, and while its members maintained high standards of technical and aesthetic mastery, they had little hope of international fame. It was reserved for European and American practitioners.

The new architecture offered smooth planes and sharp edges, as well as spiral staircases and shapes reminiscent of the thorns of sea creatures or coiled snakes.

Even more debilitating, the Bandeirantes grew together and functioned in sync. The arts establishment values â€‹â€‹originality, authorship and personal innovation, but the works of club members cannot be easily distinguished. The only individual who stands out is Meister, whose selectivity and taste in the exhibition shape the group’s collective impact.

As SÃ£o Paulo accelerated into modernity, the Bandeirantes found new ways to respond to it, often placing humans on austere architectural backdrops. In the 1951 German Lorca’s â€œApartamentosâ€ image of a brand new apartment complex, two boys are playing cards on the steps, baked by the sunlight. A dark door hangs behind them, and windows dot the white face of the building with black rectangles. The children interrupt the grid, humanize its mechanical regularity.

Lorca returned to the complex in 2018 and recreated the image with a few elders in place of the two young players. After more than six decades, the paint has peeled off and the steps are worn, but the biggest difference is how the occupants have flexed the facade with their own additions – a window grille, a set of louvered glass. – softening the spare geometries through the sloppier arrangements of daily life.

The club often sponsored field trips so that members could test their skills in unfamiliar territory. Both Ademar Manarini and Eduardo Salvatore took part in an outing to the newly built (but never completed) VÃ¡rzea do Carmo housing complex, a stylish working-class apartment complex designed by Attilio Correa Lima.

Two photographs, one by Manarini, the other by Salvatore, express the ambivalence of their authors vis-Ã -vis the flat slabs that protrude from the ground like massive tombstones. Salvatore shoots from a distance, placing a tiny human figure next to one of the concrete structures to indicate his epic scale. Manarini comes closer and fires from a crouched position, so that the man leaning against a wall in the foreground seems almost as tall as the building. The effect makes Manarini seem more aligned with the utopian goals of social housing, less suspicious of its potential to alienate the very people whose lives he aims to improve.

Like the New York School street photographers who worked those same years, the whole of SÃ£o Paulo harnessed the currents of city life. In New York City, this approach gave rise to jazzy, dark shots of chaos and drama. In Brazil, urbanity is inscribed as a set of formal abstractions, with the human body deployed to reduce industrial austerity.

On the whole, the Bandeirantes looked with affection on the new architecture. Smooth planes and sharp edges made it possible to merge clubism with cubism: many simply pointed their lenses at the repetitive matrix of the city. For more biomorphic abstractions, there were countless spiral staircases to capture, shapes that evoke the thorns of sea creatures or coiled snakes. Gertrudes Altschul, a German exile and one of the few women to climb the ranks of the group, relished concrete volutes that seem colossal and organic, like the terracotta sculptures of the following decades.

Some members were inspired by older neighborhoods in their city. “Light and Power” by Marcel GirÃ³ (1950) captures the chaotic filigree of the threads on which life depends. The effect is both industrial and crazy: the electricity meters in their identical gray cases line up like beaten soldiers. Above, cables twist and dance against a white wall. With gentle irony, GirÃ³ suggests that technological modernity is a fragile and tangled state.

MoMA and Meister have done us a huge service by unearthing the Bandeirante catalog. The story is not a static object or a scriptural text, but a collection of constantly evolving experiences. The show pays homage to freshly appreciated talents and a generation intoxicated with the magic of its moment. Most importantly, it recognizes the lofty (but widely disparaged) art of dilettantism.

As of September 26, moma.org