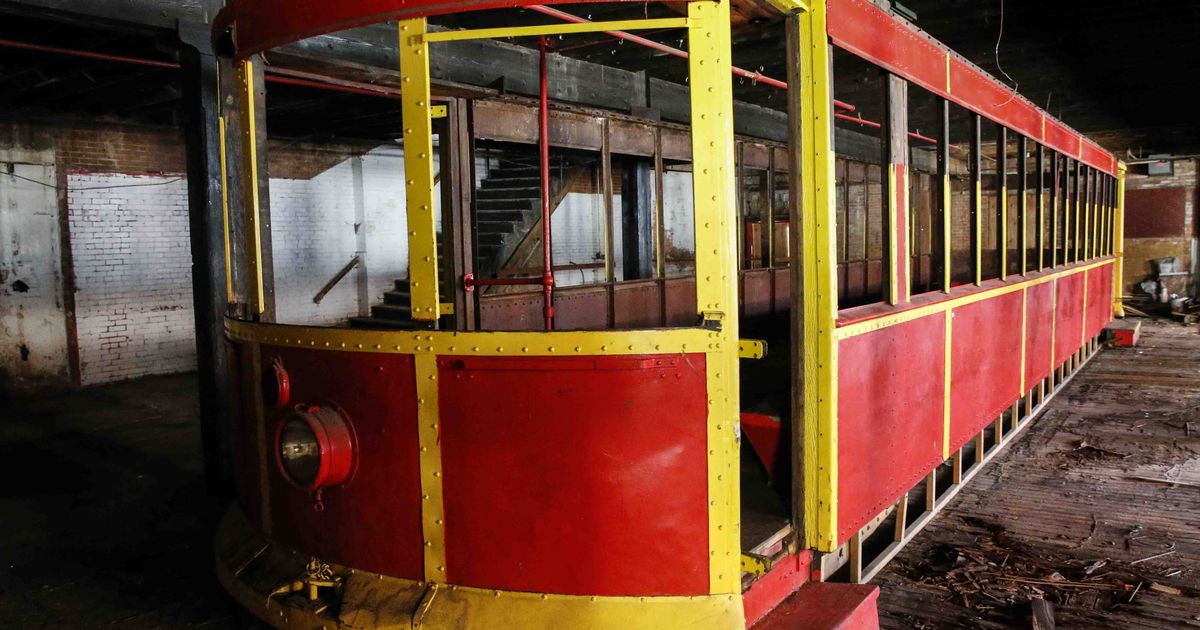 Old East Dallas’ historic 707 streetcar must be rescued from the predicament the size of a ship in a bottle that holds the steel icon hostage in the West End.

The Junius Heights neighborhood owes its creation even to early streetcars like the 707, and now three city council members with East Side ties have joined residents in trying to bring it home rather than see it cut and sold as scrap.

Although some regulars remember riding the 707 from downtown to east Dallas before the system closed in 1956, you’re more likely to have eaten a meal on this Junius Heights streetcar during the nearly 50 years of running Spaghetti Warehouse.

The family-style restaurant, which opened in 1972, was the first of the old West End warehouses to be gutted and reinvented in the northwest corner of the city centre.

Its vintage decor included brass bedboxes, antique arcade games, turn-of-the-century advertising — and the Junius Heights 707, saved from the scrapyard where it and the other streetcars were left to rot.

When curious diners marveled at the way the tram was squeezed into the restaurant, young employees claimed that the old building had in fact been built around the tram. In fact, Spaghetti Warehouse removed, then rebuilt, part of its rear wall to accommodate the installation of the car.

The 707 has been sitting there ever since.

After taking a look around the site of 1815 North Market St. on Wednesday, I can report that the cavernous building looks a lot more like the pillow factory it was in 1902 than the kitsch Italian restaurant where so many of us celebrated birthdays and school. excursions.

But in the back of the deserted two-story brick and wood structure, I found the carcass of the still glowing red and yellow 707 streetcar from Junius Heights.

After Spaghetti Warehouse closed in October 2019, all of his memorabilia were eventually auctioned off, including the tram. However, after a look at what removing the car would entail, the unidentified bidder thought better of the purchase.

After investor Robert Lavie, who owns several other properties in the West End, bought the former restaurant, he offered the tram to the Junius Heights neighborhood – on the condition that they pay to take it out of the building.

Laetitia Sherman, Lavie’s daughter who walked with me on Wednesday, said that with the pandemic waning, the family is eager to find the perfect tenant to help reinvent the space.

This means that Junius Heights must find a way out for the 707.

Longtime resident René Schmidt documented the importance of the streetcar in his October 2005 report which argued for the designation of the Junius Heights neighborhood as a historic district.

Dallas’ early 20th century streetcar system earned it the nickname “City on Wheels” and in 1906, as developers prepared to market Junius Heights, the Dallas Consolidated Electric Street Car Co. built a line in what was then a large area.

The Junius Heights Streetcar originally ran from downtown to Tremont Street, then continued on this route to Ridgeway Street; the line was later extended to the Lakewood Mall.

On the first day the streetcar ran, September 2, 1906, developers sold “the cheapest and highest class residential property in or near Dallas” and promised to refund fares to anyone who looked at the land while trying out the new transit service.

Because this opening fell on a Sunday, no real sales were possible. But many would-be buyers waited late into the night for a shot to be fired – the official signal that it was now Monday and the rush for the hottest lots could begin.

Each property was marked with a map on a stake; the buyers made their choice and rushed to find one of the eight sellers still on the premises. In one hour, half of the two hundred lots were sold; the rest was purchased the next day.

“It was such a huge event that it was billed as one of the Southwest’s record-breaking land rushes,” Schmidt told me. Thanks to the tramway, people could live “further east” from the city center while commuting to and from work.

By the 1930s, buses began to encroach on the streetcar’s dominance of Dallas transit, and Schmidt believes the Junius Heights 707 may be the only one to survive.

Built by the Peter Witt Streetcar Company, the 707 dates back to 1925 or 1926. Many Witt cars were gray with green accents, but Schmidt told me that one of his best sources thought this one was cream with accents. red accents.

No one I spoke to had any idea where the 707 resided between its decommissioning and its rescue by Spaghetti Warehouse. But after delighting so many customers inside the restaurant, the tram has to be saved a second time.

City Council members Paula Blackmon, Jesse Moreno and Paul Ridley formed an informal steering committee to help find a solution. Along with the Junius Heights Historic District, they will co-host a Rail Pioneers fundraising dinner at the Garden Café to kick off the fundraiser.

The Moreno District includes a small portion of Junius Heights and it represents many neighborhoods in Old East Dallas. Like his colleagues, he volunteers his time, outside of his official council role, to try to preserve this important piece of his constituents’ history.

Blackmon told me that the tram had a lot of sentimental value in his family because at the time, Spaghetti Warehouse was the rare Saturday night dinner spot for the kids. Like my own now adult sons, his eldest still has memories of the “trolley meal” as a cool novelty.

She is also thrilled to see communities coming together to promote a shared history.

Ridley, who represents both the West End and Junius Heights historic neighborhoods, told me that the preservation effort touches many neighborhoods because the streetcar was once the connection between East Dallas and downtown Dallas. town.

“It’s time to fix this” before redevelopment begins on the site, he said.

Several Junius Heights streetcar advocates have told me that opening up a wall for the streetcar exit will likely cost more than they can afford. Their feeling is that the massive frame will have to be meticulously taken apart to fit through the existing doorways.

The neighbors have already moved what they can. The beautifully preserved interior woodwork, windows, floor and roof boards of 707, and hundreds of other parts were removed, inventoried and stored.

Schmidt, former president of Junius Heights and still among the group’s leaders, and council members agree that the neighborhood will make the final decision on where the rebuilt streetcar will end.

One suggestion is to install it in the outdoor space of the neighborhood Garden Café so that it is accessible but also safe from vandalism.

Garden Café owner Mark Wooten joined the Junius Heights board in late 2021 and told me he would recuse himself from any vote on a location. But he can’t wait to see the streetcar in Old East Dallas again.

“These works are perfectly in line with our association’s mission to preserve the history of the district,” he said.

Schmidt sees even greater importance in the rescue mission.

“It’s the last of Dallas’ wonderful streetcar system,” he said. “It’s important to use it as a monument to where we’ve been and give the public a chance to reconnect with that history.”

For more information, including Monday’s Rail Pioneers dinner and how to donate to the rescue effort, go to gardencafe.net/streetcar.