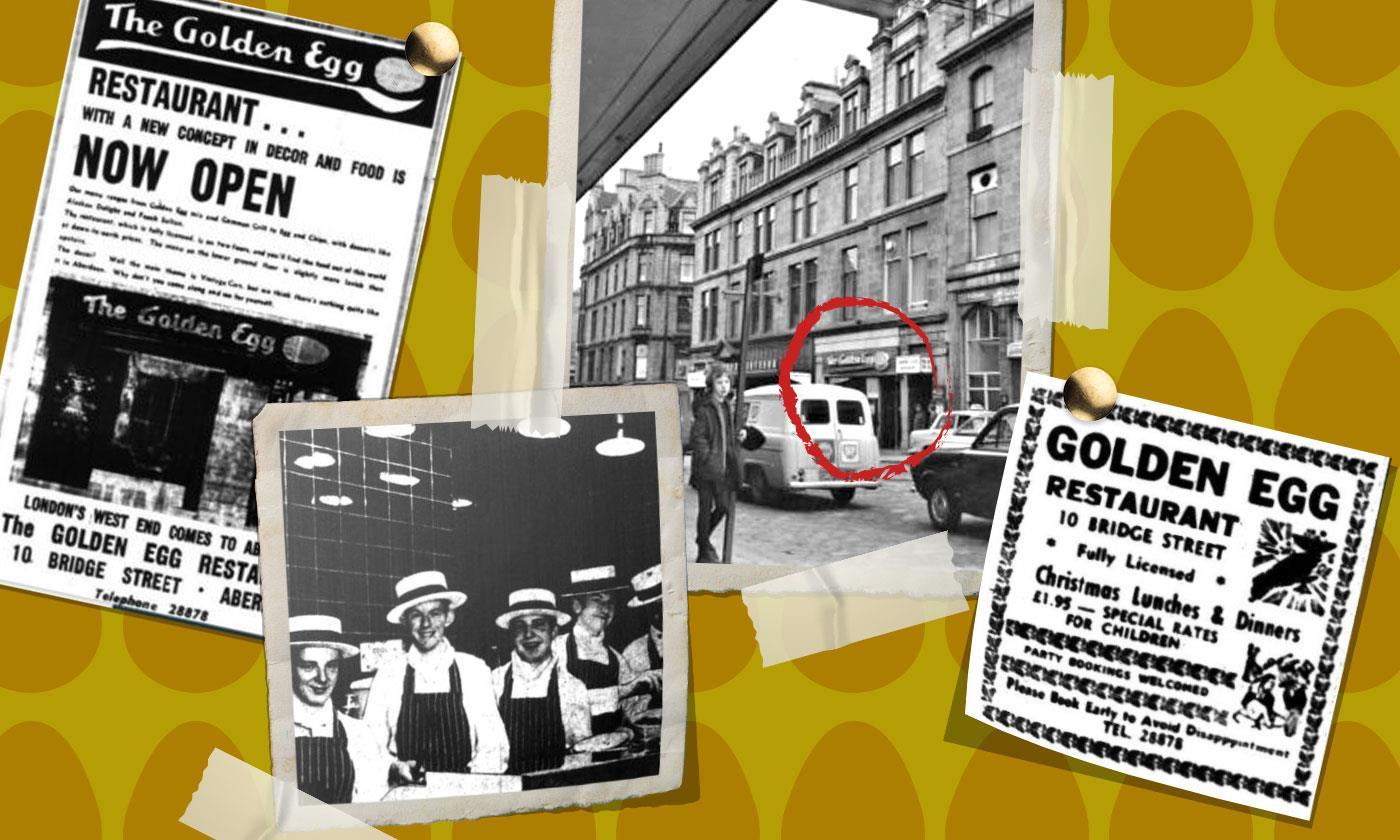 Do you remember the golden years of the Golden Egg restaurant in Aberdeen?

If you were walking down Bridge Street in Aberdeen in the late 1960s, you would be spoiled for choice for dining out.

Promising ‘a foodies paradise’ the latest addition, the Golden Egg restaurant brought a taste of London’s West End to downtown Aberdeen when it opened in 1967.

A reader who frequented the Golden Egg in his youth has come in touch, wondering if the Aberdeen Journals archives might help jog some memories of this once popular, but long since vanished restaurant.

Many Aberdonians will remember a night at the theater and a meal at the Golden Egg after we take a look back at the golden years of this Bridge Street institution.

What was the golden egg?

The Golden Egg brought a modern ‘new concept of decor and food’ to Aberdeen in the Swinging Sixties.

Popular in London, which had 30 branches, Granite City was the first restaurant of the Golden Egg franchise to open in Scotland.

Seeing the success of the restaurant in the south, two businessmen opened one at 10 Bridge Street in August 1967, now Richi’s Cafe.

It might be hard to imagine these days, but the now dilapidated Bridge Street was described as “the main street for dining out” in the 1960s.

Businessmen were asked if they felt intimidated by “the extreme competition” in the neighborhood, but they replied that “that doesn’t worry us in the slightest – we will come up with something quite different from any other restaurant in Aberdeen ”.

They were convinced that as a “product of the West End of London” the newer Golden Egg was “almost certain to gain ground in the North East”.

The Golden Egg claimed to be the most modern restaurant in Granite City, “providing the public with a wide range of good food and drink at competitive prices and in luxury and comfort.”

Seating 130 diners over two floors, the Golden Egg was a vibrant and cosmopolitan venue, offering quick, egg-rich snacks and full meals for foodies.

Its giant and innovative egg-shaped menus promised “extraordinary food at down to earth prices”.

Employing no less than 40 employees, they included “skateboarders in stylish striped aprons and waitresses in yellow coats” to ensure that all food was served piping hot in special pans.

And in 1967, the gourmet dishes on offer ranged from a fries called Golden Egg Mix and gammon grill, to the triumph of salmon and the good old egg and fries.

The puddings included the Jamaican longboat – a banana split with cream – for three shillings, an Alaskan dessert for two shillings, and Peach Sultan.

One of the specialties on the menu was roast prime rib with jacketed potatoes and Yorkshire pudding, while grilled meats and mixed steaks also proved popular.

It wasn’t just the kitchen that was different – the “insanely extravagant” decor was quirky as well.

Old-time diners may remember the unique interior design theme of vintage vehicles that graced the walls.

A special feature of the “fully carpeted” lower ground floor wall were huge replicas of cars seen in Aberdeen in the 1910s.

But the vintage theme didn’t carry over from the walls to the ceiling.

The polystyrene was installed in such a way that it created a “bright and decorative cart wheel design”.

And as if that weren’t enough to marvel, “the main feature” of the room was a “28-foot-long mural incorporating a styrofoam cogwheel pattern layered on plexiglass.”

Meanwhile, a colorful court jester figurine was ready to greet diners at the front of the restaurant, made from hardened polystyrene.

A mix of copper and brass lighting was used to create an ambient atmosphere to be invigorated with Italian-designed ceramic tiles that were ‘unusually arranged on banquet tables, blending antiquity with modern’.

What happened to the golden egg?

But the restaurant turned out to be a success, and by the 1970s there was a second branch in Aberdeen.

In 1970, the franchise was acquired by J Lyons, also owner of Wimpy International.

The Golden Egg has opened a second restaurant at 198 Union Street; these days it’s an empty unit in the 1960s development near the Music Hall.

In 1980, the four restaurants changed hands and it was around this time that the Union Street branch of the Golden Egg closed.

The following year, the tables and chairs of the old restaurant got an unexpected new lease of life – at the Roman Catholic Seminary in Deeside.

Furniture and other restaurant accessories helped create a new cafeteria at the newly renovated Blairs College.

But what happened to the Golden Egg on Bridge Street is a little less clear.

Although Aberdeen had oil, the UK entered a severe economic recession in 1980-81 and inflation and unemployment were high, it seems that was when the channel left many main streets.

True, in 1982 the premises at 10 Bridge Street in Aberdeen were now a gift shop, and in the mid-1980s it was joined by a Confectionery and Photo Factory.

JD Wetherspoon is probably the most comparable dining experience these days and can be found in most cities across the UK.

Are there any restaurants or bygone places in Aberdeen that you would like the Nostalgia team to review? Contact us at: [email protected]