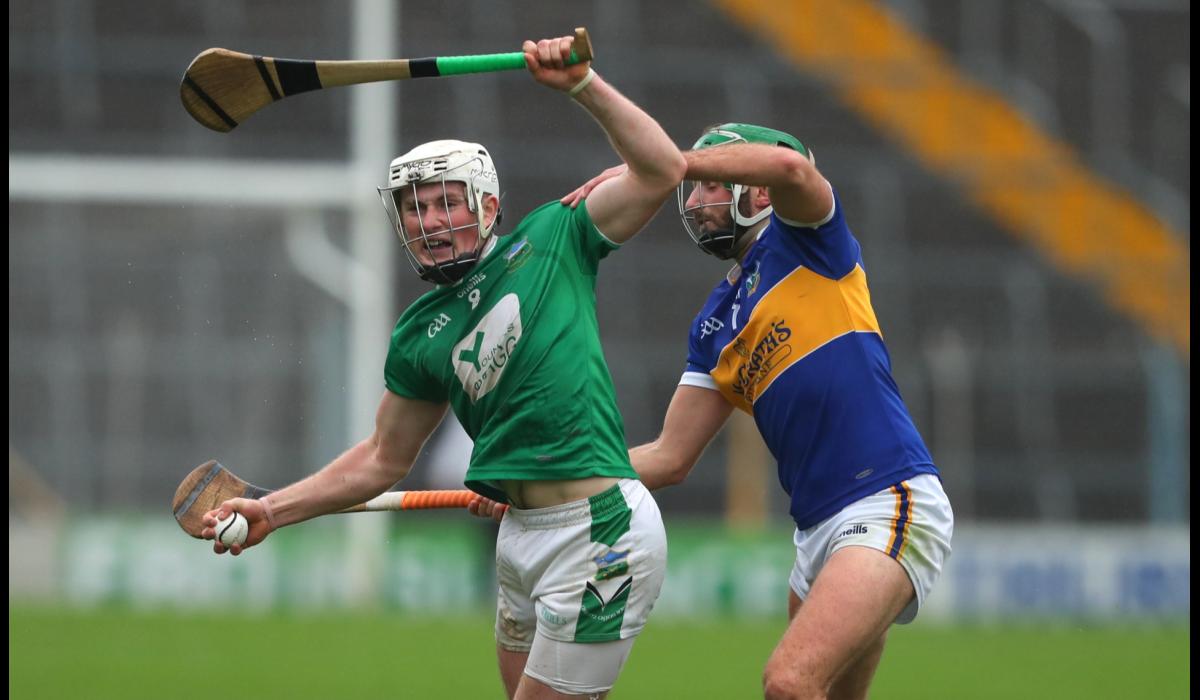 A final far north awaits after a rainy day at the stadium, Kilruane MacDonaghs and Kiladangan battled it out to the decider. Kiladangan will be expected to go the distance against a Kilruane club last seen at this stage of the Championship in the mid-eighties. It’s an unprecedented final pairing between the neighbours’ children.
Semi-finals difficult to call in advance finally gave sufficiently convincing winners. Upperchurch’s winning streak has hit the wall against a superior Kilruane across the board. Drom continued the fight against Kiladangan but they continued the match for too long and the final four point gap was probably a fair reflection of the balance of power here.
Weatherwise the opening fight had the worst. Continued rain and a troublesome, slightly diagonal wind created disorderly conditions which were reflected in the quality of the game. However, this affected Kilruane less as they were the better side from the start.
Upperchurch had the elements at their back in the first half, but they looked very uncertain from the start. All the positivity came from Kilruane attacking the game with more conviction, winning individual battles and generally looking like the most likely guys as this game unfolded.
The first major break came at twelve minutes when Upperchurch’s goal line survived an initial attack, with a fine save from Ciaran Shortt on Thomas Cleary. However, Kilruane persisted. Kian O’Kelly kept the ball in play and when he sent it back into the net, Jerome Cahill’s persistence paid off as he returned the keeper’s attempted clearance towards the net. The elders always advise never to throw the ball into your own square.
In the microcosm, this incident highlighted the difference between the sides. Upperchurch were a little heavier in their game while Kilruane drove everything.
To their credit, Upperchurch kept the battle going. Colm Ryan had a neat pair of runs then five minutes into the interval Jack Butler scored an invigorating goal as he ran unhindered to see his shot attempt blocked before pushing the ball past the line in the tracking. Kilruane will be concerned with how their defense split like the Red Sea.
The injury at the back, Jack Peters, may have been part of the problem.
By this stage the lead was down to just a point but Kilruane found the perfect answer before the break, with Jerome Cahill once again in the thick of the action. Cahill pointed, then set up Willie Cleary for a similar score before setting Cian Darcy for a raspy goal from the right corner.
If the Upperchurch keeper was at fault for the first goal he was helpless here and even though Jack Butler pulled a point back for the mid side their interval tally still showed a deficit of five, 2-9 to 1- 7, despite playing with the wind.
In truth, Upperchurch never seemed to recover in the second half. Stats will show they managed just two points into the second half, with their other flags coming from frees by Paudie Greene and Gavin Ryan.
By contrast, Kilruane scored six points from open play in that second period and they had a few more scoring chances. A point from Willie Cleary might as well have rattled the net and Kian O’Kelly fired one wide in the face of goal late on.
A six-point margin at the end was a decent reflection of the game. Upperchurch will regret a lackluster performance in their first-ever county semi-final. Jack Ryan was probably their best on a day that left them with a lot of regrets. They will feel like they didn’t bring their A game on Sunday, but maybe the opposition was a step up here from anything they’ve faced before.
They have little time, however, to dwell on the questions as Clonmel Commercials await them in Sunday’s football final.
For Kilruane, it was one of their most assertive displays in recent years. They brought energy and dynamism to the game on a day when Jerome Cahill was immense. Rarely has a man done so much to bring his team over the line. Liam Cahill, I’m sure, will have noticed.

Conditions improved for the second tie, which was the better of the two. It turned into an intriguing first-half contest with the teams swapping points, with a Johnny Ryan score for Drom leveling the scores after fifteen minutes, 0-5 apiece.
Seamie Callanan was in the lead for Drom, but after another exchange of scores, it was Kiladangan who put on the liveliest push heading into half-time. In fact, in the last ten minutes of the first half, the North team beat Drom 0-6 to 0-1. This small flurry of scores from a string of players took Kiladangan to a four-point lead per interval, 0-14 to 0-10.
The pace picked up immediately on the restart when Callanan somehow found space to score after Kiladangan struggled to clear his lines. Seamie followed with a free to level the counts soon after, but that would be the last time Drom was on good terms with his opponents.
Kiladangan retaliated with another purple patch to regain control and the game had that kind of pattern, the pendulum swinging back and forth, although Kiladangan overall had the best of business.
As the second half settled in, it was Kiladangan who struck forward again. From the 14th to the 22nd minute, the North team chained a necklace of points from Bryan McLoughney, two clearances from Alan Flynn from distance and Joe Gallagher to go up to five, the widest margin at any stage.
Thanks to Drom for refusing to wrap up and ensuring the match ended in a dramatic finale. At five o’clock in the morning, Drom suddenly found an oasis. Points from David Collins, a pair from Callanan of a free and a 65 and another from Tommy Nolan suddenly had the margin at one and the prospect of overtime dawning on people.
However, at the climax, Kiladangan found the perfect finish. Four more minutes and with Drom looking for a leveler, Eoin Collins lost the ball as he tried to get out and Dan O’Meara delivered the knockout blow.
O’Meara had hit the crossbar earlier and Collins had made some quality saves from Paul Flynn and Willie Connors, so the better side won in the end, although their supporters had some heart shaking in those latter moments.
It was an improved Kiladangan from previous games, with forwards particularly stepping up Bryan McLoughney, Sean Hayes and Joe Gallagher hitting three apiece from the game. Willie Connors was also busier and Dan O’Meara made an impact significant when introduced. They are well placed before the final.
Elsewhere, once again St Mary’s fell short in a county semi-final of the Premier Intermediate Championship. Saturday in Cashel, Gortnahoe had the advantage of organizing a promising final with Roscrea.
Speaking to a Clonmel man ahead of the game, he didn’t sound overly confident, notably expressing fear that his side would concede goals. His words proved prophetic. Three zeros on goal count was a critical stat, as the midfield’s biggest attacking punch won.
Two factors, I thought, were critical here to the outcome. Gortnahoe/Glengoole were physically stronger, winning the showdown. And then they had more aces on offense, where ‘Keano’ Hayes was exceptional and players like Darragh Maher, Ronan Teehan and Kevin Slattery delivered the crucial scores. Brian Maher also contributed with a pair of fine points from the back half.
Against that, Mary’s were more restricted in their scoring options, relying on Sean Kennedy from play and frees, with lesser contributions from Peter McGarry, Cathal Deely and Sammy Ryan, who hit two from the back wing. Ruairi Leahy scored one of the best points of the day when he came on. Tellingly, however, they rarely threatened a goal.
Seamus Kennedy was Mary’s exceptional player and, as often happens, they had to push him forward to try to save the game later. In the end, they just didn’t have enough in the pack against a better equipped Gortnahoe formation.
Let’s not forget that Gortnahoe won this title as recently as 2020, so they know the requirements. Mary’s finest hour was in 2017 when they overwhelmed Gortnahoe in the Intermediate Final at Golden. Recent history then between the clubs but on this occasion Gortnahoe were the undisputed masters.
The opening game in Cashel saw Kickhams thrashing Drom/Inch in the quarter-finals of the Intermediate Championship. After a well-balanced first quarter, two events tipped the balance in one direction.
Kickhams were leading by one point midway through the first half when Jamie Bergin scored a crucial goal for Drom to put them ahead for the first time. Then five minutes before the break, Kickhams showed Orrin Jones a red card for an off-the-ball incident.
The net effect was to see Drom pull out six at half-time and in truth Kickhams could never recover the situation afterwards. To their credit, they fought hard, with second-half goals from Walter Carroll and Ben Loughman keeping things close, but Drom deservedly earned a four-point win.