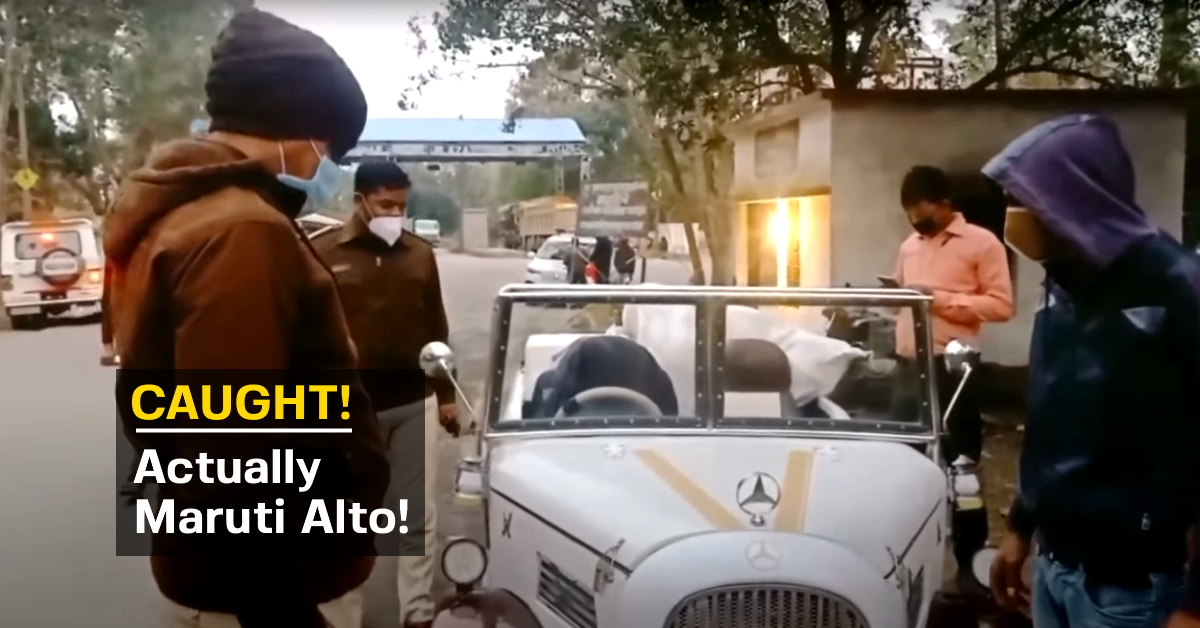 The use of vintage cars in wedding receptions and various other celebrations has seen a rise in recent times. Usually, these cars are rented from people who own them. While many use well-restored original cars from bygone eras, some people try to extensively customize a regular car to make it look like a collector’s car.

Cars falling under the second category are illegal to use on public roads and can be sanctioned by the police. One such car was recently pulled over by police as part of a normal patrol routine.

The entire video depicting this particular incident was uploaded by the YouTube channel of Bhagwat Prasad Pandey Daroga Ji, who happens to be a policeman.

During the usual routine, he spotted a rip-off of an open-top Mercedes-Benz car, which looked a bit dwarfed and unusual for a car from the German marque. While questioning the driver of this car, he learned that it was a heavily modified Maruti Alto, which was customized to make it look like a vintage car.

Although the modified vintage car here looks like a nice and honest attempt, it should be noted that it is illegal to drive such cars on public roads without permission from legal authorities. Under section 52(1) of the Motor Vehicles Act 1988 a person cannot make any alterations to the particulars of the vehicle stated in the certificate of registration. If he does so, he must inform the legal authorities of the changes made and also obtain the required changes in the registration certificate.

The police officer asked the driver to show the original documents and the authorization from the local RTO authorities to use this vehicle on public roads. However, the driver did not provide the required documents.

The policeman then amicably made it clear to the driver that these heavily modified vehicles are not allowed to be used on public roads without permission from the legal authorities.

The Supreme Court of India and the Motor Vehicle Act prohibit such modifications for driving on public roads. Such vehicles can be project cars for many and one can use them on private property like a race track or on a farm. However, the police can seize it on the public highway.

The car stopped by police is a two-door vintage car lookalike, with tapered fenders flowing down to the front grille, which bears a large three-pointed star logo. An additional logo is placed on the bonnet hood, with the car receiving rounded headlights, auxiliary lamps and turn signals mounted on the flared and curved front fenders.

The car’s two-piece windshield is nearly vertical, and the car gets two seats in the front and a small, flat bench seat in the back. The car also gets rounded chrome mirrors mounted on the edges of the windshield. In the back, the open-top modified vintage car has a curved trunk with a small trunk compartment and rounded taillights on the lower outer edges of the car.