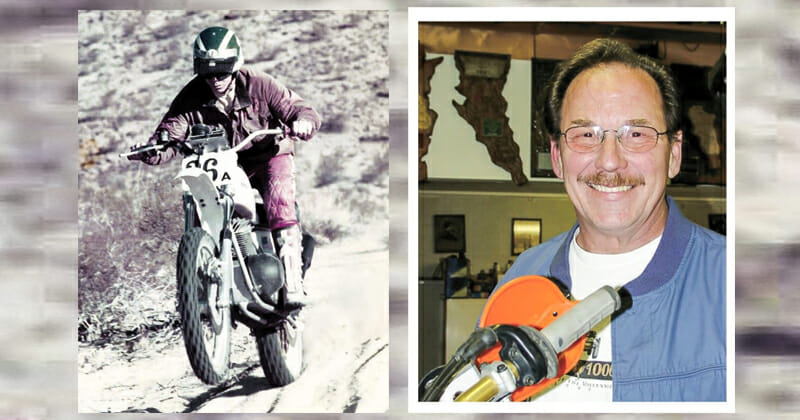 This Cycle news The Archives section is a reprint of the September 23, 2009 issue. NC has hundreds of past Archives columns of our files, too many of which are themselves archives. So to prevent this from happening, in the future we will go back to the past Archives articles while planning to keep new articles coming -Editor.

The Bishop of Baja

Something happened at the Baja 1000 last year [2008] it didn’t get much attention but was significant nonetheless. Motorcycle Hall of Famer Ron Bishop, the only motorcycle rider to compete in all 40 Baja 1000s, missed his very first race. It marked the end of one of the most impressive streaks in all of motorcycle racing.

“I had a team together,” Bishop explained. “And at the last minute, things fell apart. I had offers to ride with other teams, but it was so late in the game that I decided not to do anything.

In the mid-1970s, Bishop was also a two-time member of the US team in the International Six-Day Trials (ISDT, now called ISDE). Bishop was a factory off-road racer for Kawasaki and later Rokon.

Bishop was born in Woodland, Washington, in March 1943. His family moved to Southern California when he was 10 and settled in Escondido, a town in San Diego’s North County. The area was a dirt bike hotbed and most of Bishop’s friends had motorcycles. Bishop’s first ride was a Cushman Eagle scooter, which he naturally took off-road. He quickly transitioned from a scooter to a Mustang and eventually to what Bishop called his first real motorcycle – a Zundapp 250cc Super Saber.

“I used to race a TT every Friday night at Cajon Speedway in El Cajon,” Bishop recalled. “Then I would put some knobs on the bike and do some scrambling races this weekend.”

Bishop learned by watching some of the best runners in the San Diego area, such as Cal Rayborn and Ralph White. While Bishop loved the TT and scramble races, he found the wait between races to be excruciating.

“You would race, then sit for hours until you could race again,” Bishop recalled. But in enduros, hare scrambles and long-distance desert racing, Bishop has found his calling. In these events, there was no waiting, just hours of open racing.

Bishop competed in many of the major off-road races of his day. The Greenhorn Enduro, Barstow in Vegas, and grueling long-distance races such as the Mint 400 and Baja 1000. Bishop became one of the West Coast’s leading off-road racers, but he wanted to prove himself among the best in the country. In the early to mid-1970s, the opportunity to show off one’s skills outside of the West came in the form of ISDT qualifications held around the country. Bishop won a factory Kawasaki in 1973. It was a lavish life by the normally low standards of off-road racers. Bishop flew to races, stayed in nice hotels, and had mechanics tending to his motorcycles. Off-road racing legend Walt Axthelm was the team manager.

Bishop, who grew up on the harsh, dusty, wide-open trails of Southern California, learned to ride the tight trees, loamy dirt and often muddy conditions of East Coast races, making it the one of the most versatile off-. drivers of his time.

He qualified for the 1973 ISDT – which was the first time it was held in the United States – in the scenic Berkshire Mountains of western Massachusetts. Unfortunately, Bishop’s (and every other factory Kawasaki) had gearbox failures during international competition and he didn’t finish the race.

Even though his first ISDT outing was not a hit on the track, Bishop still thoroughly enjoyed the experience. He returned and qualified for the ISDT again in 1975, riding for the Rokon factory team. That year, the prestigious week-long event took place on the Isle of Man. Midway through that year’s race, Bishop suffered a serious accident and broke his ribs, once again, putting him out of the race. Nonetheless, Bishop later said that representing his country in two ISDT appearances was one of the most memorable episodes of his racing career.

Being a factory Rokon rider gave Bishop great insight into one of the most unique off-road race bikes in sport history. Rokons introduced automatic transmissions. Bishop remembers the special riding techniques that were needed to ride this unusual bike.

“The Rokon was coasting down the hills, so you had to go against its instincts and give it throttle to really control the rear end of the bike,” Bishop said. “He had a snowmobile-style ride. A good thing about it was that you couldn’t kill the engine. If you fell off the thing, it would just sit there and inactive. When going up hills, if the rear tire started to come loose, it would just go uphill until it stopped spinning. It was a great concept, but it probably weighed 60 pounds more than other bikes of that era, and that extra weight would weigh on you.

The Baja 1000 was first raced in 1967 and quickly became one of the best-known off-road races in the world. Over the years, Bishop became a racing legend for racing in every Baja 1000 from his debut in 1967 through the early 2000s. His best race result was overall runner-up in 1972 with his co-driver Don Bohannon. The two rode a highly modified Suzuki TM400.

“At the start of Baja, it was just you and a co-driver,” Bishops says, showing a photo of himself on a first run wearing a military canteen, black leather riding pants and riding boots. lineman. “The event has become so complex that in the 2001 race our team consisted of 37 crew members and 13 support vehicles, along with all GPS systems and high-end communications equipment. technology. It’s really something.

In the 2000s, the average race speed nearly doubled since when Bishop first raced in Baja in the 1960s.

Bishop has detailed the tricks your mind would play on you after 14 hours of cycling at night.

“You would start hallucinating with fatigue,” he said. “Cactus looked like it was moving, and you started hoping that the rocks, which started to look like houses, were the final checkpoint.”

During his off-road racing years, Bishop became something of a self-taught electrical engineer and began developing more powerful lighting for his motorcycles. He was the first to discover how to power halogen lights on his bikes. He earned such a reputation for his electrical and lighting systems that he worked for several factories over the years, providing them with bright, reliable lighting for high-speed races in the dark desert.

In the early 1980s, Bishop opened his own motorcycle shop, Ron Bishop Motorcycles, specializing exclusively in dirt bikes. At his shop, Bishop has worked with many of the top off-road and motocross riders in the greater San Diego area from the 1980s to the present. The walls of the shop are adorned with trophies, photographs and vintage motorcycle parts, perfectly representing 50 years of off-road racing history. It’s a place where off-road legends like Scot Harden, Tim Morton, Jimmy Lewis or Larry Roeseler could stop to fire the breeze. If you’re ever in the San Diego area and want to meet a living legend, you might want to visit. NC

Click here for all the latest Desert Racing news.