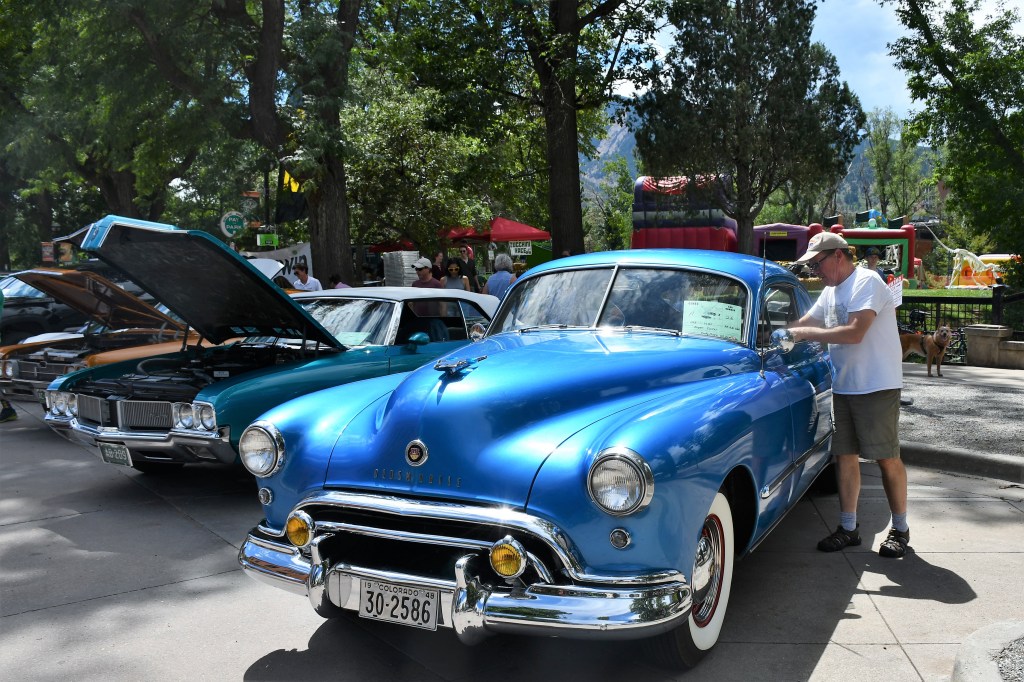 Tyrannosaurus rex came for the food and stayed for the music on the final day of the Boulder Creek Hometown Festival.

The anatomically correct prehistoric beast was designed and built by local puppeteer Tim Seeber, known to many as Mr. Bones, and he wandered around the festival engaging with the crowd, earning shouts of children and adults.

Attributing the smaller crowd to moving the event to a date before the traditional Labor Day weekend and to the weather, Denbow said storms on Saturday afternoon meant the festival closed around 4:30 p.m.

“It was a real pain to have to do that, so we don’t know what kind of audience we would have had last night,” Denbow said Sunday. “It has started to rain and we have to put safety first. But there were moments of magic throughout the weekend.

The vintage cars on display attracted young and old. Car enthusiasts and the curious looked out of the windows of restored cars and trucks and chatted with owners.

Roger Opfer, a Lafayette resident and car collector, brought his 1948 Oldsmobile 98 Club Classic to the show, a vibrant peach blue car, with meaty lines and chrome hubcaps. Opfer said the car’s low mileage was attributed to the original owner who contracted polio. Although the owner retrofitted the car so that he could continue to drive it, the progression of the disease forced the car to stand still for 20 years.

Sipping a beer from Wibby Brewing while musical duo Wrenn & Ian played in the bandshell, Caitlin Dunn and Eric Papin said the creekside festival was a chance to unwind after hiking the Shanahan Ridge Trail with their Murphy puppy.

“We saw the festival, found parking, heard good music and had a beer. It was easy,” Dunn said.

Four-year-old Enzo Botelho was playing with his first zucchini car in the shade with his father, Moreno, and mother Cibele Amaral. The family moved to Boulder from Brazil six months ago, and it was their first time at a festival along the creek.

“We love it, we have cycled here,” said Amaral. Her son loved old cars and his hands were covered in paint after decorating his car with zucchini.

Picking the perfect zucchini from a pile of squash meant continuing a tradition of zucchini racing for best friends Maddy Gaglio and Francesca Barradale.

“We’ve done this every year since we were six,” Gaglio said. “It’s our summer tradition, we have to do it.”

Scotsguard car collector continues to restore one car at a time