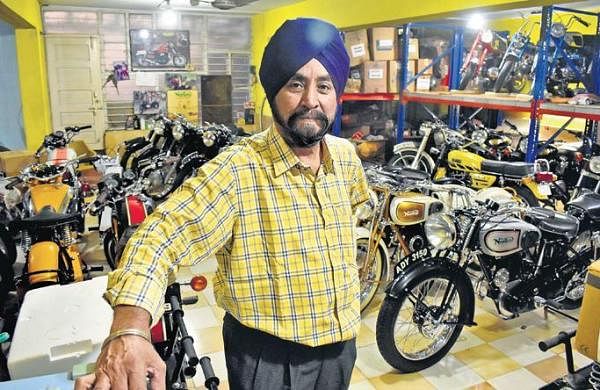 HYDERABAD: This story dates back to the 1960s. A 10-year-old boy, who receives 25 naya paisa as pocket money every day, saves it. He collects 150 Rs (600 coins of 25 naya paisa) in two years and, when he realizes that he has enough money, the boy runs to a junkyard to buy the motorcycle of his dreams, the Norton 16H. Although in a rusty condition, with dents all over its body (it survived WWII), he has it refurbished and restored to new condition.

This boy grew up to be a successful businessman, who owns a company called Shree Vishwakarma Mechanical & Engineering Works at MG Road in Secunderabad. It manufactures sand screening machines and other construction equipment.

We’re talking about Pappi Singh, who is in his sixties but still young at heart. Over the years, he has collected over 300 classic vintage motorcycles and a few dozen vintage cars. It also has a bulletproof Hindustan Motor Ambassador used by former Prime Minister PV Narasimha Rao, and a solar-powered Cadillac used by two Indian presidents.

“I stopped collecting now,” he sighs. “When I was young, I decided to collect 100. But with the grace of God, I reached 200; now the number has passed 300. If I continue to collect, the count will be endless, ”says Pappi Seth (as people affectionately call him). He owns over 40 Nortons to date. “I am in European motorcycle manufacturers and have collected BSA, Ariels, Lambrettas, Vespas, Furys and more. My favorite is the Norton Manx, ”he says.

The oldest motorcycle in Pappi’s collection dates from the 1890s – a BSA. “The Nortons are my favorite machines. In fact, I named my youngest son Norton Singh, ”explains the self-taught mechanic, welder and painter. He is so possessive of his collection that he has built a closed laboratory to paint cars. “I hate the painters outside, they ruin the vehicle.

They spoil the shine, ”he says, frowning as he walks into the basement of his store, which houses more than 70 vintage cars that glisten with tungsten, steel and iron. Each vehicle looks like it was shined for display in an exhibition. “Oh! You must see how possessive I am towards my machines. I don’t take them out in the rain, I don’t take them out even when it’s not raining. You know, our roads are always so dusty,” Pappi explains. , adding that he places a mirror under a car after it has been washed to make sure it is perfectly clean underneath.

“I have a dedicated person to shine and polish my vehicles every day, even when not in use,” he says. Pointing to the boxes that were the only dull objects in the room, he said, “These are all the spare parts I collected 40 years ago across the country, when I saw vintage engines go missing.” . I used to go to every repair or hardware store and buy all the spare parts in case I needed them in the future. I rarely have to look for spare parts outside. Either I have them in these boxes or I make them myself. Pappi wants to create a museum to present the collection of his life. In fact, he had a plan in place, but someone duped him. He hopes to see this dream come true.