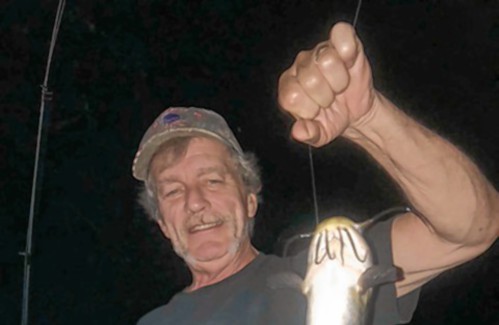 Earlier this week my siblings Chris Roche and Maureen Riendeau decided to go back and go pouting. Memories of night pouting include my dad coming home with a mess of the tasty member of the catfish family with his friend, Ed Donnelly, and the feast that followed. Sometimes the fish was rolled in flour and cooked in oil that night and other times it pouted at breakfast.

In my teens, we often packed our gear, usually power lines, and went to Quabbin Gate 31 to pout. Some of you may remember power lines: a special rig consisting of a braided line and a long elastic band (5 to 10 feet). You usually use a terminal swivel on the braided line to attach two long shank hooks (the pout has three thorns you need to avoid) and we would bring an old sock. You put a rock (softball size or larger) in the sock and throw it as far as you can, making sure you’ve secured the end of the line. You can then pull the line to bait the hook as the band stretches out, then release it to what you hoped was a good spot.

When you saw the line move, you pouted (or two!), Then were able to reboot and return to the hot spot. If nothing bit, you would come in and throw in another spot. When you strike correctly, you’ll bring home a bucket of “growling” brown bullheads, the species’ real name, to clean up.

This cleansing in itself is a story in itself. Avoiding getting stung by the back and side spines is a big deal. It hurts like hell! Once you got the knack, skinning the pout was quick and easy and the white flesh is, in my opinion, as good to eat fish as we find it to be. The “old guys” would amaze me by using just a pair of pliers to pout and do it in seconds! They were delicious and a night of pouting with your Coleman lantern, good friends and maybe a refreshing drink or two was nice, even with an occasional mosquito bite.

You don’t need a power line and you might have a hard time finding the materials today. A pair of rods baited with nightcrawlers will do. Some, like my brother Chris, “sweeten the pot” by throwing in a punctured can of cat food a few hours before fishing and the results usually reflect the great sense of smell that brings a pout to the baited area. Once you find the horn pout, you usually grab a bunch of it. If I remember correctly, there were a few locals – Gerry Vladyka is one that comes to mind – who frequently caught horn pot on a boat in Quabbin during the day using walking sticks. fly. It doesn’t matter how you catch them; they taste good!

Brown bullhead (taxonomically, Ameiurus nebulosus) can live in cloudy, oxygen-poor water and can breathe through its skin. The hornput is native to New England and one of the most common and widespread fish in the region. The hornpout is a catfish that stretches from near Hudson Bay in the north to the Gulf of Mexico in the south and from the Atlantic coast west in the middle part of the nation. It is found at the bottom of most lakes, ponds, and slow-moving streams. It comes out at night to feed. Hornpout finds prey by taste-smell using their hypersensitive barbs, or “whiskers.”

Small pouts are food for other fish. Adults have few predators, thanks to the three poisonous spines on their pectoral and dorsal fins. When deployed, the thorns can cause serious damage, as any fisherman who treats the hornpout with neglect can attest. They can live in warm, oxygen-poor waters where other species can’t, and they can even absorb oxygen through the skin if needed. Brown bullheads are considered the most devoted parents in the fish world. Both parents keep their eggs and fry after they hatch and “collect” them.

This writer was invited to the fishing trip but had a prior commitment. A new “toy” had arrived and I was busy putting together the Decked drawer system for the rear of the Silverado. It’s well built and sturdy and has a ton of gear, including guns, ammo, dog food, hunting vests, gloves, boots, and other items crammed into the cabin. It’s a foot tall and my wife is worried about my ability to haul trash and future furniture purchases. We may need to pay for the delivery.

Mike Roche is a retired teacher who has been involved in conservation and wildlife issues his entire life. He has written Sportsman’s Corner since 1984 and served as a Mahar Fish’N Game Club Advisor, Massachusetts Conservation Camp Advisor and Director, was a Massachusetts Hunter Education instructor for over 40 years, and is a licensed New York Hunting Guide. . . He can be contacted at [email protected]

The postcard arrives 53 years late; Rossmoor native sees it as a love letter from beyond – Orange County Register