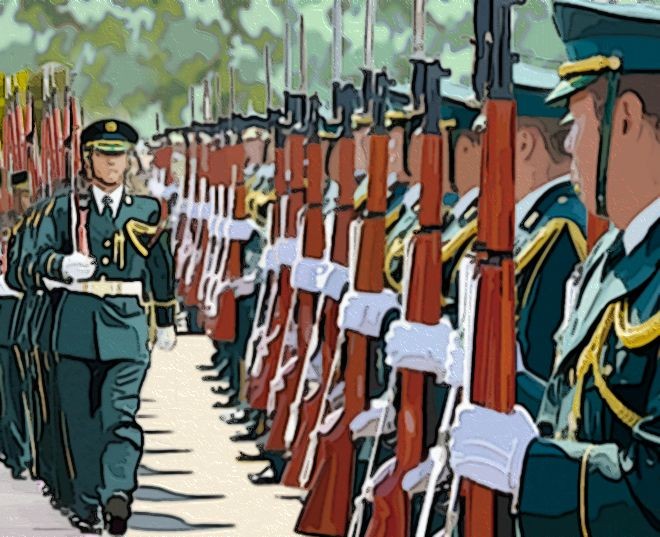 I like when the
the old hands
in the air
–Jerome Berglund (Minneapolis, Minnesota)

The haikuist dedicated this haiku to the memory of James Joyce, who wrote “Ulysses”, a long story about the events of June 16, 1904, experienced by a man walking the streets of Dublin. O’Morain likes to stroll. He described reaching a haiku-like moment of euphoria on his website, “on a sunny afternoon in Dublin in the 1980s…I abandoned my desk in The Irish Times – not an unusual occurrence – and I went for a walk in the grounds of Trinity College… and watched the cricket match – a game I might add I knew nothing about I felt wonderful practicing my mindfulness I was filled with the deepest sense of peace and happiness I have ever experienced.I have never forgotten the experience.

Tsanka Shishkova spent the day walking in the woods with a best friend.

Sean Erin McMurray was dragged through the streets of Brossard, Quebec by his new dog, Mickey.

Nose to the sidewalk
covered in pink petals,
the beagle leads

footprints
stages of a journey
multiply

It turned out that CX Turner wasn’t walking alone in Birmingham, England.

i find your eyes
among the blue
wild geranium

distant mom–
shades of green
in the valley

Grass growing…
ask why and why
little girl

In an essay titled “Haiku” published in 1893, sharing his vain thoughts on literature, Masaoka Shiki suggested that European-style poems about complicated and confusing human affairs require many words to explain. For example, Junko Saeki originally submitted this lengthy haiku, admitting “I was wordy in my haiku, so I could fully express its context.” Soldiers who returned from the Pacific War (1941-1945) neither openly mourned nor shared their wartime experiences – therefore, “their war continues internally”.

lucky blackbirds, still at peace with themselves
former soldiers of the imperial army finally forced to
break their long silence on their wars

Saeki was able to shorten his poem as follows:

Kanematsu is a conscious grandfather. Isabella Kramer works in healthcare in Nienhagen, Germany.

spring sunshine…
the little neighbor is talking
to her invisible friend

Rose Menyon Heflin attempted to explain a complex pattern of human migration in Madison, Wisconsin. Christina Chin praised the way people get around in Sarawak, Borneo.

Sheila Barksdale spoke of “the folly of smothering ancient water meadows by building unsuitable houses or agricultural projects”. She rallied against the ugly physical barriers on the banks of the Severn to the west of her home in Gotherington, England, which “local politicians have to pledge huge sums of money to engineer”.

broken bridge
the megaphone promise
not broken yet

Boianova invoked the activism of Nicholas Roerich (1874-1947), a Russian devoted to the cause of preserving art and architecture in times of war.

paintings by roerich
nature, people and God
in the unit

While spreading the mold from his favorite Agatha Christie novel, Kanematsu couldn’t help but think of the devastated village of Andrivka west of Kyiv, Ukraine.

pungent smell
And then there was no more
bombing raid

Writing from Kyiv, Ukraine, Shpychenko lets readers know that many of his compatriots have lost their homes and addresses.

Miera Rao, a writer from Northern California, notes that she “used to collect stamps as a child and was an avid writer.”

While eagerly watching the children color, Kanematsu felt the full brunt of the war in Ukraine. Mario Massimo Zontini couldn’t believe what he was reading on the news in Parma, Italy.

Poignant spring…
children draw smiles on the suns
not knowing

at the top
from the tallest flagpole–
bird poo

Teiichi Suzuki learned from the UN refugee agency that more than 6 million people have left Ukraine since the invasion and another 8 million have been displaced within their own country. They lost everything, including the spring. TD Ginting worried whether newborn babies would ever find a safe place to sleep, at home or abroad.

The displaced
seize in the spring
burned trees in Kyiv

babies born in war…
the cries for
the (p)neighboring inhabitants

spring sun smiles
nothing worse for fools
to satiety

The Silesian haiku Horst Ludwig paid homage to this religious poem by Johannes Scheffler (1624-1677): Stop. Where are you running? Heaven is within you. If you seek God elsewhere, you will miss him again and again.

In the vague morning
Angelus Silesius
Where are you running?

Ram Chandran, a corporate lawyer in Madurai, India, has heard an answer to his prayers.

in the deep woods
I scream ‘oh my god’
all the green echo ‘yes, yes’

Writing from Bucharest, Romania, Florin Golban dabbled in the poetic technique of simile: drawing / on the steamy train window / feeling like a stowaway. This version of 5-7-5 syllables is more imaginative:

Hla Yin Mon was hoping to have a shared experience in Yangon, Myanmar.

Lilia Rachelva said that although spring has arrived in Rousse, Bulgaria, she continues to pray for the end of the war in Ukraine. Mirela Brailean discovered a truism in Iasi, Romania.

spring flowers
a thousand more hopes
in the sky

spring again
more beautiful
as i get older

Melanie Vance has lost her echo in Dallas. Golban tapped into his passion for rock music to play another day. Marilyn Ward looked for a lyric sheet in Scunthorpe, England.

mountain valley…
I lost my voice because of the
swirling winds

Writing from Cordoba, Argentina, Julia Guzman reminisces a tango and ballad from the 1996 musical, “Evita.”

Berglund didn’t know how to react to a sound from the next unit.

meowing cat
next door, I’ll feed you
if i was able

Shiki added this question to his 1893 essay on Vain Thoughts on Literature: “I wonder…whether works of lofty thought and lofty spirit can only sprout from the struggle of existence and survival of the fittest. Looking at row upon long row of seedlings in Osaka, Hidehito Yasui reflected on the lines forming in the muddy waters of war. Yasir Farooq was contemplating his end in Karachi, Pakistan. Writing from Bangkok, Marek Kozubek wonders what will grow after the war.

thinking meadows…
there grows the green
on my grave

after the war–
clover green
on their graves

gentle rain
the tea infuses
on the hottest

Read haiku by fireflies at http://www.asahi.com/ajw/special/haiku/. The next issue of the Asahi Haikuist Network will appear on June 17. Readers are invited to send haiku on a long day (to celebrate Bloomsday or the summer solstice), on a postcard to David McMurray at Kagoshima International University, Sakanoue 8-34 -1, Kagoshima, 891- 0197, Japan, or by e-mail to [email protected]

David McMurray has been writing the Asahi Haikuist Network column since April 1995, first for Asahi Evening News. He is a member of the editorial board of Red Moon Anthology of English-Language Haiku, a columnist for the Haiku International Association, and editor of Teaching Assistance, a column in The Language Teacher of the Japan Association for Language Teaching (JALT).

McMurray is a professor of cross-cultural studies at Kagoshima International University where he lectures on international haiku. At the Doctoral School, he supervises students doing research on haiku. He is a corresponding school teacher of haiku in English for the Asahi Cultural Center in Tokyo.