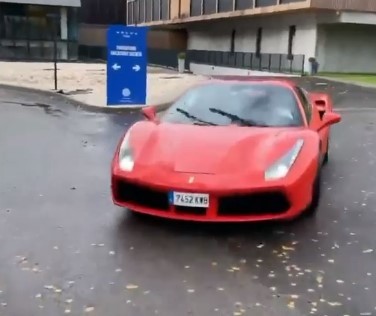 Chilean professional footballer Arturo Vidal is part of the Inter Milan squad, having played for Barcelona, â€‹â€‹Juventus and Bayern Munchen. The Chilean player has a fun history with cars, and one of them includes the one in question, the Ferrari 488 GTB.

A few weeks ago, a late summer video leaked showing Vidal too drunk to get in his supercar. The footballer tried to get on a bicycle parked near his Italian car, but failed to get into the car, ended up on it with his feet in the air.

Now Arturo Vidal has shared a new video on social media, where his former colleague, Ivan Valenzuela, drove his Ferrari 488 GTB and asked him to walk him home. Valenzuela also shared an Instagram story as he drove the supercar through the rain in Como, Italy.

But the supercar isn’t the only vehicle Vidal is passionate about. The Chilean player is very attached to a very surprising car, a Fiat Panda, and he becomes moved every time he shows it on social networks. A few weeks ago, the soccer player drove him to practice and also shared a series of photos as he hugged the car, towering over the small vintage vehicle.

With a Mercedes-AMG G 63 in his garage, you could say that Arturo Vidal has the most inconsistent collection to date. But he loves them all.