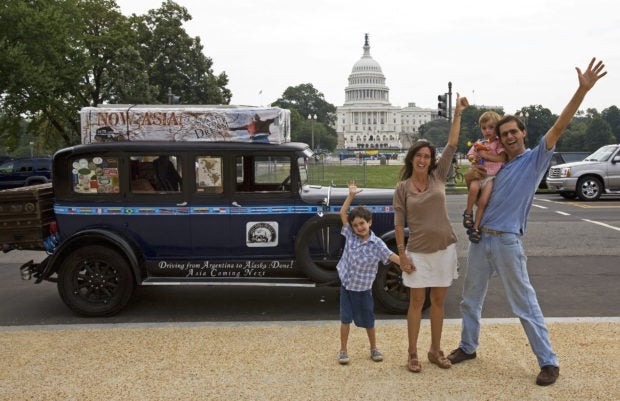 This file photo taken July 19, 2007 shows Candelaria (L) and Herman Zapp (2-R), and their children Pampa (2-L) and Tehue (R), standing next to their 1928 Graham-Page automobile near the United States. Capitol in Washington DC. The family plans to complete a 22-year trip around the world on March 13, 2022, which began on January 23, 2000 in Republica Square in Buenos Aires. (Paul J. RICHARDS / AFP)

GUALEGUAYCHU, Argentina – An Argentinian family is about to complete the journey of a lifetime: they traveled five continents in a 1928 clunker in an adventure that began in 2000, while giving birth to and raising four children who are now teenagers.

The Zapp family – Herman and Candelaria and these children – have traveled a total of 362,000 kilometers (225,000 miles) and have now stopped in this town on the border with Uruguay before their scheduled arrival on Sunday where they started on the 25 January 2000 at the Obelisk, a landmark in downtown Buenos Aires.

“I have very mixed feelings. We’re ending a dream, or realizing a dream,” Herman told AFP. “What will happen now?” Thousands of changes, thousands of options,” said the 53-year-old, who is already thinking of sailing around the world.

Candelaria, who was 29 when the trip began and is now 51, said her biggest and best discovery was the people she met along the way.

“The people are wonderful. Humanity is amazing,” Candelaria said.

She said the family had visited no less than 102 countries, although they sometimes had to take detours due to wars or other types of conflict.

The couple had been married for six years, had good jobs and had just built a house, with the intention of having children too, when the urge to travel arose. Their journey around the world began with a backpacking trip to Alaska.

And somebody gave them a car, a 1928 model from an American brand called Graham-Paige. The engine was bad and the paint looked horrible. “It wouldn’t even start,” Candelaria Zapp said.

“The seats aren’t great, nor is the muffler. There’s no air conditioning either. It’s a car to keep an eye on. It doesn’t look comfortable, but it was wonderful,” Herman said. 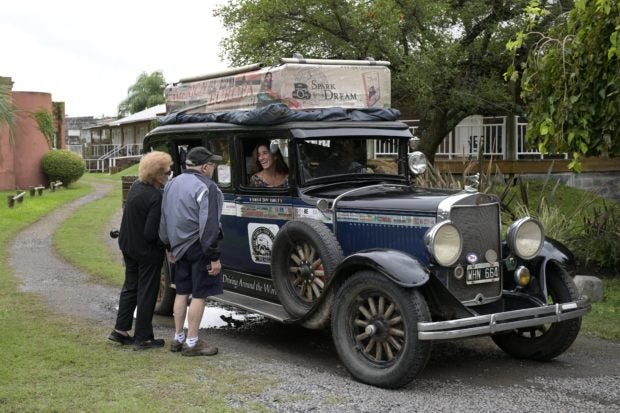 A couple talk to the Argentinian Zapp family as they stay in their car, a 1928 Graham-Paige, as the family dog ​​rests, near Gaualeguaychu, Entre Rios province, Argentina, March 10, 2022 The family expects to wrap up on Sunday a 22 year trip around the world that began on January 23, 2000 at Plaza de la Republica in Buenos Aires. (JUAN MABROMATA / AFP)

“It was good in the cities, in the mud and on the sand,” he added.

They’ve only used eight sets of tires in 22 years and only needed major engine work twice.

Herman shows off the roadster by opening a canvas on top that forms a kind of tent for children to sleep under when it’s time to camp.

“It looks better now than when it first came out,” he said of the modified ultra-vintage vehicle.

While on the road, and with the first two children born – Pampa, now 19, was born in the United States and Tehue, 16, on a visit to Argentina – they grew the car by cutting it in half and adding 40 cm (16 inches) in length and another seat.

That made way for Paloma, now 14 and born in Canada, and Wallaby, 12, to Australia.

The latest additions to the family were a dog named Timon and a cat named Hakuna during a stay in Brazil, where the Zapps were stranded for some time in 2020 due to Covid-19.

More on this car, which looks like something out of a gangster movie: the trunk acts as kitchen storage, and the heat from the engine is used for cooking or heating water. Clothes and tools are stored under the seats. And for all those years, it was home sweet home.

“It’s a small house but with a huge garden, with beaches, mountains and lakes. If you don’t like the view, you can change it,” Herman joked.

On the side of the car is a sign that reads “A family traveling around the world”.

The Zapps usually stayed as guests in people’s homes – they estimate there are around 2,000 in total.

“The humanity is amazing,” Candelaria said of people’s hospitality. “Many helped just to be part of a dream.”

But it wasn’t all easy. Herman has already caught malaria, the family traveled through Asia during the bird flu epidemic and had to deal with Ebola in Africa and dengue fever in Central America.

Here on the streets of Gualeguaychu, people honk their horns when they see old Graham-Paige from the Zapps. Classic car enthusiasts have their picture taken with it.

And some are buying a copy of the book the Zapps wrote about their adventure, called “Catching a Dream.” They have sold around 100,000 copies and say this is their main source of income for all those trips.

For the record, they did the Americas, Africa, Oceania, Asia and Europe.

They touched Mount Everest, ate duck eggs in Asia, danced with natives in Namibia, entered the tomb of King Tut in Egypt and crossed many seas.

For the children, it was an unforgettable experience. They did their studies remotely and in home learning with Candelaria.

“What I want most is to make lots of friends,” said Paloma, the 14-year-old.

Bray’s St. Patrick’s Day Festival is back in March