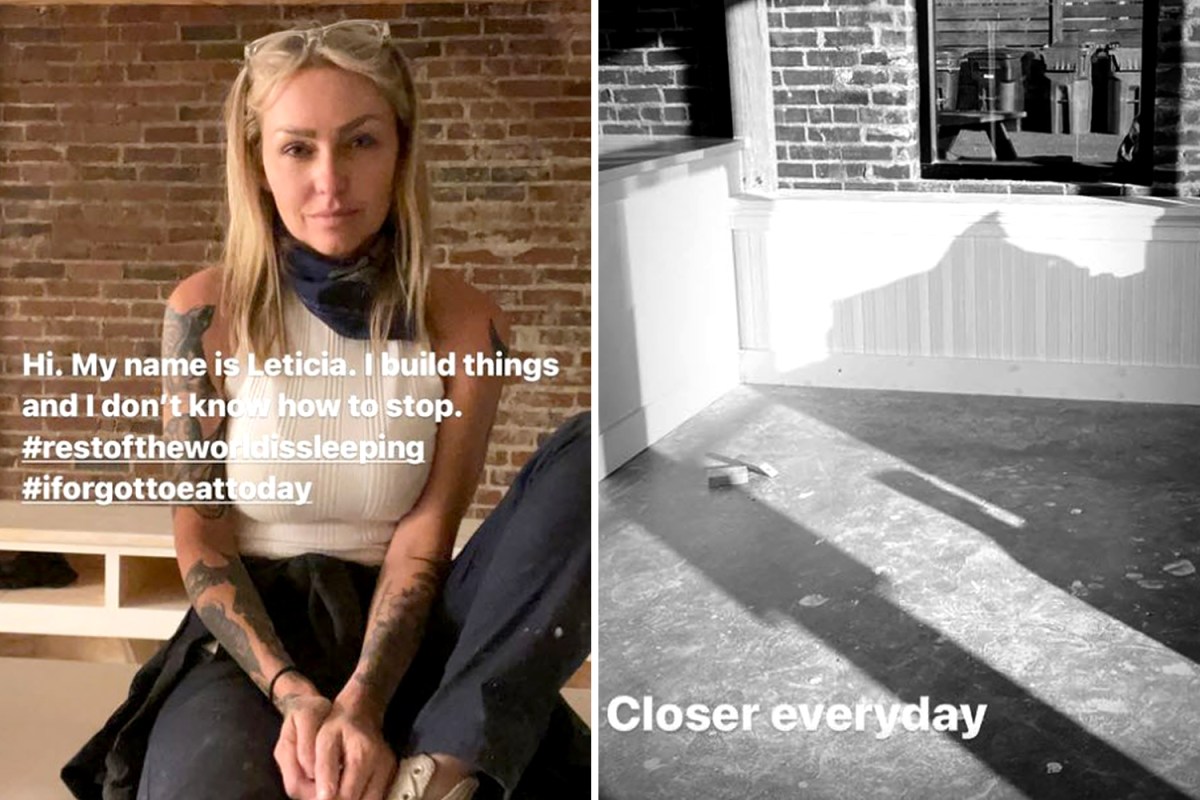 She and Mike recently went on a date to pick up bikes and other vintage finds.

Leticia shared a photo wearing a white tank top, navy pants and a bandana around her neck.

She captioned the snap: “Hello. My name is Leticia. I’m building things and don’t know how to stop. #Restoftheworldissleeping #iforgottoeattoday.”

Leticia also shared a black and white snapshot of a room with a brick wall captioned: “closer every day”.

The American Pickers star, 57, and Leticia, 42, went public with their romance in August during a trip to her hometown of Le Claire, Iowa.

Earlier this month, Mike chose Leticia, as she posted videos to her Instagram Story of bikes, motorcycles, signs, cans and other vintage finds.

Mike’s voice could be heard in the background explaining how his hand had been injured by a dog bite.

Two have gotten serious in recent months, as she was recently pictured with Mike’s co-star Danielle Colby.

In August, Mike and Leticia spent a day shopping and attending a local parade in Iowa.

They were all smiling as she walked her Border Collie dog, Francie.

The two were also spotted sharing a steamy kiss as Leticia got into her van for the next stop.

The Playboy model was then pictured pushing a cart full of groceries, as her boyfriend stopped to take selfies with fans.

The couple also attended a local parade which is part of the Tugfest festival and were later seen at the Tugfest Tug-Of-War festival in Iowa.

The Beauty and the Geek alum once met the TV star’s mother, Rita, and she joined them for the festival.

Mike and Leticia even shared hot kisses during outings.

The happy trio then enjoyed the tug-of-war competition on the Mississippi River between Le Claire and the city of Port Byron, Illinois from a VIP tent.

The new romance comes after Mike’s ex Jodi filed for divorce in November 2020 after 10 years of marriage.

Mike bringing Leticia in for the pickup comes after his co-star Frank Fritz was fired from the History Channel.

Frank, 57, last appeared on American Pickers in a March 2020 episode, as he took time to recover from back surgery, which left him with 185 stitches and two rods in the spine.

In his spare time Frank has lost 65 pounds as he leads a healthier lifestyle and is sober from alcohol.

He told The Sun he went into rehab for alcohol addiction in Iowa for 77 days and had been sober for 11 months.

Although Frank has expressed his desire to return to the History Channel show, Mike revealed that Frank was fired from the show on Instagram in July.

Frank had previously told the Sun about their argument, “I haven’t spoken to Mike for two years. He knew my back was fucked up, but he didn’t call me to ask how I was. It’s just like that.

“It’s good. It’s like you have Aerosmith and there’s Steven Tyler and he’s the leader. I found my place, I’m second and he’s number one in the series. is not a problem with me, maybe he has a problem. “

Despite their feud, Mike, owner of Antique Archeology in Nashville, previously told The Sun he’d like to see his longtime friend on the reality show again.

Mike said: “We all care about Frank and we want him to come back on the show. I’d love to talk to him again, we would absolutely love to do it, but he just can’t get it right.

“Frank goes through a lot personally with addictions. It’s unfortunate that he made decisions that made him the way he is.”

Do you have a story for the US Sun team?

Card and No. 21 Texas face tough trip to Arkansas | Vanburen