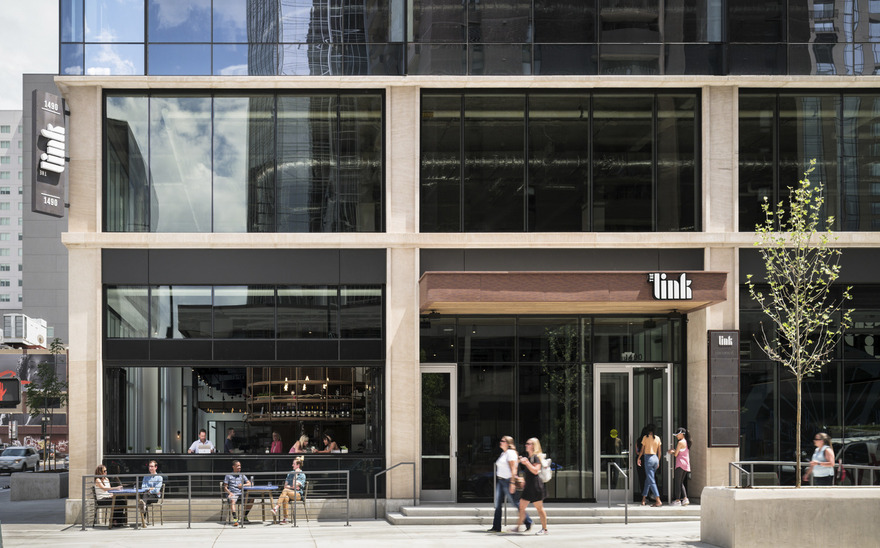 Ask architect Alex Garrison of Gensler about environmental impact and he’ll tell you that the most sustainable building is the one you don’t have to build.

That was the point behind Gensler’s adaptive reuse of a vintage data center in downtown Denver that’s now a sleek office tower called The link. Using glass, reclaimed wood and recycled steel, Garrison spearheaded an effort that transformed a 1960s concrete panel building, without demolishing anything. The result is a new 12-story office building that uses 68% less embodied carbon than an identical new building on the site.

“A lot of people in our market typically come in, buy a building, and maybe renovate the lobby inside,” Garrison, design director at Denver-based Gensler, told LoopNet. “And this one was a much bigger effort. And actually, I would say in Denver, in general, it’s new to the market, to do this magnitude of a renovation.

The project offers a possible solution to scenes unfolding in many cities, especially since the start of the pandemic: old buildings lying fallow and threatening to stagnate a community’s central business district. The Link in downtown Denver takes its name from the building’s longtime owner and occupier, CenturyLink, now known as Lumen Technologies. Garrison said the building once housed a fundamental node in the city’s internet infrastructure.

As part of its corporate consolidation, CenturyLink put the 12-story, 230,000-square-foot building up for sale in 2018, hoping a new owner would transform the underutilized property. A team led by developer SteelWave, design firm Gensler and investment partner Rialto Capital Management acquired the building. The goal was to redesign the amenity-less, mostly windowless data center into a vibrant mixed-use office building attracting technology tenants.

“If you start to look closer where there may be older buildings that seem to be left behind or [located on] streets that are undesirable…what can happen with projects like this is that they become catalysts” for transforming a street, Garrison said. “I think there are a lot of these types of buildings that are this kind of 60s-, 70s-, 80s buildings that might have [repurposed/rehabilitated].”

The development team set itself three goals to realize its vision. First, completely revamp the building and give it a unique architectural identity. Second, not just to donate amenities to The Link, but “to create an amenity package for this building that was far above what’s typical in the Denver market,” and reminiscent of a hotel, Garrison said. And third, improving the building’s energy efficiency, which hadn’t been improved since the 1960s, while preserving the existing structure to reduce costs and reduce new use of the site’s carbon footprint.

As more automakers produce electric cars and more power grids use clean energy, construction industry processes remain major obstacles to global decarbonization. The production, transportation and erection of concrete, steel and aluminum all generate significant greenhouse gas emissions. Any building material that can be preserved is one that is unlikely to end up in a landfill. According to a 2018 report by the International Energy Agency, building operations and construction combined are responsible for almost 40% of annual global carbon dioxide emissions.

“I would say that a [building material] perspective, I think there’s really nothing you can rule out” in adaptive reuse, Garrison said.

When it comes to new materials at The Link, Gensler primarily used glass.

There are light bulbs in the facade of the old gas and electric building next to The Link. Gensler, which targets tech tenants at The Link, had a clever idea for its own facade: glazing the building’s new glass with three different reflectivity coatings. Now the building displays different shades of color, mimicking the binary code of a computer that changes with the reflection of the sun. It’s also a design that, like its former gas-and-electric neighbor, pays homage to the residents of the building, Garrison said.

Inside, reclaimed wood and Corten – or weathered recycled steel with a warm rust-colored finish – adorn the building’s ground floor tenant: a café that converts into a wine bar the night. NanaWall folding glass doors help open the cafe to the street and make The Link’s glass facade more transparent. Meanwhile, a custom fireplace using fabricated Corten makes the building’s lobby more comfortable, Garrison said. Guests can play pool in the lobby, and SteelWave’s office managers also double-duty as building concierges on the ground floor, adding to the hospitality of the lobby.

The side of the building facing an alley previously had no windows, so the team added windows to bring in more daylight. The building also had no outdoor space before, so Gensler created some by cutting off part of the roof and building a 12th-floor rooftop terrace adjoining a fitness center and indoor lounge.

The Link opened in April 2021, with SteelWave as anchor tenant.

The project was not without its challenges, particularly the pandemic, Garrison said.

“COVID-19 was a challenge,” Garrison said. “Construction of The Link renovation began just before we were hit by the pandemic, so when everything was locked down except for essential workers, which included construction, we quickly adapted to a hybrid model where most meetings were over Zoom and in-person coordination was done entirely with face masks and hand sanitizer. The general contractor, Haselden, did an incredible job adhering to safety protocols – in moving teams to limit density and keeping the site clean.

Through adaptive reuse, Gensler was able to transform the building while reusing its core steel, concrete and masonry elements. Other 1960s fixtures — like the building’s elevators, plumbing and heating systems — have also been retained, with minimal upgrades, Garrison said.

The Link has an embodied carbon footprint of approximately 4.3 million pounds of carbon dioxide, about one-third of the 13.5 million pounds an equivalent new building would generate. In another effort to reduce the building’s negative impact on the planet, The Link has as many parking spaces for bikes as cars.

While top downtown locations that command prime rental rates are the most likely candidates for this type of work, Garrison noted that “every structure built has possibilities.

“By capitalizing on the good structural bones already built all around us, we have great opportunities to transform seemingly derelict buildings into projects that embrace contemporary well-being,” he said.